Porsche drivers Earl Bamber and Laurens Vanthoor have described their "chemistry" as a duo as a key factor behind their IMSA WeatherTech SportsCar Championship GT Le Mans title success.

Bamber and Vanthoor sealed the title with a fifth-place finish in Saturday's Petit Le Mans finale in the Coca Cola-liveried #912 Porsche 911 RSR they shared with Mathieu Jaminet.

It capped off a season in which the pair scored three wins - matching the tally scored by Nick Tandy and Patrick Pilet in the sister #911 car - and an additional four podiums in their second season of IMSA competition together.

Bamber says he sees his partnership with Vanthoor as one that could go on to have championship success "for a long, long time".

"Laurens and myself, we had a goal to win the championship over here," said the two-time Le Mans 24 Hours winner. "We tried to do it last year, but to do it in the second year in the driver pairing is something really, really special.

"I think it's definitely one of the toughest championships to win here. Everyone's at the highest level and I’m super-thrilled to take the championship home for Porsche.

“What’s super-nice is we have our strengths and our weaknesses as drivers. There’s always holes and gaps, when I came back from the LMP1 program [in 2017], and we were talking about line-ups there was no doubt in my mind who I wanted to join up with.

"I knew we were the same age, and had similar passions. I knew we could be a solid pairing for a long, long time. I think we could continue to win championships.

Vanthoor joined Porsche's CORE autosport-run IMSA program in 2017 but did not have a permanent teammate until the second half of the year, when Gianmaria Bruni's period of gardening leave expired following the Italian's decision to sever ties with Ferrari.

With Bruni switching back to WEC for 2018 and Porsche's LMP1 project coming to an end, Bamber was selected to partner Vanthoor in the #912 machine that season.

"I think Earl and myself, we’ve tried to work really hard since these two years," recalled Vanthoor. "It was literally our goal this year to try and win this.

"I joined Porsche [from Audi] three years ago. I wanted to go to America. It was kind of a dream to race here at one point and race for Porsche.

"When I came here I basically didn’t know anything. I didn’t know the teams, the tracks, the rules, not the car, nothing. For me to come away now with the championship in the books is something I’ll be really proud of.

"It’s a really cool achievement. And together with my mentor buddy, Earl. It’s quite a dream come true. I think that’s key in the end.

"It’s important that you get along with each other. Luckily, I think we have that. Probably the best relationship I’ve ever had with a teammate. It was a very close outside the track and that’s important to work together.

"We have to go through so many times and hard parts and we have to be able to rely on each other. I think that makes each other strong. It's been a fantastic journey.”

Petit Le Mans marked the final race outing for Porsche's current 911 RSR, as it gets set to campaign its all-new 911 RSR-19 in IMSA for the 2020 season. 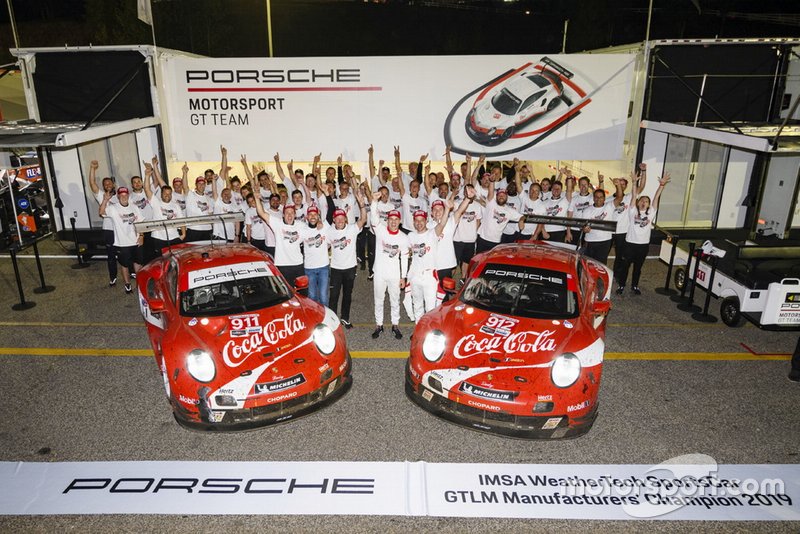 Bamber "made a meal" of run to Sebring 12 Hours win