Townsend Bell says it was a relief to add to the Lexus RC F’s win tally after a final lap in which he lost and then regained the lead of the GT Daytona class in the 2020 IMSA WeatherTech SportsCar Championship.

The AIM Vasser Sullivan #12 pilot, whose co-driver Frankie Montecalvo had trailed polesitting teammate Aaron Telitz through the first stint, turned the tables following the team’s second scheduled stop. Montecalvo pitted to hand off to Bell one lap before Telitz did the same to Jack Hawksworth, and although the latter emerged ahead, Bell now had warm tires and used them to full advantage to gain momentum out of Turn 3, and then slipstream past Hawksworth down the hill to Turn 5.

Hawksworth, who with Telitz won the Daytona and Sebring races last month, largely kept pace with Bell but didn’t threaten, and towards the end of the final dry stint started losing fractions of a second and lost second place to Bill Auberlen’s charging Turner Motorsports BMW M6. Both cars pitted for wets in time to resume in 1-2 formation as the track became awash, but following the restart, both had to concede to the charging Acura NSX of Mario Farnbacher – only for the Meyer Shank Racing driver to fall off at The Kink.

Bell recalled: “Mario Farnbacher was coming. We know he’s really good in the wet conditions. We’ve seen that before.

“It was so treacherous on those last few laps. He (Mario) got by me and then I kind of hung onto him and then he sent it off into the Kink. There was standing water everywhere. I was just grabbing gears wide open and my Lexus hooked up and there we were in the lead!

“We needed a win. Frankie has been doing such a good job on the starts and has been giving me such a good car. I felt like today was our day. Proud of everyone at AIM Vasser Sullivan.

“It’s been really satisfying for the team to have the 1-2 qualifying and the 1-2 finish, but quietly we get a little frustrated because we want a chance at the top step, too.

“The key moment of the race for us, other than that last crazy lap in the rain with Farnbacher, was with the pit stop where we did the driver change. I think they [#14] had a little issue and when Jack came out of the pits I got by him exiting Turn 3. I had a run and I knew that was my chance. If we didn’t make it happen there, it was probably going to be tough to get something done. I got the position and just settled into a good pace and off we went.”

Montecalvo, for whom this was a first IMSA win, added: “Townsend and I have been trying really hard to get this win for the #12 car. It’s great for the guys.

“Everything worked out for us in this race. It feels amazing. I think they made a phenomenal call in the pits right at the perfect time. It was a great race for us.”

Hawksworth, who salvaged third, congratulated his teammates and added: “We had some issues and then the visibility was poor after the final race restart. All in all, not a good day but we came away with a good result.”

Early leader Telitz, who had qualified on pole by over three-quarters of a second, commented: “I had a good stint… I pulled out a good gap and I had a bit of a dodgy in-lap with some GTLM traffic and that just set us back a little bit, right before Jack took over.

“[But] when you feel like you had a bad day and you finish third, I think that’s still a really good day. Stoked about that and happy to be on the podium in my home race. Congratulations to the 12 AIM Vasser Sullivan team on the victory.” 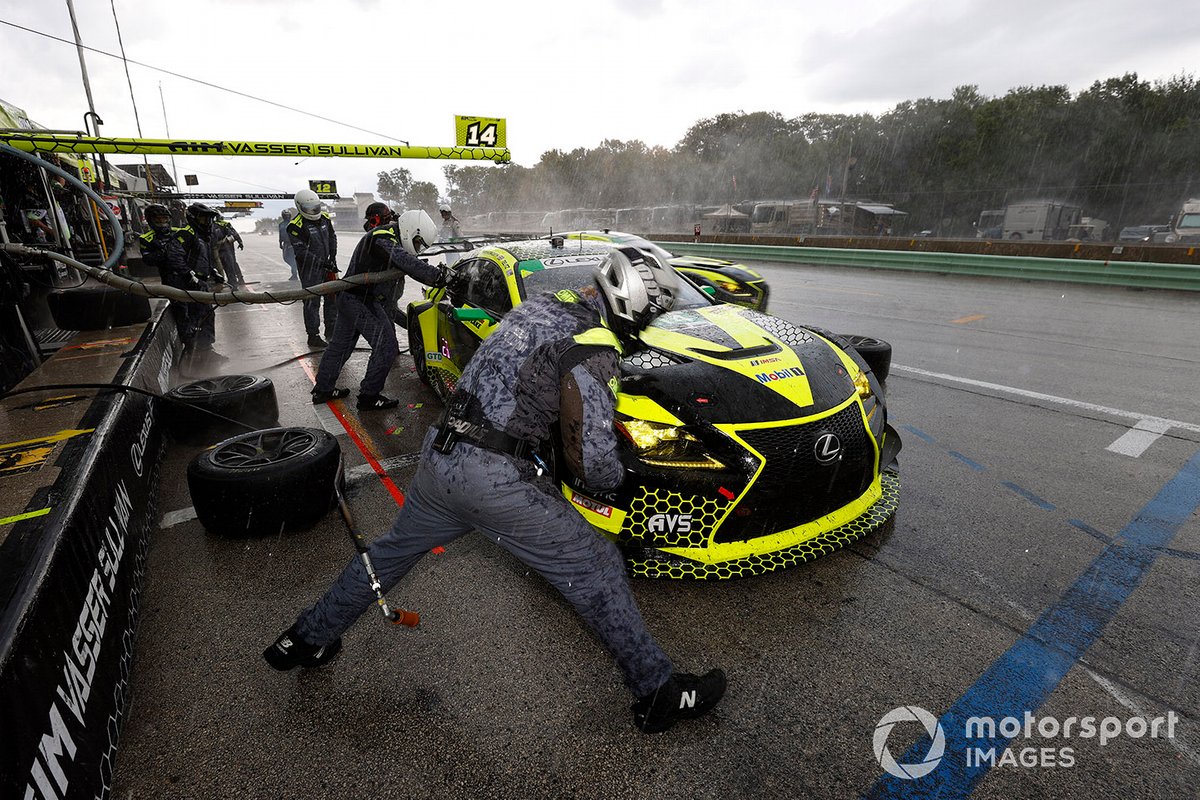 The #14 Lexus of Hawksworth/Telitz gets beaten out of pitlane by the sister car of Bell/Montecalvo in the rain-soaked closing stages of the Road America race.