“An ultimate start to the year, “said Gordon McDonnell, BMWNA Motorsport Manager. “We know the BMW is strong at Daytona and a 1-4 in GS and a 1-2 in ST is fantastic – especially in the BMW Performance 200. Congratulations to all the BMW teams and I hope this kind of success is something we can continue.” 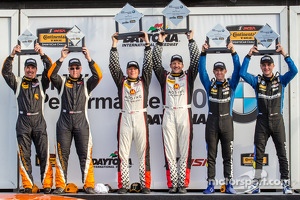 Jeff Mosing and Eric Foss, in the No. 56 Murillo Racing BMW 328i, led the No. 81 Bimmerworld BMW 328i to the checkered flag in the Street Tuner class. The victory was the first CTSCC win for both Mosing and Foss. BMW drivers also finished 6-10th in the ST class.

“That was my first start from the pole,” said Mosing. “It was the first time I have felt “butterflies” in quite a few years. Ken (Murrillo) sets the car up for the entire race and the lap times showed that all race long. Eric did a great job to finish the race. With a bit of luck, I believe we’ll be strong all year.”

No. 33 Viper GT3-R stays on pace in Friday’s final practice for The Rolex 24

IndyCar silly season: Who's going where in 2017?