Woodcliff Lake, N.J. – At the mid-point of the 62nd annual 12 Hours of Sebring BMW Team RLL races in the third and tenth positions in the GTLM class. The first race at Sebring for the new TUDOR United SportsCar Championship has been slowed by eight caution periods, the sixth bringing out a red flag that halted the race for six minutes, in the first six hours. 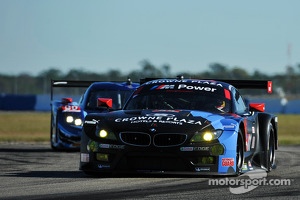 The No. 55 Z4 currently runs in the third position having had a relatively trouble free race so far. Bill Auberlen started the race from the third position, running two stints before handing off to Andy Priaulx, pitting from sixth.

Joey Hand took over on lap 79 under the fifth caution period of the race at the 3.41-hour mark.

He carefully picked his way through the field, reaching second place before pitting for fuel just before the six-hour mark.

Dirk Muller started the race in the No. 56 Z4 from the second position. Just before the 3-hour mark the No. 56 Z4, with Dirk Werner now behind the wheel, was swept up in a wreck started by the No. 62 Ferrari inflicting damage to the left front of the BMW. He pitted for repairs, a new wheel and tire, and returned to the race in the seventh position as the field circulated under the fourth caution period of the contest. Werner was back in the pits a few minutes after the green flag waved for continued repairs, falling four laps behind the class leaders. Additional pit stops cost him an additional three laps. At the mid-point John Edwards is behind the wheel of the No. 56 Z4, racing in the tenth position.

Bill Auberlen, driver No. 55 Z4 GTLM – “At the beginning quite a few drivers were bumping into each other. I took it pretty easy and laid back. On my second set of tires, which were a medium compound, everything was great with the car. We just started fighting our way up the leader board and I was catching the Corvette. I think we have a very good, strong car. After Andy got in the door wouldn't shut! All that work and we had to come in for a pit stop to shut the door.”

Andy Priaulx, driver No. 55 Z4 GTLM – “That was a very challenging time. I was driven off the road in Turn 16 by a competitor who seemed to be oblivious to any other car on the track. On top of that we’ve lost a bit of the handling we had earlier in the week, but the crew will work to get us back to the sweet spot.”

Dirk Müller, driver No. 56 Z4 GTLM – “I had a brilliant start to the race. Unfortunately there was a mess in turn two and I got really hit hard from behind. We had minor damage to the rear of the car, but it was not affecting my driving.”

Dirk Werner, driver No. 56 Z4 GTLM – “It was a wild experience, but also a very disappointing one. At one point a Porsche drove into me in turn one, putting me into the wall. The entire front fascia had to be changed. Before that, the Z4 was running really good, I think we were in P2 and now we have some laps to the leaders. Still six hours to go. It will be tough to get back to the front, but we will try.”

A different type of Sebring tradition

My job in F1: Chief strategist at Sauber