Bomarito on Mazda's Watkins Glen 1-2: “We just had to be perfect”

Jonathan Bomarito, who along with Harry Tincknell and Olivier Pla led a Mazda Team Joest 1-2 in the Sahlen’s 6 Hours of Watkins Glen yesterday, says the RT24-Ps were so fast that fulfilling their potential came down simply to “execution”. 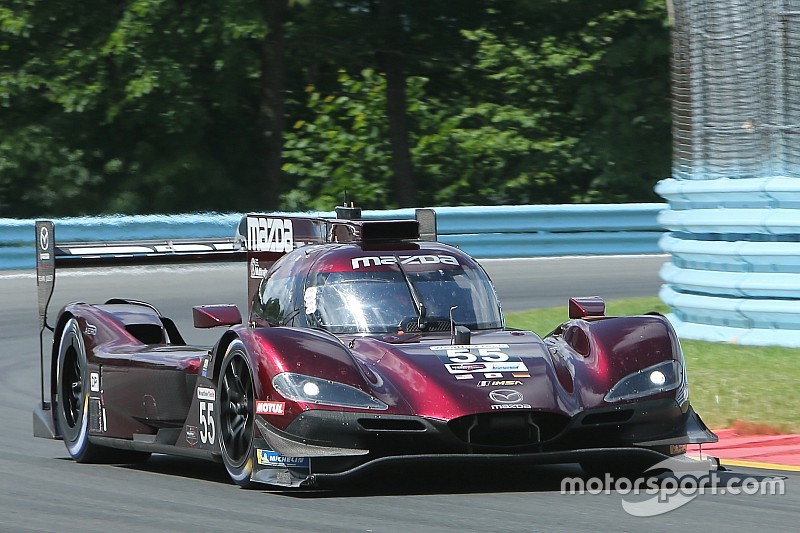 The pole-winning #77 car of Oliver Jarvis, Tristan Nunez and Timo Bernhard, and the #55 sister car combined to lead a total of 183 of 211 laps, their only outside challenge coming when the Acura Team Penske piloted by Juan Pablo Montoya got ahead of them following the penultimate round of pitstops.

Tincknell, however, made a pass on Acura ARX-05 at Turn 8 of the 3.4-mile course in New York state, and at the final stop, the Joest team got the #77 back up to second. Tincknell would lead Jarvis past the checkered flag by a mere 0.353sec.

Bomarito who was a part-timer for Mazda Prototype program in 2015 before being signed up full-time for ’16, declared: “I guess it was just meant to happen this way, to be first and second for the first victory, with both Mazda RT24-Ps deserving of the win. I've been with Mazda for so long, through so many of the ups and downs. So much perseverance has gone into this, from the people at Mazda, to the team, to our engineering staff and the drivers. It's such a special moment and I'm so glad to be a part of it.

“Today was just about execution because we knew we had fast racecars, we just had to be perfect, and I think we were.

“This is the best moment of my career, because of all the people, time and energy that has gone into this program. The sense of accomplishment feels great, but I'm already thinking about next weekend. Let’s go get two in a row!”

Teammate Tincknell chastised himself for qualifying only fourth, behind teammate Jarvis and the two Acura Team Penske entries, but said the race went according to plan.

“I want to make the most of this opportunity every single time and I didn't feel as though I did that yesterday,” he said, “but we rectified that straight away by taking third place by the first corner and leading the race in the second hour.

“It was such a team effort today to have both Mazda RT24-Ps lead the race. The six drivers worked together so well, and we've improved so much as we push each other. The pit stops were perfect, and the car was perfect.”

He also praised Joest Racing, who took over from SpeedSource in running the cars back in July 2017.

“For the Mazda Team Joest boys and girls, who have put more than two years into this, we are so grateful for their efforts and so happy to bring the car to Victory Lane. This win is for all the Mazda fans, the employees, the dealers and all the supporters all over the world. I have said all along that the first win will open the door to more and I hope that's the case."

Olivier Pla, the #55 car’s ‘third driver’ for endurance races, set the fastest lap of the race and stated: "I'm so happy to get this first win for the team, and with these two guys. We were flying all year, and at each race we knew we had the pace to do it.

“Today was our day. The Mazda RT24-P was fantastic. I had a blast during my stint - I could push really hard and we finished the job. It was a really good day."

John Doonan, director of Mazda Motorsports North America said: “It's been an amazing journey. We've been close but we never gave up - that's the Mazda philosophy, to never stop challenging. The goal was to put it on the top step for the fans, the people who drive Mazdas, the people that race Mazdas, the people who sell them and for all of the corporate staff in Japan, the United States, Europe and the rest of the world.

“This is the day we've been waiting for. We really felt that today could be our day, so we would focus on racing the other cars and not each other. But in that last half-hour, you listen to every click on the radio worried that something would come.

"To see that Soul Red Crystal Mazda RT24-P cross the finish line makes this such a special day. This is a group victory for the Mazda brand, and the people as well. I couldn't be happier."

Magnussen on win drought: “Hard to come up with excuses”