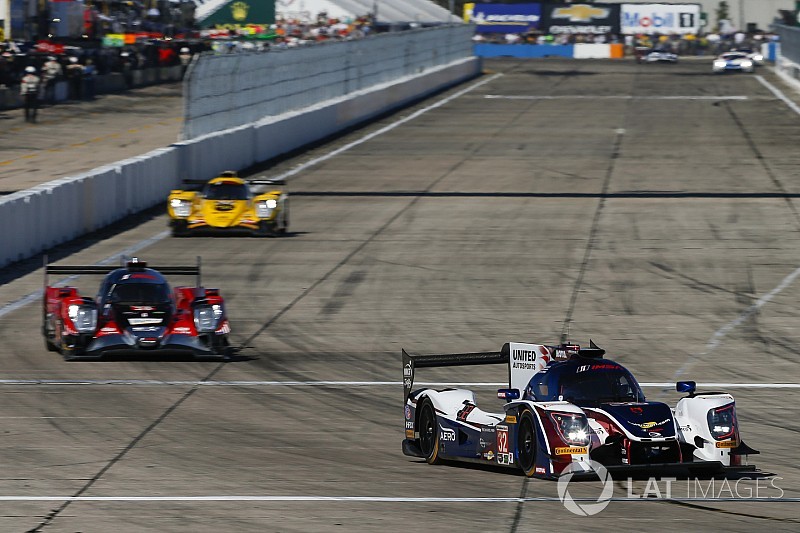 Di Resta and teammates Phil Hanson and Alex Brundle - standing in for an unwell Bruno Senna - finished fifth in Saturday's Sebring 12 Hours, and second among the LMP2 contingent.

IMSA operates a BoP system to allow LMP2s to race against the Daytona Prototype International (DPi) cars in the same class, based around the theoretical performance of the fastest LMP2 car.

But in both the Rolex 24 at Daytona season opener and at Sebring, the DPi cars have held a decisive advantage in qualifying and race trim.

DPi entries swept the top 10 in qualifying for Sebring, and locked out the podium in the race with the #22 ESM Nissan Onroak taking the win ahead of two Cadillac DPi-V.Rs, the #10 car of Wayne Taylor Racing and the #31 of Action Express Racing.

Ex-Formula 1 driver di Resta, making only his second sportscar racing start at Sebring, believes IMSA must urgently address the disparity between the DPis and LMP2s.

“Overall a satisfying result – fifth, and on the lead lap, is a decent result taking into account that currently it is totally impossible to race against the DPi cars," he said.

"The Balance of Performance is an embarrassing waste of time – IMSA must get it sorted if they want teams from Europe to head here.”

United owner and McLaren F1 CEO Zak Brown echoed di Resta's sentiments, saying the LMP2 teams "cannot currently compete" against their DPi rivals with the rules as they are.

“I’m extremely proud of our team’s performance but it’s abundantly clear that the LMP2 class cars are in another category [compared to DPi]," said Brown.

"LMP2 cars cannot currently compete on development and subsequent pace. We are racing with the hope the DPi cars are unreliable. We didn’t have the speed to race them here.”

United is only entered for the four Tequila Patron North American Endurance Cup races of the 2018 IMSA schedule, and will make its next appearance at Watkins Glen at the start of the July.