After topping the time sheets in all four practice sessions, the Ford Rileys qualified sixth and ninth.

“It was as great qualifying for us,” said Bourdais. “We didn’t exactly know where we were going to be. This morning we couldn’t put a lap together because traffic was a bit of a difficulty. I didn’t really have any expectation of putting the car on pole.” 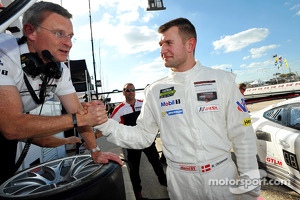 Scott Dixon will start sixth in the fastest of the two Ganassi Ford Rileys. The other Ganassi car qualified ninth after a spin by Scott Pruett. The Fords were expected to do better in qualifying given their performance in the pre-race practice sessions and the larger engine air restrictor they are using this weekend. But they could do no better than sixth.

“The track was very slippery, but the car behaved very well and I was able to put in a very good lap,” explained Junqueira. “I was surprised by the big margin [to second].”

Parity was the common theme in the two GT class qualifying sessions.

The top-seven cars in the GT LM class qualified within a second of one another. The pole went to the Porsche of Michael Christensen, who lapped the Sebring course in 1:58.933. Dirk Mueller qualified second in the BMW Team RLL BMW Z4 GTE, followed by his teammate, Bill Auberlen, and the two factory-backed Corvettes (Oliver Gavin and Antonio Garcia, respectively). The best Ferrari (Risi Competizione) was seventh thanks to Gianmaria Bruni and the fastest of the factory Vipers ended up eighth in the hands of Kuno Wittmer. 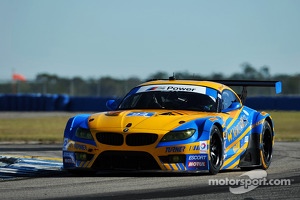 “When it’s so close, it’s going to be long, long race,” said Christensen, who’s making his Sebring debut this weekend. “It’s going to be crucial to be in a good track position at the right time at the end of the race. We’re going to need to stay calm and patient.”

The top-15 in the GT Daytona class were separated by less than a second. Dane Cameron set the fastest lap (2:04.258) in the No. 94 Turner Motorsport BMW Z4. Cameron’s lap was one-hundredth of a second better than Leh Keen’s best lap in the No. 22 Alex Job Racing Porsche. The No. 33 Riley Motorsports Viper of Jeroen Bleekemolen was third quickest.

“GTD has been insanely competitive,” said Cameron. “I just glanced briefly at the time sheets and it looks like the top five, six, seven cars are within hundredths of a second, which makes this pole that much more special. This places even more emphasis on the team for tomorrow. It just goes to show you cannot give-up any time be it in pit lane, car performance, driver performance, traffic, anywhere because you be able to get it back. It’s too equal.”

The No. 007 TRG Aston Martin Vantage (James Davison) and the No. 63 Scuderia Corsa Ferrari (Alessandro Balzan) 458 rounded out the top-five in GT Daytona.

61 cars entered for IMSA's Roar Before the 24 at Daytona