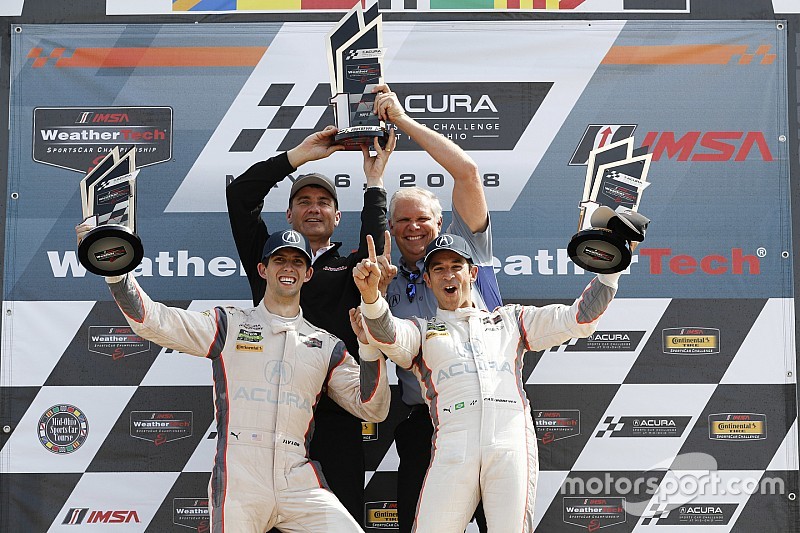 Helio Castroneves says his first full season in IMSA sportscars taught him to compromise for the sake of a co-driver and to learn the car quickly, and explains that unfamiliarity with the new IndyCar aero package probably contributed to his shunt at Indy.

Speaking to Motorsport Report’s Julia Piquet, Castroneves admitted there was a lot to learn in his first year of racing in the IMSA WeatherTech SportsCar Championship, driving Acura Team Penske’s ARX-05.

“The good news for me is that the transition got a little better because I’m still in the same team, that helped me," he said. "Same guys I worked with for a long time, same engineers I worked with a long time. So when we got talking about the racetrack, they knew what I meant in relation to setups and things I wanted. But it was certainly hard.”

Castroneves did admit that IMSA’s Balance of Performance adjustments frustrated him but believes the situation of trying to equalize performance may be eased next year as the Prototypes are divided into separate DPi and LMP2 categories.

“The car was phenomenal, the Acura team did a phenomenal job,” he said. “We did face challenges but I don’t think the challenge was performance. We were fast, we showed a lot of potential.

“The rules about BoP [Balance of Performance] were something I learned this year – very frustrating… Hopefully the rules next year, we won’t be as penalized as we were this year. When we first went out there we said, ‘We’re not going to play games, we’re going to show exactly what we came here for, and hopefully our work will pay off.’ Unfortunately politics is part of the sport. I would say that was the toughest part.

“But hopefully next year with DPi and LMP2 separated out that will help us not be as penalized as we were this year.”

Compromising for the sake of a co-driver did not come naturally, Castroneves admitted, but he was relieved to discover that Ricky Taylor had fairly similar tastes in car handling.

“In Ricky, I could not have a better partner,” he said. “He is a young guy… so fast, so technical, the way he sets up the car is – thank God – very similar to us. It helps that he pushed me. He put in some amazing laps.

“He’s taller than me so I had to do some adjustments to the seat, but that’s the type of things you have to start thinking about that are different from IndyCar, where it’s just your car, just your setup, just yourself. Here you’re thinking about compromise…

“But the biggest challenge for me was I need to learn more about the car. In practice you get about five or seven laps max, and now the other guy’s gotta go. So you break the rhythm.”

Castroneves/Taylor led an Acura 1-2 at Mid-Ohio but the Acura Team Penske squad ultimately finished fifth and seventh in the championship in its first season. Asked if he thought Roger Penske’s sportscar squad would be ready to challenge for the titles in 2019, Castroneves responded “Absolutely: I felt that we learned a lot this year and I do feel that we have a phenomenal chance to make a big difference from fifth and seventh in the championship. I feel that we’re going to be a contender for sure.”

Regarding his two-race return to the IndyCar Series where he made his name, Castroneves told Piquet that it had been difficult to adapt to an open-wheel car that had been shorn of so much downforce since he’d last driven one. That, he feels, contributed to the shunt that took him out of the race, while running fourth, on Lap 146.

“I had the opportunity to drive on the Chevy simulator which helps but it’s still not the same,” he commented. “Driving at the IndyCar Grand Prix [on the IMS road course] helps to bring back a little bit of the rhythm. However, it was a different package of aerodynamics.

“Driving [in the 500], I do believe the cause of the crash was very, very unusual. I had no signal… I was not pushing. Basically the entire race I was taking it easy, waiting for the right time which I felt that was the right time.

“And in normal conditions I would say that if I knew the car, I wouldn’t have that scenario happen, so it was a little bit unexpected.”

He went on to explain the variety of possible contributory factors in the shunt.

IndyCar encouraged by Australia talks for 2020