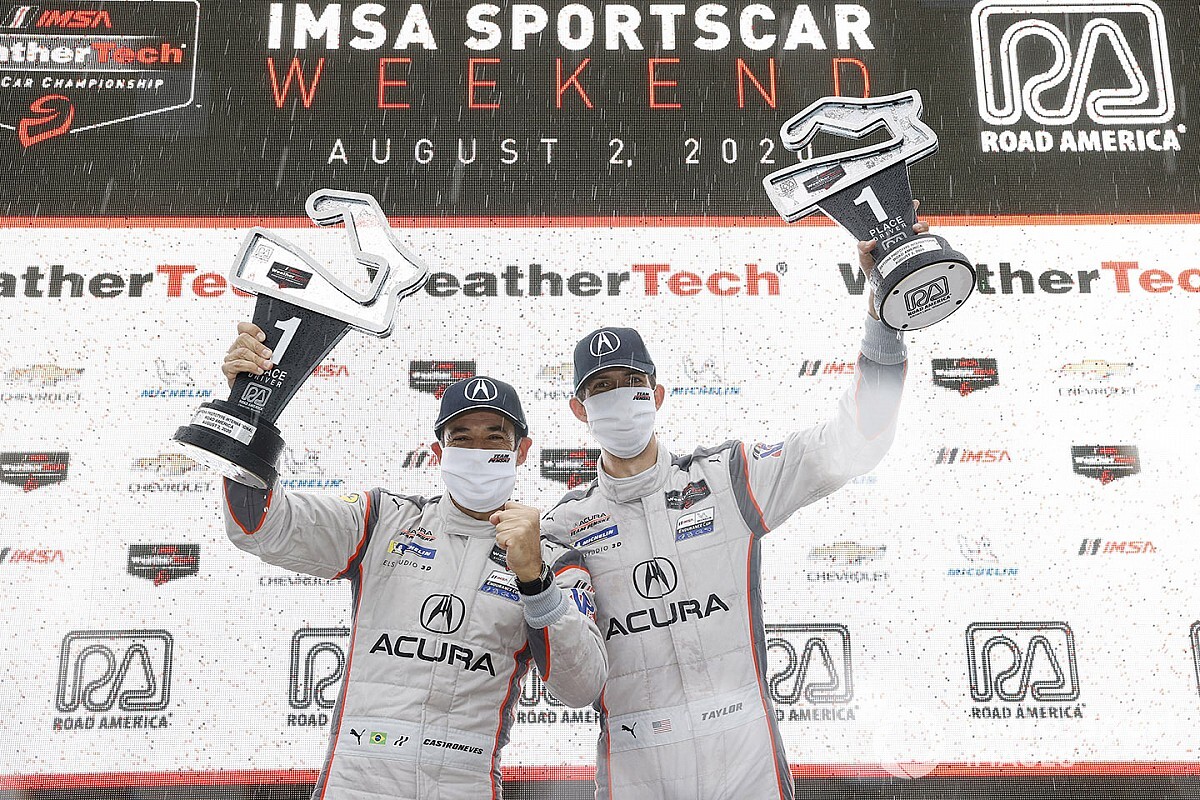 A heavy downpour that caused several accidents and triggered a race stoppage could not prevent Helio Castroneves from driving the Acura Team Penske car he shares with Ricky Taylor to a first IMSA WeatherTech SportsCar Championship victory in over two years at Road America.

Taylor burst away from pole at the start in the #7 Acura ARX-05, while Harry Tincknell’s Mazda RT24-P got the jump on the second Acura of Dane Cameron but had to concede the spot when the #6 ARX-05 passed him around the outside of Turn 5.

Behind them Tristan Nunez in the #77 Mazda held fourth ahead of the four Cadillacs – Ryan Briscoe (Wayne Taylor Racing), Felipe Nasr (Action Express Racing), and then the two JDC-Miller Motorsports cars of Joao Barbosa and Chris Miller.

As they lapped GT traffic, Nunez passed Tincknell for third at Turn 1 on Lap 13, which allowed him to close on Cameron, who dropped 3.5sec from leader Taylor. Nunez applied the pressure for a couple of laps, but Tincknell re-passed him on Lap 16 and then pitted. So too did Barbosa and next time by both Acuras stopped.

On cold tires, Cameron ran a little long at Turn 5, moved left to block the eager Tincknell in his warm-tired Mazda but the front of the RT24-P was already there. The two cars made contact, and the Acura picked up a left-rear puncture. For his blocking move, Cameron would also receive a drive-through penalty.

The Mazdas were all over the leading Acura when Taylor and Tincknell pitted. Castroneves took over the #7 Acura, but Tincknell stayed aboard Mazda #55. Nunez went a lap longer before handing over to Oliver Jarvis and that was just enough for Jarvis to emerge ahead, but on cold tires he had to concede to the Castroneves vs Tincknell battle.

By Lap 42, Castroneves, Tincknell and Jarvis were covered by 1sec, and 14sec ahead of Renger van der Zande who was now in the WTR Cadillac, working hard to hold off AXR’s Pipo Derani.

Castroneves and Jarvis pitted from first and third respectively on Lap 50, while Tincknell stayed out in the #55 for one more lap before handing over to Jonathan Bomarito, but it was a long stop and he fell to third. However, Mazda’s prospects took an upturn as Jarvis got a strong run through Canada Corner and passed Castroneves to take the net lead.

However, then the rain hit the track, sending Derani off the track at Turn 3. Van der Zande managed to get to the pits for his scheduled stop and was able to neatly switch to wets at just the right time. Jarvis stayed out rather than pit, and when the caution flew for a GTLM car in the sandtrap, that trapped him outside the pits as pitlane closed.

Now Jarvis was leading but with wet-shod van der Zande behind him, and pursued by Castroneves, Bomarito, Sebastien Bourdais (taking over from Barbosa in the #5 JDC Cadillac) and Derani. Then the red flag was thrown, and with 30mins to go the clock was stopped.

When the cars got rolling again with little more than 20mins to go albeit under yellow, Multimatic elected to roll the dice and leave Jarvis out on slicks. Derani pitted, allowing AXR to repair the damage he incurred before the stoppage. However, Jarvis peeled into the pitlane in the restart with less than seven minutes to go, leaving van der Zande out front ahead of Castroneves, Derani and Bomarito.

However, van der Zande ran wide at the final corner, allowing Castroneves into the lead, and leaving himself vulnerable to Derani. Bourdais was up to fourth ahead of Bomarito and Jarvis.

On the final lap the full course yellows flew for a GTLM shunt, so Castroneves passed the checkered flag 0.383sec ahead of van der Zande. Derani finished third followed by Bourdais and the two Mazdas.

In LMP2, Simon Trummer and Patrick Kelly dominated for much of the race in the PR1/Mathiasen Motorsports car, but the rainfall caused Trummer to go off after making contact with Juan Pablo Montoya in the #6 Acura, leaving class victory to the DragonSpeed entry of Ben Hanley and Henrik Hedman.

The #3 Corvette of Jordan Taylor passed Porsche’s polesitter Laurens Vanthoor on the opening lap, while the BMWs jumped the second Corvette of Oliver Gavin to claim third and fourth. Yet by Lap 6, the BMWs were already almost 3sec adrift of the #912 Porsche, and clearly holding up Gavin and the #911 Porsche of Frederic Makowiecki.

After a dozen laps, and having moved aside for the Prototypes for the first time, Taylor found Vanthoor filling his mirrors and it took only a couple of laps before the Porsche got ahead when the ’Vette ran wide at Turn 7. Taylor would also drop behind Spengler’s BMW. Teammate Gavin had been struggling from the start, IMSA Radio reporting that an electronics glitch was messing with the #4 car’s traction control.

Taylor pitted on Lap 19 and handed off to Antonio Garcia, while out on track, Makowiecki passed the BMW of Jesse Krohn for what was now third place.

Once all the pitstops had shaken out, Earl Bamber now in the #912 Porsche was leading ahead of Garcia, with Connor De Phillippi now installed in the #25 BMW in third ahead of Nick Tandy in the #911 Porsche, John Edwards in the #24 BMW and Tommy Milner in the #4 Corvette. Soon Tandy would have to cede fourth to Edwards.

Garcia had fallen 15sec behind leader Bamber by the time he made a second stop with 75mins to go, but for the second time there was a delay, this time due to a faulty wheelgun.

However, Corvette Racing’s chances took an upturn when Bamber – who had tried to stay out an extra lap on slicks as the rain dumped heavily around the track – couldn’t stop for Turn 1 and skated across the sandtrap and into a tire wall, bringing out the full-course caution and ultimately the red as the rain worsened.

When it went yellow before the restart, Tandy was out in front but on slicks and needing a fuel stop, so when the pits opened, he ducked in as did Milner and De Phillippi (who had a loose wheel).

That left John Edwards’ #24 BMW in the lead of the class with Garcia in second, but on the final lap Edwards and third-placed Tandy both went off at The Kink, leaving Garcia and Milner to take a remarkable 1-2 for Corvette, with Edwards coming home third ahead of Tandy – who never actually saw the checkered flag – and Bamber.

Foley, suffering a dislocated knee from his shunt on Friday, was the first of the frontrunners to pit and hand over to his co-driver, Bill Auberlen. The Lexus pair stopped on consecutive laps afterward, but now Frankie Montecalvo’s co-driver Townsend Bell in the #12 was leading Aaron Telitz’s co-driver Jack Hawksworth in the #14 – and the pair were only 5sec ahead of Auberlen.

Riley Motorsports had got Robinson’s co-driver Lawson Aschenbach out ahead of the Compass McLaren now piloted by Paul Holton. The big loser in the pitstop shuffle was Scuderia Corsa, whose Toni Vilander now ran behind the Meyer Shank Racing Acura NSX GT3s of Mario Farnbacher and Alvaro Parente.

Auberlen’s charge drew him to within 2.5sec of Hawksworth’s Lexus by Lap 35. That gap kept coming down, Bell pulling out 3.5sec on his teammate by Lap 42 as Hawksworth came under pressure from Auberlen and finally the Briton gave up second place to the Turner BMW at Turn 1 on Lap 44.

The pitstop sequence saw Bell not only retain his lead, but also Hawksworth and Aschenbach vaulted ahead of Auberlen. However, following the restart, nothing could stop Farnbacher who slashed his way forward, finally passing Bell for the class lead by going around the outside of the Lexus at Canada corner. However, after that brilliant maneuver, Farnbacher apparently spun at Turn 11, handing back the lead to Bell who was thus P1 when the full course yellow flew again on the final lap.

Hawksworth held on for third ahead of Vilander, Pat Long in the Wright Motorsports Porsche 911 GT3 R who also surged forward in the wet, and Auberlen.