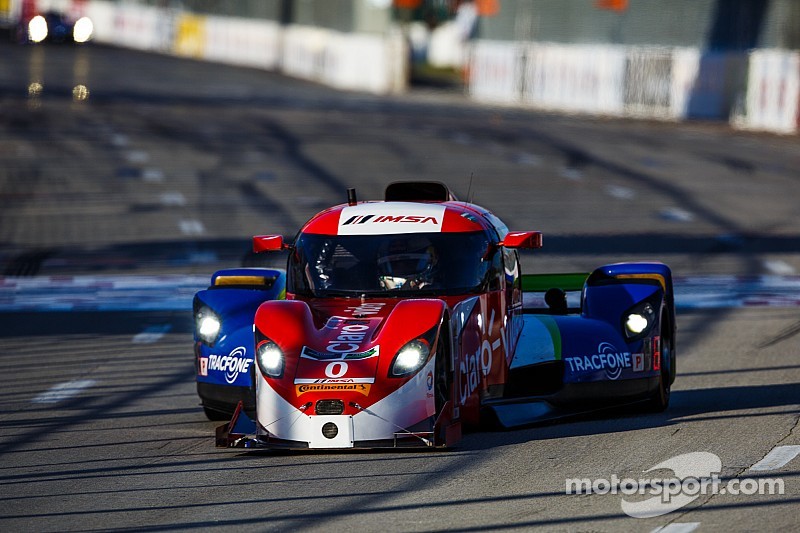 The lap at 1:17.405 put the team in sixth place in the Prototype Class, competing at Long Beach alongside the GTLM category in Saturday’s main event.

Long Beach, Calif. – The Claro/TracFone DeltaWing Racing Cars team began the day with a long list of unknowns in its TUDOR United SportsCar Championship street circuit debut. At the end of the day, the team put its new-found knowledge to good use with a sixth-place starting position in tomorrow’s Tequila Patrón Sports Car Showcase at Long Beach.

The DeltaWing Coupe’s first day amidst the concrete canyons saw the team work through setup changes designed to maximize the car’s ability to handle the myriad of bumps throughout the historic street circuit. With only two hours of practice time early Friday morning, the team returned to the track at the end of the day for 35 minutes of additional practice ahead of the qualifying session.

It’s our first street course, so we weren’t sure what to expect.

Drivers Katherine Legge and Memo Rojas, working with new race engineer Catherine Crawford, found a balance that helped Rojas set the team’s quick lap of the day toward the end of the 20-minute qualifying session. The lap at 1:17.405 put the team in sixth place in the Prototype Class, competing at Long Beach alongside the GTLM category in Saturday’s main event.

Coming on the heels of the two longest races of the year (a combined 36 hours), the Tequila Patrón Sports Car Showcase is an outright sprint event; at 100 minutes, it is the shortest race of the season. Drivers count on both luck and skill to maneuver around the 11-turn, 1.968-mile circuit surrounded by walls, grandstands – and one of the largest spectator crowds of the year. The race will be broadcast live on IMSA.com from 7:05 – 8:45 p.m. ET, with a replay on FOX Sports 1 Sunday, April 19 at 4:00 p.m.

Memo Rojas: “We made good progress today, getting the car to handle the bumps. Long Beach is one of the bumpiest tracks we go to and we’re certainly still learning how to manage that. We improved all day and need to continue doing that. The DeltaWing is a different car in so many ways from the car I drove here last year – in a good way. It’s more efficient, it brakes really well. The car is consistent, we’ll work on more performance for tomorrow’s race.”

Katherine Legge: “It’s our first street course, so we weren’t sure what to expect. We made a lot of changes today; some worked, some didn’t. I know everyone says it’s a learning experience, but for us, it really is. We’re making strides in each session. Memo did a great job in qualifying so hopefully we’ll stay out of trouble in the race and get a good result. But it’s great for me to be back at Long Beach, I’ve been here so many times but this is the first time in closed-cockpit car. It’s a different perspective.”

Team Manager Tim Keene: “The bottom line is that we didn’t know what to expect here; we came in with a clean sheet. The bumps are affecting us here – not as bad as Sebring, but enough to affect the car. Memo did well in qualifying, putting down the fastest lap the car did all day. Katherine did a great job, coming up with some things to develop. We know we can make it better, all we need is time. We’re competing against teams who have been here many times and this is our first time. We’ll make it better for the race and if we can stay out of trouble tomorrow, I think we can improve."