Veterans set for 'back to the future' experience.

Sports car racing veterans will have a "back to the future" experience when the 2014 TUDOR United SportsCar Championship opens with the Rolex 24 At Daytona followed by the 62nd Annual Mobil 1 Twelve Hours of Sebring fueled by Fresh From Florida.

The informal "36 Hours of Florida" was a staple of the original IMSA GT Series, dating back to 1975. 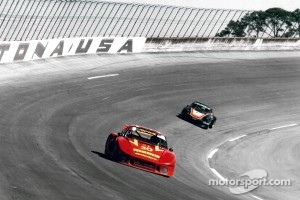 "It was a big deal to race at Daytona and Sebring, because both races were truly international events," said Bobby Rahal, winner at Daytona in 1981 and Sebring in 1987. "They were really the crown jewels of endurance racing in this country – and were both highly regarded internationally. Winning those races carried not quite the cachet of Le Mans, but they were pretty darn close. You really sought to win those two races, and if you were successful, it was something you point to on your CV – as I do.

"The Rolex 24 was my first big win from an international standpoint," Rahal continued. "Daytona was a real big deal. But winning at Sebring was even more emotional for me, because I had gone there with my father when he raced there, and it was the oldest endurance race in the country. The greatest drivers in the world had run in those two events, and to compete – and win – was a pretty big deal. It was a great deal to be on the same roadway where the greats like Dan Gurney, Brian Redman, Jo Siffert raced – the list goes on and on."

While both races have continued on an annual basis, the last time the two classics ran under unified sanction was in 1997.

In 1998, Professional Sports Car Racing sanctioned Sebring, while the USRRC held the Rolex 24. The American Le Mans Series presented by Tequila Patrón debuted at Sebring in 1999, while the GRAND-AM Rolex Sports Car began with the 2000 Rolex 24.

"Having Daytona and Sebring back together is pretty phenomenal," said team owner Kevin Doran. "I remember the Sebring race was just as – if not more – grueling than the Rolex 24. It was a pretty daunting task back in the day to have those classic races coming first and second on the schedule. Instead of the 36 Hours of Florida, it felt like the 48 hours of Florida."

Doran returns to both races in 2014, fielding a DP for Fifty Plus Racing.

Meyer Shank Racing Acura won the final IMSA WeatherTech SportsCar Championship race of the DPi era, and claimed the 2022 championship after the Ganassi Cadillacs collided and the WTR Acura hit a GT car.

Wayne Taylor Racing is in the perfect spot to win Petit Le Mans and the 2022 IMSA WeatherTech SportsCar Championship, but there is still half of the race to go at Michelin Raceway Road Atlanta.

Sebastien Bourdais is leading the IMSA WeatherTech SportsCar Championship field in the season finale at Michelin Raceway Road Atlanta, as the Acura teams sit second and third, dueling for the Prototype title.