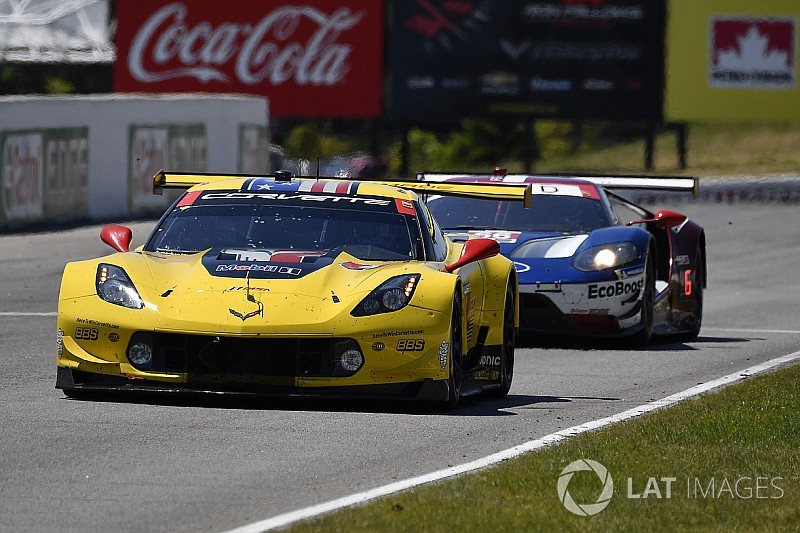 So the IMSA Championship is really hotting up now and Corvette Racing, Antonio Garcia and I are right in the hunt.

We’re only six points off the lead with five races to go. Anything can happen and we certainly have our sights set on trying to defend our title from last season.

I said it all last year and I think this one is going to be the same – the 2018 championship is going to go right down to the wire, to the final laps at Petit Le Mans.

Canadian Tire Motorsport Park was another great race for us. Through every session we were right in the hunt in the top three. The car felt really strong in qualifying and then I made a great start and settled into second place.

Both of us really love that track and I’ve had amazing runs at Mosport over the years. Luck certainly has the potential to play a key role in the championship. With a bit of luck, we could have actually pulled off the win – but we also had a bit of luck with traffic too.

One of the Porsches got held up a little heading onto the back straight. Both Corvettes were there ready to pounce and a two-car bright yellow freight train was able to charge on past.

However, the late race yellow was bad luck for us, and good luck for Richard Westbrook and Ryan Briscoe at Ford. That yellow fell perfectly for them, and allowed them to come back out in the lead. Had that not happened when it did, we might have been able to get to Victory Lane.

Consistency was really the key to our championship last year. We were able to finish every race inside the top five. It could have been even better because that single fifth place finish was at Long Beach, where we actually had the lead until that final corner when the track was blocked.

We’ve had one rough race at Sebring with an eighth place finish but apart from that, our season has been really strong. Four podiums in six races including three in a row has been the key for us.

To really bridge that gap to first place, a win or two would be handy but it all depends on how your opposition performs. We’re just going to keep pushing and pushing as hard as we can and making sure we are there at the finish and knocking on the door.

In the past two races we’ve jumped from fifth to second in the points. Things are so tight so we just have to keep that momentum rolling.

Keeping an eye on Kevin

Things have certainly been going pretty well for the Magnussen family – both for me and Kevin. He picked up more points at Silverstone in pretty trying circumstances.

Contact in the first corner is never great – especially when it is your teammate. There was a lot going on down there, and the good thing for Kevin is that he was able to escape without too much damage.
The car was certainly a little compromised but he just kept pushing hard and fighting all the way to the finish.

Germany is next up on his schedule and I’ll be keeping an eye on things while racing in Lime Rock this weekend.