Consistency paying off for BMW 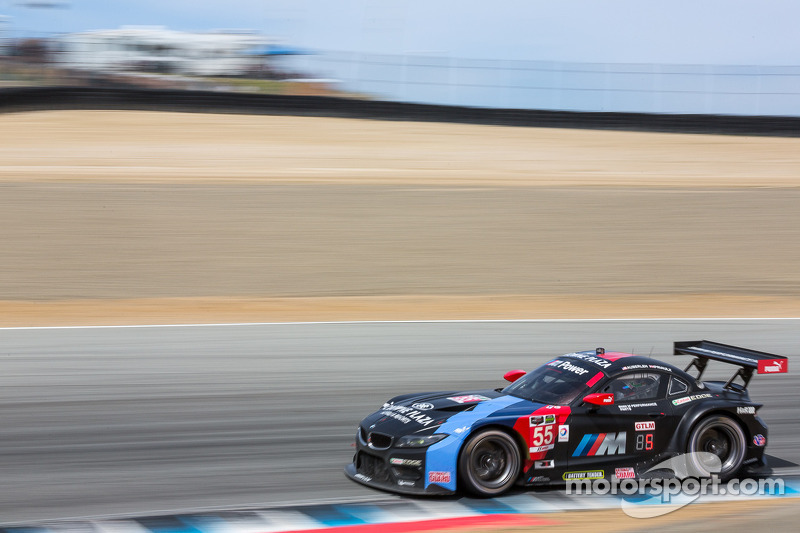 German brand on top in points, but there's a lot of racing left

That’s where BMW finds itself in the GT Le Mans (GTLM) class standings of the TUDOR United SportsCar Championship. BMW is the sole manufacturer with four consecutive podiums, the obvious key to BMW Team RLL leading both the team and driver points.

The consistency of the team’s two driver tandems – Bill Auberlen-Andy Priaulx (shown above) and John Edwards-Dirk Mueller – also has kept BMW in the thick of the GTLM manufacturer championship. Porsche currently leads BMW by two points (128-126), with Chevrolet another two points back.

Auberlen and Priaulx lead the driver standings, while their No. 55 BMW Z4 GTE entry leads the team standings.

“Consistency is our focus, and I’ve been preaching that to the guys all year,” said Gordon McDonnell, BMW NA motorsports manager. “It’s not always about winning, it’s about [passing] the position in front of you. This is our sophomore year with the car, and it is certainly more developed. Also I feel we have some of the best pairs of driver combinations out there.”

BMW also has been strong in GT Daytona (GTD) competition. Dane Cameron won the pole and set the fastest race lap at Sebring, and then joined Markus Palttala in winning at Mazda Raceway Laguna Seca in the No. 94 Turner Motorsport BMW Z4 GT3. It was the first victory in North America for the Z4 GT3, in only its third IMSA race. Due mainly to a DNF in the Rolex 24, Cameron and Palttala are 10th in the standings. BMW is fourth in the GTD manufacturer standings with 91 points, only four behind leaders Ferrari and Porsche (95) and three behind Audi (94).

The solid start for BMW teams carries over to the Continental Tire SportsCar Challenge, where BMWs have won in both the Grand Sport (GS) and Street Tuner (ST) classes.

Edwards and Trent Hindman won at Mazda Raceway Laguna Seca to take the Grand Sport (GS) points lead in the No. 46 Fall-Line Motorsports BMW M3. Hindman also captured poles at Sebring and Mazda Raceway, joining Edwards in three podium finishes in three races. Teammates Shelby Blackstock and Ashley Freiberg won at Daytona in the No. 48 Fall-Line Motorsports BMW M3 and are third in the standings.

In Street Tuner (ST), Eric Foss and Jeff Mosing won at Daytona in the No. 56 Murillo Racing/Mosing Motorcars BMW 328i, while defending ST champions Terry Borcheller and Mike LaMarra are fourth in the points driving the No. 23 Burton Racing BMW 128i.

BMW holds a seven-point lead over Chevrolet (102-95) in the GS manufacturer points, and trails Mazda by one point (100-99) in the ST standings.