Corvette DP’s finished 1-2-3-4 Sunday in the 52nd Rolex 24 at Daytona, the opening round of the new Tudor United SportsCar Championship.

The No. 5 Action Express car shared by Joao Barbosa, Christian Fittipaldi, and Sebastien Bourdais took the win, with Barbosa crossing the finish line 1.461 seconds ahead of Wayne Taylor Racing’s Max Angelelli. Barbosa out-raced Angelelli to the checkered flag after the race’s final restart, which came about eight minutes from the end, to seal the victory.

“I saw there was a car between me and Max and it was quite a good opportunity (for me),” Barbosa explained in reference to the restart. “I thought I might have advantage there and I took it. I was able to build enough of a cushion to (secure the win).”

“It’s one of these big races that you want to put on your resume,” added Bourdais. “I’ve been chasing Le Mans many times to get a Rolex and that didn’t work out, so I came here.” 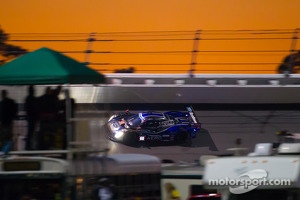 Angelelli tried to get around the car that lay between him from Barbosa, but could not do so in enough time to reach Barbosa. “I tried everything,” explained Angelelli. “I tried to settle the car and find a good balance and get a good run. I thought I had an opportunity . . . but did not have enough for (Barbosa).”

Klaus Graf, Lucas Luhr, and Alex Brundle in the Greg Pickett Racing Oreca 03 Nissan ended up fifth (three laps down), making it the highest finishing of the former American Le Mans Series P2 cars in the race. The other legacy P2 cars did not fare well in the race. The next best P2 car (the Morgan Nissan) finished 17 laps behind the winners.

There was a lot of talk before the race about the complicated rules the series has implemented in an attempt to balance the performance of the different cars and engines that inhabit the prototype class and how those rules might affect the race. The Corvette DPs seemed to have more top-end speed than the Ford and Nissan-powered prototype cars, which could not keep up with the Corvettes on the long straightaways and the high-banked turns surrounding the infield road course at Daytona.

The Ford-powered Ganassi Rileys were able to keep pace with the Corvette DPs by pushing hard in the infield road course section of the track, but neither car managed to finish. The No. 02 Ganassi car was running fourth with about 30 minutes remaining, but retired a short time later due to irreparable damage to the car’s floor.

Engine problems necessitated the retirement of the No. 01 Ganassi Ford Riley about 90 minutes from the end of the race. This car was 33 laps down before the engine problems struck, having spent a long time in the garage early Sunday morning so the team could repair front-end crash damage caused by contact with a GT car in the chicane on the backside of the track.

Series officials will more than likely make some changes to the rules prior to the next race at Sebring, which is more of a handling-oriented track than Daytona. Indeed, some competitors think the series will make changes to the rules before just about every race this year. These potential and ongoing changes are viewed as just part of the teething process for the new series, which features some cars that had not previously competed against one another.

Colin Braun, Mark Wilkins, James Gue, and Jon Bennett took the win in Prototype Challenge, which features identical Chevrolet-powered Oreca FLM09 cars. They finished one lap ahead of the No. 25 8-Star Motorsport entry. The No. 38 Performance Tech Racing car rounded out the class podium, nine laps behind the class winners.

“I am just really excited,” explained Braun. “We worked really, really hard to come up with a plan we wanted to stick with. And we just came prepared this weekend and executed our plan.”

The team was the fastest in class in both pre-race practices and qualifying.