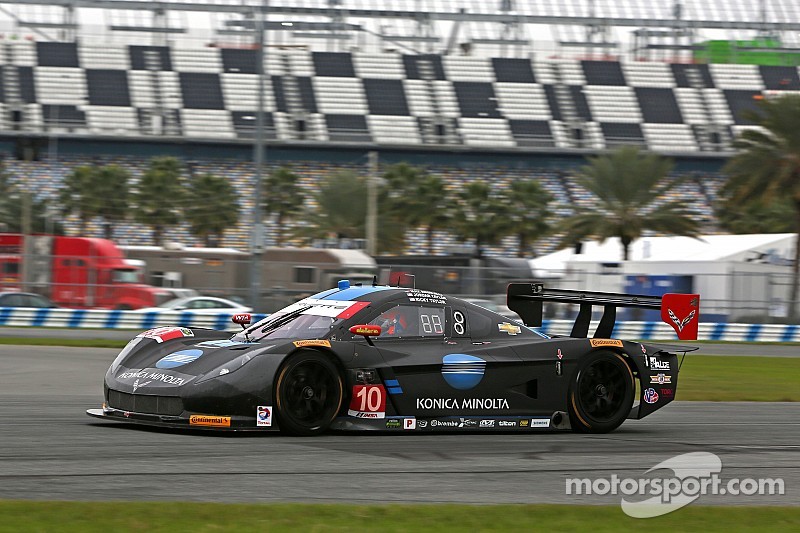 DAYTONA BEACH, Fla. – Living up to its billing as a dress rehearsal for the 53rd Rolex 24 At Daytona, Saturday’s second day of the Roar Before the Rolex 24 featured four sessions of TUDOR United SportsCar Championship practice, including a special 90-minute nighttime session.

Jordan Taylor ran the fastest lap of the day, going 1:39.181 (129.218 mph) in Wayne Taylor Racing’s No. 10 Konica Minolta Corvette DP shared by his brother Ricky Taylor and Max Angelelli. The three-day test wraps up with a pair of Sunday practice sessions beginning at 10:20 a.m. ET.

“These days you need to have the fastest car because when you get to the final hour [of the race] you need to race everyone,” said Taylor. “Five years ago we wouldn’t focus on a lap-time car; we’d just make it as comfortable as possible. Now you need to work on lap times and race pace because you know you’re going to come to that last hour having to race for the win.”

• Porsche Motorsport North America is celebrating Alex Job Racing’s first 25 years in sports car racing this weekend. “From his experience in the automotive retail business to his success as a driver and mechanic, Alex has all the tools to run a productive motorsports operation, and his championships over the 25 years of Alex Job Racing have proven he can put that rubber to the road,” said Porsche Motorsport North America president and CEO Jens Walther. “And we’re proud that he has chosen Porsche as his preferred marque.”

• The No. 0 DeltaWing Racing Cars with Claro/TracFone DWC-13 team was forced back to its race shop in Braselton, Georgia after an incident in Saturday’s afternoon session. The prototype sustained damage after another car hit the wall on the front straight just ahead of driver Memo Rojas. The team was working through the resulting differences in downforce when Rojas lost control in the kink and tapped the wall. The team decided the damage was too significant to repair at the track.

• Byron DeFoor escaped injury when he flipped the No. 50 Fifty Plus Racing Endures for a Cure Dinan/Riley after encountering a mechanical problem entering Turn 1 in the morning session. Other drivers evaluated and released from the infield care center after on-track incidents were Francois Perrodo, driver of the No. 51 AF Corse Ferrari F458 Italia and Jerome Mee, driver of the No. 38 Performance Tech Motorsports ORECA FLM09.

John Doonan, Director of Motorsports at Mazda Motorsports: “In short, what we’re doing is telling a story, and if you roll the story back to chapter one, which was one year ago, on this particular weekend, there weren’t very many smiling faces around this program. But yesterday as I sat on the west coast in meetings, trying to watch live timing when I could, words like ‘remarkable’, words like ‘miracle’, looking in the eyes of our crew members and seeing what they’ve done to bring us to where we are today. We’re talking about 20 mph straight-line gains, we’re talking about six to seven seconds of lap time at this particular track which isn’t particularly a place that allows us to show the strength of this engine in a straight line. From a storytelling standpoint, we’re doing exactly what we set out to do.”

Tim Keene, Team Manager - The No. 0 DeltaWing Racing Cars with Claro/TracFone DWC-13: “We had some damage from that incident this morning that affected the underfloor, and that had a negative effect on the balance of the car. But overall, everything was good. It was unfortunate at the end, but we got a lot of good data and we’re confident in that area. We have a good package – we’re quicker than we’ve ever been here.”

AJ Allmendinger, Driver - No. 60 Michael Shank Racing with Curb/Agajanian Ligier JS P2/Honda: “This is the type of racecar that throughout the last 10, 11 years of car racing I’ve done, I’ve always wanted to try driving. So when Mike [Shank] and I were talking and he said he was going to make this move, for me, I was pumped up to do it just for the pure excitement of trying to drive one of these cars.”

Earl Bamber, Driver - No. 912 Porsche North America Porsche 911 RSR: “Last year – the first year of Porsche North America returning to America with CORE autosport – it set a very high standard winning Daytona and Sebring, winning the [Tequila Patrón] North American Endurance Cup and the manufacturer championship. Those were quite a few boxes ticked last year so we have a bit to do to try and better what we did last year.”

Marc Goossens, Driver - No. 33 TI Automotive/ViperExchange.com Dodge Viper GT3-R, defending Rolex 24 GTLM pole winner: “I’ve always liked Daytona, but there are a lot of good drivers out there and a lot of people working hard right now to come back here in two weeks and get the pole. Hopefully we have something for them, but most importantly we need to be there at the end of the race and try to get that watch.”

Jon Fogarty, Driver - No. 2 Tequila Patrón ESM HPD ARX-04b/Honda: “I’m super-excited about this opportunity and the car is great to drive. It’s comfortable, it’s quiet, there are a lot of things to like about it, but it’s still an evolving process getting used to it. I have driven a lot of different cars so it wasn’t totally foreign to me.”