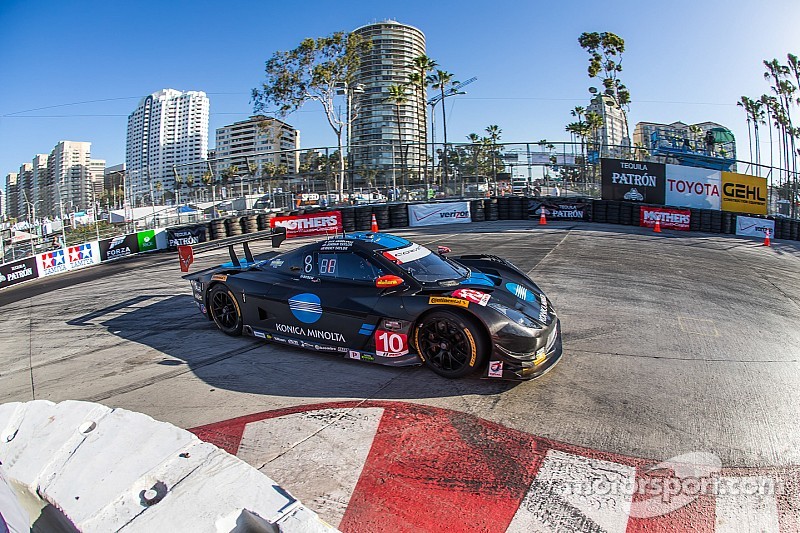 Up next is qualifying for the TUDOR United SportsCar teams at Long Beach.

The Corvette DP teams go into qualifying tonight as the favorites to take the overall pole as they led all challengers in today's practice sessions, preceding qualifying.

The No. 31 Whelen Corvette led the way in the longer, earlier session with a time of 1:16.063 seconds, put down by Dane Cameron. A Corvette DP quartet held the top four times with the VisitFlorida.com No. 90 second and the sister Action Express No. 5 in third. Taylor and Ganassi followed with the entire top five split by less than half a second.

Michael Shank Racing, trying to forget about the undesirable way their Sebring race ended, lost time after colliding with a GTLM car and Ozz Negri spinning the Ligier JS P2 as a result.

The SpeedSource No. 07 Mazda ended up nose-first into the barriers, but dislodged itself and only caused a minor delay.

Giancarlo Fisichella put the Risi Competizione Ferrari 458 at the top of the charts in GTLM at a 1:18.725. The BMW Z4s were the best of the rest, timing in second and third but not close enough to put that 1:18.7 of Fisichella to the test.

Then a short, 35 minute practice came immediately prior to qualifying and ended with back-to-back incidents. Oliver Gavin spun his No. 4 Corvette, but escaped major damage. As the checkered flag flew, the Risi Ferrari that led the earlier session suffered left front and rear-end damage after pushing a little too hard at the end of practice.

At the top of the charts sat Wayne Taylor Racing at a 1:15.879, courtesy of Ricky Taylor, almost six full tenths clear of Ganssi's No. 01 Ford Riley. Eric Curran put the session one-leading No. 31 Action Express Corvette up in third, ahead of the VisitFlorida.com No. 90 Corvette and No. 60 Michael Shank Racing Ligier.

Bill Auberlen was the fastest man in GTLM with a lap of 1:17.714 seconds. The Risi Ferrari was second with Fisichella, splitting the sister BMWs.