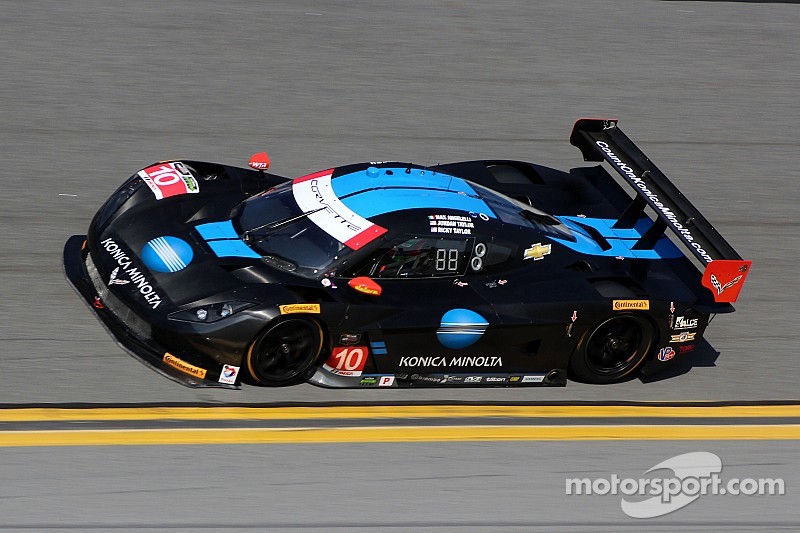 DAYTONA BEACH, Fla. (Jan. 10, 2015) – Jordan Taylor set Saturday’s fastest time at Daytona International Speedway in the No. 10 Corvette DP for Wayne Taylor Racing. Taylor – driving with brother Ricky alongside Max Angelelli – posted a lap of 1:39.181 (129.218 mph) in Saturday’s first session during the second of the annual three-day test ahead of the Rolex 24 At Daytona in two weeks.

The Taylors, Angelelli and team owner Wayne Taylor were runners-up in last year’s Rolex 24, the first race of the TUDOR United SportsCar Championship. Action Express Racing’s Sebastien Bourdais was second overall in the team’s No. 5 Corvette DP at 1:39.310 (129.050 mph) in night practice. He, Christian Fittipaldi and Joao Barbosa won the Rolex 24 in 2014, a victory that helped propel Fittipaldi and Barbosa to the TUDOR Championship’s Prototype Driver’s title.

In GTLM, Corvette Racing’s Jan Magnussen was third-fastest in the No. 3 Chevrolet Corvette C7.R with a lap of 1:44.500 (122.641 mph). For the second year in a row, he is sharing the No. 3 Corvette with Antonio Garcia – a year after the duo won four TUDOR Championship races – and Ryan Briscoe. Tommy Milner, driving the No. 4 Corvette C7.R with Oliver Gavin and Simon Pagenaud, set the car’s best time of 1:44.799 (122.291 mph), in the last of Saturday’s four sessions. Milner’s time was good for sixth best in GTLM on the day.

How Have Things Gone So Far? You Laid Down A Fast Time This Morning. Are You Encouraged By How Things Have Gone?

"I think so. Yesterday we did a lot of work that wasn't going to show lap time, but it was things we needed to get through. Today we could actually work on the car on set-up things. We have always had a pretty good car at Daytona. We were quick this morning which was nice to see over one lap. From there we have been working on long run stuff for 24 hours. We never go for a qualifying car here, but we are trying to make it as comfortable as possible. We have been doing aero stuff, mechanical stuff trying to get in a window where all three of us are comfortable. Thankfully we have all been together we all know each other so it doesn't matter who is testing it each session. I certainly think it is going in the right direction."

Do you feel more has been accomplished this year than last?

“We’ve been able to get a lot more work done on setup this time around. Last year was a matter of getting to know the Corvette C7.R and trying to sort some of the ‘new’ issues. It’s been much nicer and much more productive this year. We’re in a pretty good position but we won’t know until race time where we stack up against anybody else. We got through our program and tested the elements we had planned. In that respected, we’re much better prepared than we were last year.”

“So far so good. It’s been a real pleasure to join the Corvette Racing team, and it’s great to be part of the Team Chevy family. The Corvette C7.R is a beautiful car - really a super-cool race car. It’s very close to what I feel in a single-seater. I’m having to get used to the brakes and how it feels with the weight compared to an IndyCar. The engine is really nice. There are always some things I can polish on my driving, which is what I’m doing. It’s enjoyable. I’m having a great time in my first laps for 2015.”

How is it managing traffic and using the Collision Avoidance System?

“It’s a great invention. What a beautiful piece of electronics! You can see pretty much everything behind you. The arrow indicates when someone is passing you when you can’t even see the car in the camera. It’s really well done. So I’m getting used to that and all the other instruments and buttons in the car. So far so good.”