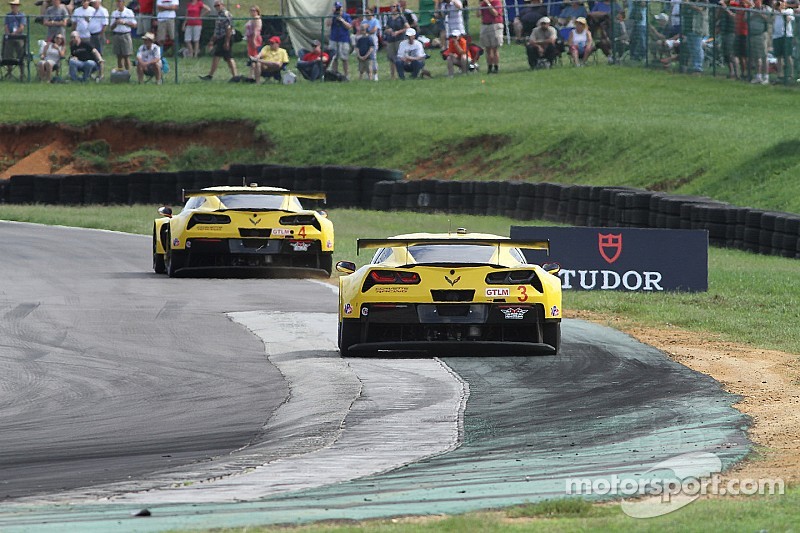 Oliver Gavin and Tommy Milner in the No. 4 Corvette C7.R were ninth in Sunday’s race after Milner was forced off track midway through the race and lost four laps. Two races remain in the inaugural TUDOR Championship season. Corvette Racing has four class victories on the season – the most of any team in GTLM.

Gavin and Milner looked to be the stronger of the two Corvette Racing entries in the race’s first half.  Gavin opened with a strong stint that saw the Brit move from ninth at the start to fifth by the time he handed off to Milner. The American was battling with the eventual race-winning Ferrari just prior to the halfway point when he was hit hard from behind by another GTLM competitor.

The impact pushed Milner far off the track and heavily damaged the left-front of the Corvette C7.R and ended their podium challenge. The Gavin/Milner duo hoped to replicate their 2012 American Le Mans Series class victory at VIR.

Taylor started the No. 3 Corvette C7.R in place of Jan Magnussen, Garcia’s regular teammate. As a precaution following a crash involving Magnussen in Saturday’s practice session, the Dane and Chevrolet Racing management agreed he would not race.

Sunday morning’s warmup marked the first laps in the Corvette C7.R around VIR for Taylor, who drives for Corvette Racing at the 24 Hours of Le Mans. He drove a measured stint following a careful start and was second when he pitted at the 53-minute mark to hand off to Garcia.

The Spaniard drove a solid double-stint and led with 50 minutes left when he made his final stop for fuel and tires. Try as he might, Garcia was unable to advance from seventh place. The result meant that Chevrolet fell out of the lead in the GTLM manufacturer championship.

The next TUDOR Championship race for Corvette Racing is the Lone Star Le Mans on Saturday, Sept. 20 from Circuit of The Americas in Austin, Texas. The team also will field a Corvette C7.R in the FIA World Endurance Championship’s six-hour race on the same day.