Corvette Racing wins 53rd Rolex 24 by less than one second 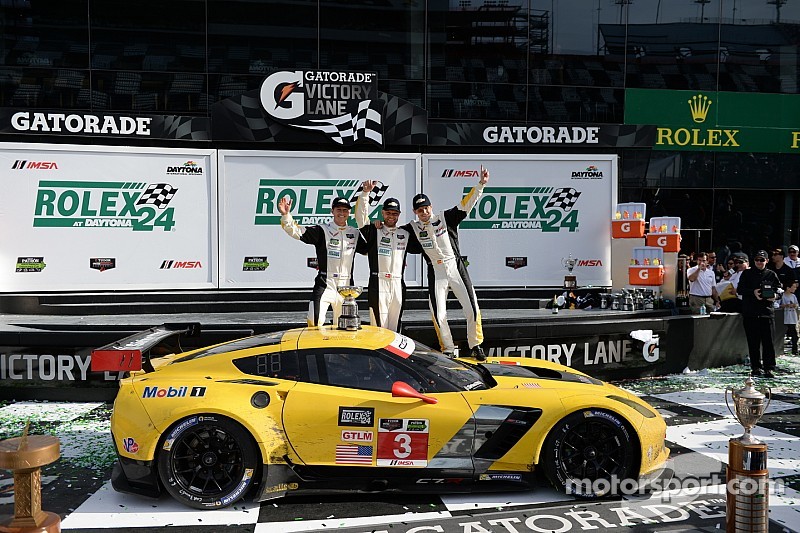 DAYTONA BEACH, Fla. – A 24-hour race came down to a seven-and-a-half minute sprint to the checkered flag in the 53rd Rolex 24 At Daytona with the No. 3 Corvette Racing Chevrolet Corvette C7.R beating the No. 25 BMW Z4 GTE from BMW Team RLL to the stripe by a mere 0.478 seconds. The GT Le Mans (GTLM) class win was Corvette Racing’s first class victory at the Rolex 24 since 2001.

It was a Corvette vs. BMW battle for much of the final quarter of the race with Antonio Garcia holding a comfortable lead in his Corvette over Dirk Werner’s BMW with 20 minutes remaining. That lead quickly evaporated, however, when Prototype Challenge (PC) class leader Colin Braun made contact with the wall coming out of the chicane on the backstretch forcing a full-course caution period. Werner closed the gap throughout the final six laps, but fell just short at the checkered flag with Garcia joining co-drivers Jan Magnussen and Ryan Briscoe in the victory.

“Every time you win here it's very, very special,” Garcia said. “I've been chasing this victory since 2009, even if I won it back then. This is a very unique race. It’s the first race of the year, so it's very difficult to be at 100 percent right away for the team and for the drivers. Everything ran perfect, and as Ryan (Briscoe) said, we just kept our nose clean, and I had the best car to fight on the last eight minutes of the race.”

Garcia won the Rolex 24 overall in 2009 for Brumos Racing. Corvette Racing did not compete at Daytona from 2002 through 2013 before joining the TUDOR United SportsCar Championship for its inaugural 2014 season.

The No. 4 Corvette Racing Corvette C7.R entry of Tommy Milner, Oliver Gavin and Simon Pagenaud was in contention for the race win, but lost four laps after making contact with the No. 66 RG Racing BMW Dinan/Riley Prototype with three hours remaining and finished third.

The No. 93 TI Automotive/ViperExchange.com Dodge Viper SRT GT3-R and drivers Ben Keating, Al Carter, Dominik Farnbacher, Kuno Wittmer and Cameron Lawrence had the field covered for much of the Rolex 24 in the GT Daytona (GTD) class. They found a challenge from the No. 22 WeatherTech Racing Porsche 911 GT America of Cooper MacNeil, Leh Keen, Andrew Davis and Shane van Gisbergen -- the two cars combined to lead the final 209 laps of the race -- but Farnbacher led the last 49 circuits en route to a 7.588 second victory.

“For everybody in the room and the fans and everybody, we're not just weekend warriors that are weekend hires,” Wittmer said. “We're family; we're more than that. We've worked together since 2012, and some of us before that. Yeah, unfortunately our program got pulled, but I think it's the cooperation of Ben Keating and Bill Riley and some others that were able to retain us family, keep us together and get it going.”

• The Rolex 24 At Daytona also was the opening round of the four-race Tequila Patrón North American Endurance Cup. Points were awarded at the six, 12 and 18 hour marks in addition to the finish. Both class winners also won the opening round of the Patrón Endurance Cup with the No. 3 Corvette Racing team scoring 18 points by winning two segments, and placing second in the other two. The No. 93 Riley Motorsports team led three segments in GTD en route to scoring 19 points. Five points are awarded for the winner in each segment, with four points for second, three points for third and two points for fourth on back.

• A number of GTLM contenders ran into issues in the middle part of the race. Leading into the 10th hour in the GTLM class, Pierre Kaffer pitted the No. 62 Risi Competizione Ferrari F458 Italia with a loss of horsepower. After multiple pit stops to diagnose the issue, Kaffer drove to the garage for repairs and the team later retired from the race after reporting an electrical misfire. Defending race winners Porsche North America were involved in a multi-car incident that took both of its Porsche 911 RSRS out of contention in the 11th hour of the race. Nearing the 18-hour mark Team Falken Tire’s Porsche 911 RSR was running in the top-three, but went behind the wall with a drivetrain issue.

• It was worst to first for the No. 93 TI Automotive/ViperExchange.com Dodge Viper SRT GT3-R team. The team chose to change tires following qualifying and was moved to the back of the GTLM/GTD grid, starting last in the 53-car field. The team first took the lead at Lap 223.

• In one of the race’s stranger moments, the No. 44 Magnus Racing Porsche 911 GT America of Andy Lally went to the paddock with what was diagnosed as an oil leak. Upon further inspection, however, the team realized it had struck a possum that broke the splitter and tub and into the front of the car.

Ryan Briscoe, Driver - No. 3 Corvette Racing Corvette C7.R: “I've been coming here since 2005, so yeah, I wasn't a big fan of this place until now. It's just such a tough race. Jan and I were talking about it before we came in, for both of us it's the first time we've ever done the race without going back to the garage. … I think the key was keeping our nose clean, having a fast race car at the end of the day.”

Antonio Garcia, Driver - No. 3 Corvette Racing Corvette C7.R: “You couldn't see a better lineup overall for all the manufacturers here. Since lap 1 all the way to the last lap, we showed that GTLM is very competitive and teams are extremely competitive, too, and you can't afford to do any single mistake. I’m very proud that I was in the right car, and we just did what we had to do – drive a perfect car.”

Cameron Lawrence, Driver - No. 93 TI Automotive/ViperExchange.com Dodge Viper SRT GT3-R: “I don't think it's sunk in yet. Like Dom (Farnbacher) said, we're all very emotional. This is something for me I never thought would happen, at least this soon. First time, I just don't have any words for it to explain it correctly. I've just got to thank all the guys, the crew, Bill, all the guys that made this happen, and to let me win with this group of drivers and these guys is unbelievable.”

Patrick Dempsey, Driver – No. 58 Brumos Porsche 911 GT America: “The tremendous support Porsche has given me has allowed this to happen. With Brumos, and their history here, it is such a satisfying experience and we want to thank them for their belief in me and thank them for giving me this opportunity. It means a lot, as there is a real family feeling about it. There is a beauty in this company that is awe inspiring.”