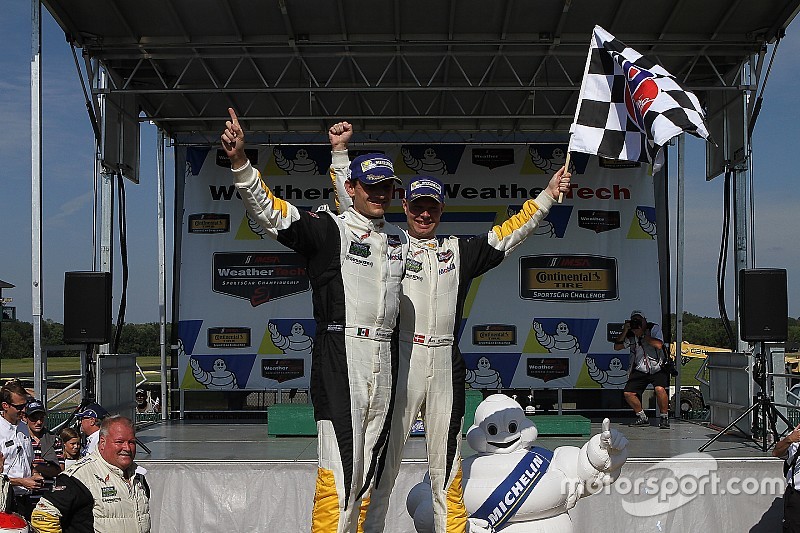 Jan Magnussen and Antonio Garcia kept the No. 3 Corvette Racing Corvette C7.R up front throughout most of Sunday’s Michelin GT Challenge at VIRginia International Raceway.

It came down to one-lap sprint to the checkered flag, but they were able to hang on and win their first IMSA WeatherTech SportsCar Championship race of the season.

After watching their team cars combine to win seven of eight races in the GT Le Mans (GTLM) this season the No. 3 Corvette and Ford Chip Ganassi Racing’s No. 66 Ford GT co-driven by Joey Hand and Dirk Mueller battled up front throughout the lone WeatherTech Championship race of the season reserved for the GTLM and GT Daytona classes.

Magnussen led the opening 28 laps after starting from the pole. Garcia then paced 56 laps, including the final 27, with the lead Corvette only relinquishing the lead for six laps during pit stops. The race was slowed by only one full-course caution for a late incident involving Oliver Gavin in the championship-leading No. 4 Corvette C7.R. On the restart, Garcia was able to pull away in a one-lap sprint to beat Mueller to the checkered flag by 0.802 seconds.

“It was a very hard race,” Garcia said. “My team got me a three- to four-second gap, and then it was a classic green and white/checkered. It was an amazing race and the Corvette was brilliant. It really paid off to be out testing on Monday and Tuesday (at Road Atlanta), because the car was fantastic.”

Hand qualified third, but took second place on the opening lap, with the Ford GT shadowing the winning Corvette for virtually the entire 90-lap race. Mueller and Hand are still seeking their initial GTLM victory of the season, but they won their class in the 24 Hours of Le Mans in June.

“The team did once again a tremendous job in the pit; we had to really rush it at my driver change, but it all went well,” Mueller said.  “Then, it was about 1 hour, 50 minutes of me with the Corvette – running one qualifying lap after another. Basically, the only decider was traffic. I got caught in traffic and soon the gap was just too big. I increased the pressure at the end. My Ford GT was running like a rocket ship today, and the Michelin tires were holding on. It was a 100-percent run today.”

“Definitely not our day – I guess some of the racing luck we’ve had balances out,” said Milner. “These are the kind of days that you want to prevent. But I’m really happy for our teammates – the manufacturer championship is number one for us at Corvette Racing. When we falter, they pick up the slack, and they did a fantastic job today. Well deserved, for sure.”

Giancarlo Fisichella was nearly in position to repeat his thrilling last-lap victory for Risi Competizione from 2014 at VIR. Running third on the final restart, Fisichella spun in the No. 62 Ferrari 488 GTE co-driven by Toni Vilander after contact in Turn 1. As a result, Earl Bamber took third in the No. 912 Porsche 911 RSR started by Frederic Makowiecki, while the Ferrari finished seventh.

One day after Snow captured his first TOTAL Pole Award in WeatherTech Championship competition, he and Sellers teamed up to lead virtually every lap to win the GT Daytona (GTD) class in the two-hour, 40-minute race around the 3.27-mile road circuit. The team only surrendered the lead for a total of five laps, during both of the race’s pit-stop cycles.

Sellers got away clean on a restart for a one-lap dash to the checkered flag following the race’s only full-course caution period and beat Lawson Aschenbach in the No. 9 Stevenson Automotive Group Audi R8 LMS to the stripe by 1.471 seconds to secure the victory. It was Sellers’ seventh victory in major U.S. sports car competition, with four previous victories in the American Le Mans Series and three in the WeatherTech Championship. It was his first in the GTD class.

"I was lucky to be the one to bring the car home today, but I think the majority of the credit should go to Madison,” Sellers said. “He was fantastic all weekend. We gave him an agenda in the opening drive, which took a while trying to get a gap, and he handed me the car with a 20-second lead. So, my whole goal was to maintain the game and at the same time saving fuel. So to him go all congratulations. When you are growing up as a kid and dream of driving Lamborghinis, and then get the first major win in the U.S. in a premier series, it’s a great honor."

"We were pretty strong all weekend,” Snow said. “The pressure (to perform) kept getting more and more as the weekend went on. Obviously, we kept pressing harder and harder as the week went on to stay on top. For qualifying, we had the car set up perfectly; there's nothing more I can say about that. It was exactly the way I wanted it the whole way around.”

Andy Lally and John Potter crossed the finish line third in the No. 44 Magnus Racing Audi R8 LMS, but were excluded from the final race results when a minimum ride height infraction was discovered in post-race technical inspection.

As a result, Robin Liddell and Andrew Davis made it two Stevenson Motorsports Audis in the top three with a third-place result in the No. 6 Stevenson Automotive Group R8.