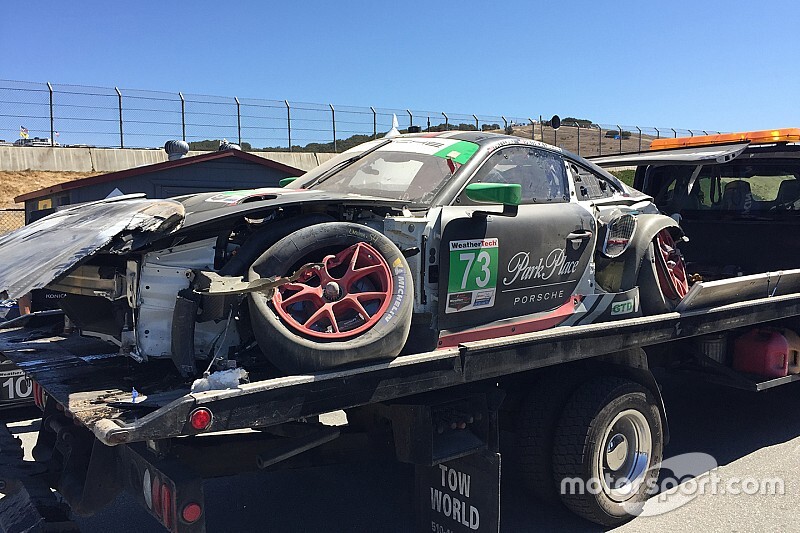 A shunt at Laguna Seca in qualifying for the penultimate round of the IMSA WeatherTech SportsCar Championship has led to Park Place Motorsports pulling out of the season finale at Road Atlanta.

Patrick Lindsey had a nasty-looking shunt in the PPM Porsche 911 GT3 R exiting Turn 10 at WeatherTech Raceway Laguna Seca two-and-a-half weeks ago, and the team has been unable to purchase a replacement.

A press release stated that “the challenges of repairing the racecar amongst other commitments also brought Park Place Motorsport few economical options.”

Among those commitments are Alan Brynjolfsson and Trent Hindman campaigning in IMSA’s GS class in the Porsche Cayman GT4 competing for second place in the championship. Brynjolfsson is also currently leading the Porsche Cup.

Absence from the Petit Le Mans means that Lindsey, Pat Long, and Nick Boulle will be on the sidelines.

“Regrettably, one mistake held a large repercussion,” Lindsey said. “I hold responsibility for Pat and Nick, as well as the team, missing the Petit Le Mans which is a great event we’ve had success at in the past.

“Park Place had a really consistent season with top-five finishes and a podium at Detroit. We had a few setbacks out of our control, but we always continued the fight.

“I just want to thank everyone for the countless hours of hard work this season. We put together a big year.”