Mazda scored its second consecutive 1-2 finish in the IMSA WeatherTech SportsCar Championship at Canadian Tire Motorsport Park, with a fateful pitstop allowing Oliver Jarvis and Tristan Nunez to finish ahead this time. 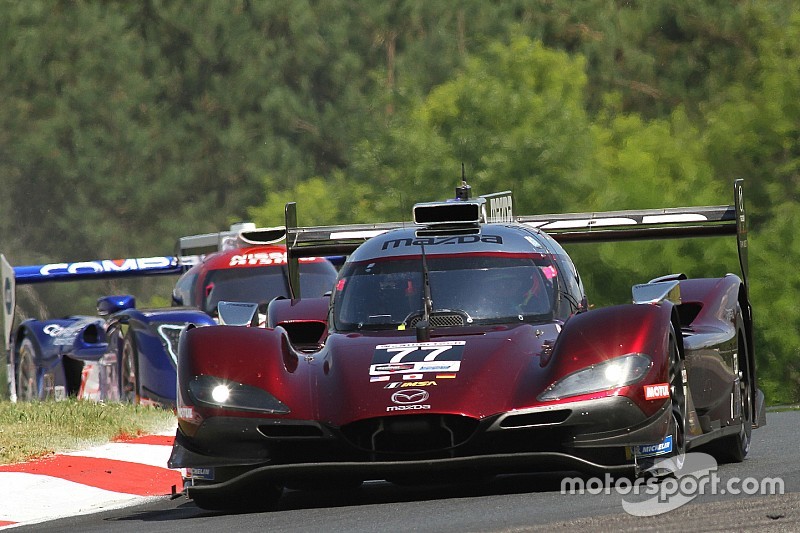 With CORE autosport electing to sacrifice pole to start Jon Bennett at the tail of the DPi field, Helio Castroneves in the #7 Acura Team Penske ARX-05 effectively took P1 leading Jonathan Bomarito in the #55 Mazda RT24-P.

They were chased by Juan Pablo Montoya in the #6 Acura ahead of Felipe Nasr’s Action Express Racing Cadillac, who jumped Nunez in the second Mazda to grab fourth, but before the end of the first lap Nunez was back ahead.

On Lap 8, Bomarito used Castroneves’ stumbling over GT traffic to pull past out of Turn 5 and immediately set a new fastest lap to pull 1.5sec clear. Meanwhile, Nunez had moved the #77 Mazda ahead of Montoya to claim third and move in on Castroneves.

Nasr was the only Cadillac driver able to live with the top quartet, as his sixth-placed teammate Filipe Albuquerque was 6.5sec down, and 3.6sec ahead of Jordan Taylor (Wayne Taylor Racing) and Simon Trummer (JDC Miller Motorsports). The latter pitted from eighth at the end of Lap 14.

Montoya hung on to Nunez who had been trying to battle past Castroneves as they went through the GTs, and his tenacity paid off with a move past the Mazda into third on Lap 25 when a GT car sent the Mazda wide.

Montoya would stop four laps later to hand over to Dane Cameron, and on Lap 30 Castroneves stopped to relinquish his seat to Ricky Taylor and Nunez stopped for Jarvis to take over. Taylor just about emerged ahead.

On Lap 31 Bomarito stopped for fuel and tires but stayed in, and he emerged still in front. However, his closest challenger was now Cameron, who’d slipped the #6 Acura ahead of the #7.

Bennett finally stopped on Lap 35 to hand over to Braun, losing a lap as he did so, and not long after, Jarvis got ahead of Taylor who would stop before the 90mins-to-go mark for fuel and tires after picking up a puncture. Cameron would also stop the #6 Acura 10mins later.

That left Bomarito with a 19sec lead by the time he pitted with 84mins remaining to hand over to Harry Tincknell. The sister car of Jarvis stopped that lap too, albeit after a very late call, but he found himself jumped by both Cameron and Taylor in the Acuras.

With 68 mins remaining, Jarvis had whittled his deficit to Taylor to under one second when the #7 Acura stopped for more tires and fuel. Up front, Cameron had done a great job in the #6 Acura to stay within four seconds of Tincknell, although he would soon have to check his mirrors as with Taylor out of the way, Jarvis had a clear run at him. He took his cue and pitted with an hour to go.

Both Mazdas went to 47mins to go when suddenly a full-course yellow flew for an off by the #38 Performance Tech Motorsports Oreca. However, the #55 Mazda which had pitted 12sec ahead suffered trouble on pitlane with its right-rear tire change, and Tincknell saw teammate Jarvis depart ahead, and now Cameron would be close behind on the restart. Meanwhile, under yellow the #7 Acura was stopped again for a top-up.

On the restart, Tincknell had to get into defensive mode to keep Cameron at bay, which allowed Jarvis to escape but then the yellows swiftly flew again for Victor Franzoni having a huge shunt in the Juncos Racing Cadillac at Turn 2. The Cadillac speared off the track, the Brazilian put his foot hard on the brakes and then tumbled into and partially over the tire wall. The race was eventually red-flagged, leaving 17mins remaining.

Tincknell again struggled slightly compared with Jarvis on the restart but this time had less of a problem holding off Cameron.

Braun had moved into sixth and was applying intense pressure to Pipo Derani in the #31 Action Express Racing Cadillac, who then moved around the outside of Taylor to grab fourth from the Penske driver. Taylor then nudged Braun off track sending him across the grass into a spin where the Nissan only just avoided spearing a GT car.

After the race, IMSA reported that Franzoni was awake and alert but had been transferred to a local hospital for further evaluation.

Jesse Krohn’s polesitting #24 BMW M8 took the lead at the start, but his teammate Tom Blomqvist dropped back to fifth behind Ryan Briscoe’s Ford GT and the two Porsche 911 RSRs of Patrick Pilet and Laurens Vanthoor.

Briscoe would cede second and third to the 911s long before the end of the first stint, although Earl Bamber took over the #912 Porsche when Vanthoor stopped on Lap 36, and the tactic paid off beautifully when Bamber nailed his laps in clear air. He hit the front when those on the regular strategy stopped on Lap 47, and John Edwards and Connor De Phillippi were nine and eleven seconds in arrears respectively.

Behind this trio, Richard Westbrook and Dirk Muller in the Ford GTs were ahead of Nick Tandy’s #911 Porsche and under pressure from Antonio Garcia in the #3 Corvette. However, Tandy would grab fifth from Muller on Lap 53, and then hunted down Westbrook soon after half-distance, although he couldn’t quite find a way around the Ford by the time he pitted with 56mins to go.

That was the same time as Bamber pitted the #912 car with a healthy 10sec lead so he was back on strategy with his GTLM rivals. Once everyone had completed their second stops, Tandy was into third, behind Bamber and Edwards but ahead of the second BMW of De Philippi and Westbrook’s Ford.

De Phillippi briefly got ahead of Tandy following the restart when Tandy tangled with Edwards ahead, but the Porsche at least recovered third before the yellows flew again and then the red came out.

The restart saw Porsche-BMW-Porsche-BMW maintain formation which held to the checkers, with Bamber and Vanthoor ensuring the fifth straight victory for the 911 RSR.

Second-placed Ben Keating in the Riley Motorsports Mercedes-AMG GT3 fell away from the top three and dropped to the back of the field on Lap 5.

Foley and Hindman had a door-bashing battle on Lap 10, but the BMW held on, and was still leading when Foley pitted on Lap 38 to hand over to Bill Auberlen.

After taking over from Richard Heistand, Jack Hawksworth drove the #14 Lexus RC F into Scott Hargrove who had run wide at Turn 5 in the Pfaff Porsche but rejoined right in Hawksworth’s path. The AIM Vasser Sullivan car was taken behind the wall for repairs to a broken steering arm, while Hargrove would serve a drive-through penalty.

The other Lexus, the #12, ran well in the hands of Townsend Bell following the pitstops, 7.5sec behind Mario Farnbacher who’d taken over the second-placed #86 Acura. Farnbacher was running 10sec behind Auberlen but 6.6sec ahead of Pat Long’s Park Place Motorsports Porsche 911 GT3 R, which in turn had a 5sec lead over Katherine Legge in the #57 Acura.

Auberlen had a 12sec lead by the time he pitted with just under an hour to go, and the lead was out to 19sec before the yellow flew with 45mins to go. He maintained his lead on the first restart before the red flag.

Following that restart, Legge had to cede fifth place to the recovering Pfaff Porsche of Hargrove, while Long’s Park Place 911 fell only 0.373sec short of separating Bell from the final podium slot.

Auberlen’s victory with Foley is the 59th of his IMSA career, leaving him just one short of record-holder Scott Pruett.

Mazda's IMSA success has been "a long time coming"