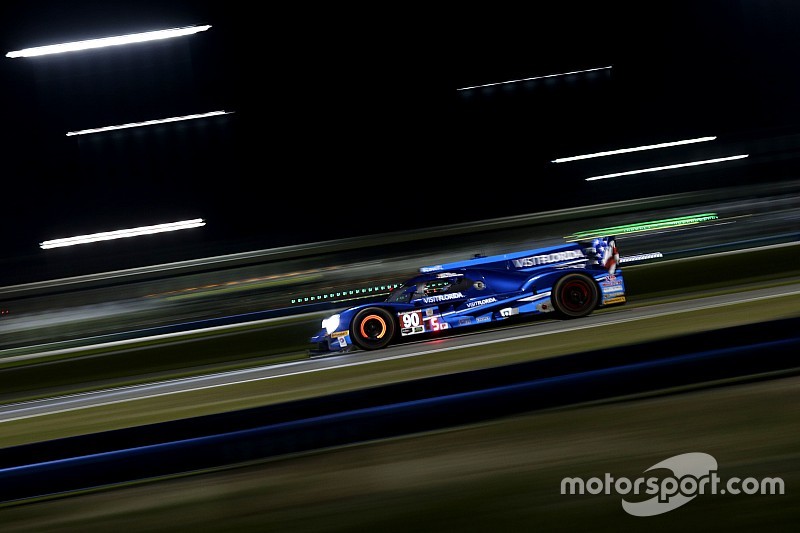 A caution period for a crashed GTD entry and an extra pitstop to replace a cut tire on the Wayne Taylor Racing Cadillac, allowed the Multimatic Riley to get within three seconds of Max Angelelli. Then authorities struck twice…

On the restart in heavy rain, Angelelli held off Rene Rast in the Visit Florida Racing Riley, but then the Italian was called into the pits for a drive-through penalty. The punishment was because at his previous stop, the WTR refueler had plugged in before the fire extinguisher operator was on standby.

Soon after Angelelli regainined the track some 55sec down on Rast’s Riley, the full-course yellow came out once more for the severity of the weather.

Christian Fittipaldi’s AXR Cadillac remains in third, a lap behind the leaders, with Pipo Derani fourth in the ESM Nissan #2. Eric Curran remains five laps behind the leader in the second AXR Caddy, with sixth place held by Spencer Pigot’s Mazda.

Kevin Estre and Patrick Pilet hold a Porsche 1-2 at the front, with Dirk Muller third in the #66 Ford GT, Toni Vilander fourth in the Risi Ferrari 488, and Billy Johnson and Harry Tincknell fifth and sixth in Fords. Antonio Garcia’s Corvette is one lap behind following its earlier drive-through penalty.

Remarkably there are a total of eight cars on the GTD lead lap. Lawson Aschenbach has the Stevenson Audi in fifth, then comes Christina Nielsen in the Scuderia Corsa Ferrari, Mark Wilkins in the second MSR Acura and V8 Supercars champion Shane van Gisbergen in another Riley-run Mercedes.

The shunt that brought out the previous yellow occurred when Nic Jonsson had a high-speed spin that scraped the Porsche 911 of CORE autosport along the wall for a long distance. Speculation continues as to whether he got a helping hand from a rival car.

In Prototype Challenge, clever tactics have allowed Buddy Rice to reclaim a lap on class leader Nicholas Boulle so that the BAR1 team is only 3 laps behind Performance Tech.