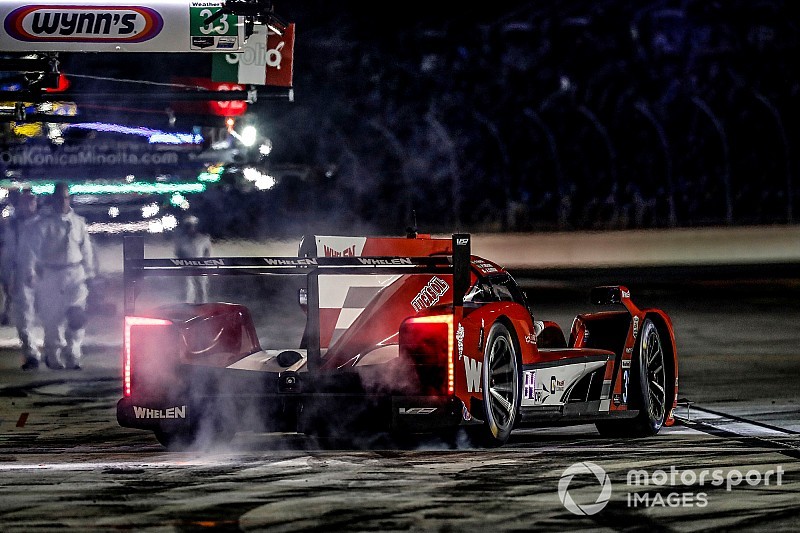 Pipo Derani is leading the Rolex 24 at Daytona in the #31 Cadillac just beyond half-distance ahead of Jordan Taylor’s Wayne Taylor Racing’s similar car, but the Acuras are closing.

A slightly different strategy, separated by around seven minutes, has seen the two Cadillac DPi-V.Rs vault ahead of the Acura Team Penske pair of Alexander Rossi and Juan Pablo Montoya, but they went back on similar strategies as another yellow flew just before the first 12 hours were complete.

If Team Penske were frustrated to somehow lose out in the previous pitstop exchange, their irritation was as nothing compared with CORE autosport, which is running the solo Nissan DPi. Just before the 11th hour, Romain Dumas – who was battling in the top five – hit electrical issues that started affecting his semi automatic gearbox.

That added three seconds to his lap time and necessitated a long stop, so the Nissan, currently driven by Jon Bennett, is now running seventh, six laps down. Ahead of him are Jonathan Bomarito in the #55 Mazda who remains one lap down and Devlin DeFrancesco in the JDC Miller Caddy who is two laps down.

DragonSpeed continues to dominate LMP2, Sebastian Saavedra running a lap ahead of teammate Nicolas Lapierre, and the Performance Tech Motorsports Oreca is third a further six laps down.

The GT Le Mans battle has raged on with little to choose between the pace of any of them. However, the #3 Corvette C7.R – which lost two laps early on due to a pitlane collision with its sister car – recovered its deficit and was leading the class when Antonio Garcia ran out of fuel on track. That’s what brought out the eighth and latest caution and cost the car four laps.

Following the inevitable rash of pitstops that followed, Philipp Eng in the #25 BMW M8 led the Porsche 911 RSRs of Nick Tandy and Earl Bamber, Oliver Gavin in the #4 Corvette, Dirk Muller in the Ford GT, and Davide Rigon in the Risi Competizione Ferrari 488.

In GT Daytona, Cooper MacNeil’s Scuderia Corsa WeatherTech Ferrari 488 is ahead of the Justin Marks-driven Meyer Shank Racing Acura, Parker Chase in the Starworks Motorsport Audi R8 and Christopher Mies in the Montaplast by Land Audi.