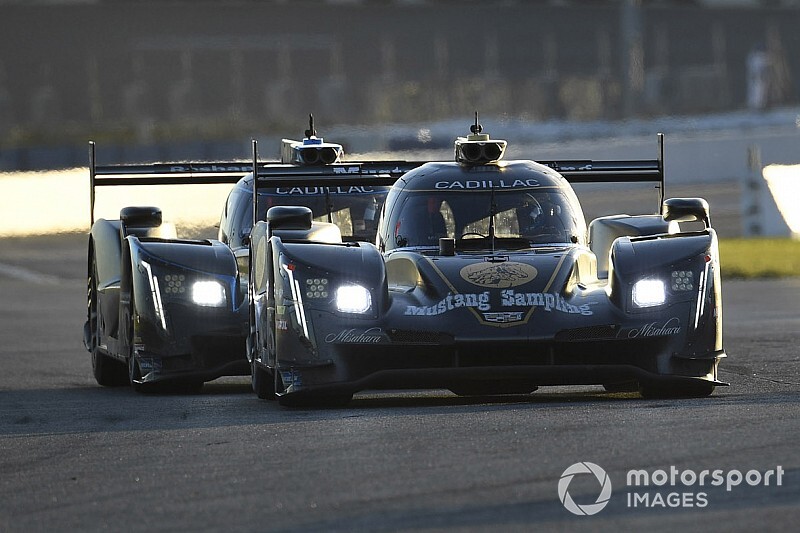 The race’s fourth caution period was required just 10 minutes into the 19th hour as the #74 Riley Mercedes of Felipe Fraga, which had just had a new battery fitted after an electrical shutdown, ploughed off the track at the International Horseshoe. Replays suggested the car cut out again before Fraga locked up and went off, fortunately without hitting anything.

That ended a record-setting green flag stint of 7hrs48mins, and the race resumed with Ryan Briscoe in the WTR Cadillac leading the JDC-Miller MotorSports car of Loic Duval and the two Mazda RT24-Ps, which got back on to the lead lap by staying out under the yellow.

But as soon as the race resumed, Briscoe – who only need to stop briefly for a short fill of gas – was adjudged to have run the red light at the exit of the pits during the caution period, and was handed a 60-second stop/go penalty.

That cost him a just over a lap, and it handed Duval a comfortable lead in the #5 Caddy over Olivier Pla’s #77 Mazda and the sister #55 car of Harry Tincknell, although the latter was struggling with an exhaust leak.

Another full-course yellow occurred just after the Hour 19 mark, as the #19 GEAR Racing Lamborghini Huracan GT3 Evo suffered a major fire after passing through the Bus Stop chicane. Christina Nielsen was forced to stop on the apron of Turn 3 of the NASCAR oval, while emergency crews extinguished the flames.

That yellow was badly timed for the #77 Mazda, which dropped to third after requiring an emergency refueling before repassed the sister car when the race went green, but was ideal for the #10 Cadillac, which got its lap back before Briscoe passed Tincknell for third.

Another yellow followed towards the end of Hour 20 when the Precision Performance Motorsports Lamborghini crawled to a halt on-track with a terminal gearbox problem.

When action resumed, Briscoe snatched second from Pla and was just three seconds off the back of race leader Barbosa with four hours left on the clock.

The #6 Acura runs fifth, while the #31 Action Express Caddy dropped 11 laps off the pace after going behind the wall and circulates seventh behind the second JDC-Miller car.

Porsche had held a 1-2 in GTLM in the new 911 RSR-19s, but the #24 BMW split them in after a fast pitstop under yellow. A brilliant battle unfolded, with John Edwards drafting past Mathieu Jaminet's #912 car for the lead with 4h33m remaining.

Just minutes before the 20-hour mark, Jaminet repassed Edwards for the lead, with Fred Makowiecki's #911 Porsche, Nicky Catsburg in the #3 Corvette C8.R and the Risi Competizione Ferrari 488 GTE of Daniel Serra all in close pursuit.

In GT Daytona, Dries Vanthoor eased the WRT Audi R8 LMS past Corey Lewis’s #48 Paul Miller Racing Lamborghini in Hour 19, with the #44 GRT Magnus Lambo slipping back to third. But the positions switched around after the fifth yellow, with Spencer Pumpelly moving the #44 car into the lead, ahead of Lewis and Vanthoor.

Vanthoor then swiftly regained his lead, but after the sixth caution period it was Lewis who moved back the fore ahead of Vanthoor and Pumpelly.

In LMP2, the DragonSpeed Oreca's advantage over the PR1/Mathiasen Motorsports Oreca was cut from three laps to just 15 seconds after the spate of full-course cautions.