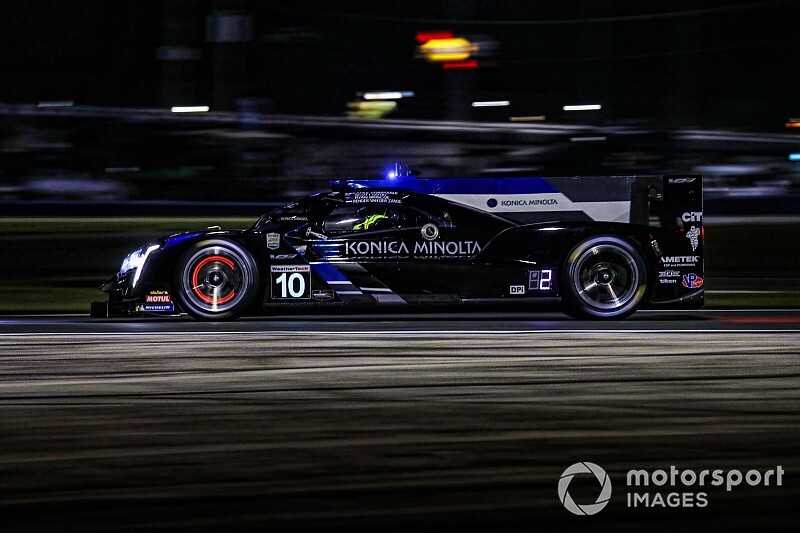 Kamui Kobayashi wrested back the lead of the Rolex 24 at Daytona for Wayne Taylor Racing and had established a small buffer out front with 10 hours of the race to go.

The battle between the top two cars overall tightened significantly after Kobayashi took over the #10 WTR Cadillac DPi-V.R just after the 12-hour mark, as the Japanese driver rapidly eroded the advantage of the JDC-Miller MotorSports Caddy of Joao Barbosa.

Some 20 minutes later, Kobayashi had arrived on the tail of Barbosa, who couldn't maintain the rapid pace set by his teammate Loic Duval in the previous stint, and towards the end of the 13th hour the Toyota LMP1 racer took the lead with a bold pass around the outside at Turn 1.

From there, Kobayashi was able to build an advantage of some 12 seconds before Barbosa brought in the Mustang Sampling-branded car to hand over to new full-time IMSA teammate Sebastien Bourdais just a few minutes before the 14-hour mark.

Action Express Racing made it a Cadillac 1-2-3 at the head of the field with Mike Conway at the wheel of the Whelen Engineering-liveried #31 car.

The two Mazda RT24-Ps circulate in fourth and fifth, led by the #77 being driven by poleman Oliver Jarvis, although the sister #55 car of Harry Tincknell was having to fight to remain on the lead lap while being pursued by Kobayashi, finally dropping a lap when he pitted.

PR1/Mathiasen Motorsports retained a healthy one-minute lead in LMP2 but Simon Trummer pitted just before the 14-hour mark, giving Ben Hanley an advantage of around 20 seconds in the DragonSpeed car, albeit having done one less stop.

BMW's battle against Porsche for GT Le Mans honors continues to be tightly-fought, although the #24 M8 GTE had been able to pull out an advantage of some seven seconds in the hands of Aussie Supercars star Chaz Mostert midway through the 14th hour.

Earl Bamber had that gap back down to just half a second in the best of the all-new Porsche 911 RSR-19s before he and Mostert both pitted, at which point the BMW driver was able to stretch its advantage back out to 7s as Bamber handed over to Mathieu Jaminet.

Corvette Racing's sole surviving C8.R had managed to move up to third, but at the most recent pitstop cycle the #3 car of Antonio Garcia had slipped to fourth behind Matt Campbell in the second factory Porsche, with the Risi Competizione Ferrari holding fifth.

A slow stop for the WRT Audi R8 LMS, which had been leading in GT Daytona by some 30 seconds with Dries Vanthoor behind the wheel, promoted the GRT Magnus Lamborghini Huracan GT3 Evo into the top spot, John Potter taking over from Marco Mapelli.

Paul Miller Racing's Lambo - which was delayed when Bryan Sellers picked up a penalty for wheel-spinning on the jacks - ran second in the hands of Corey Lewis, some four seconds back, followed by the Scuderia Corsa Ferrari 488 GT3 of Cooper MacNeil.

The #86 Meyer Shank Racing Acura NSX GT3 dropped 17 laps off the class lead after having to go behind the wall to repair a broken splitter.