The Wayne Taylor Racing squad has established a strong hold on the Rolex 24 at Daytona with eight hours left to run, as Renger van der Zande continued Kamui Kobayashi's fine work out front. 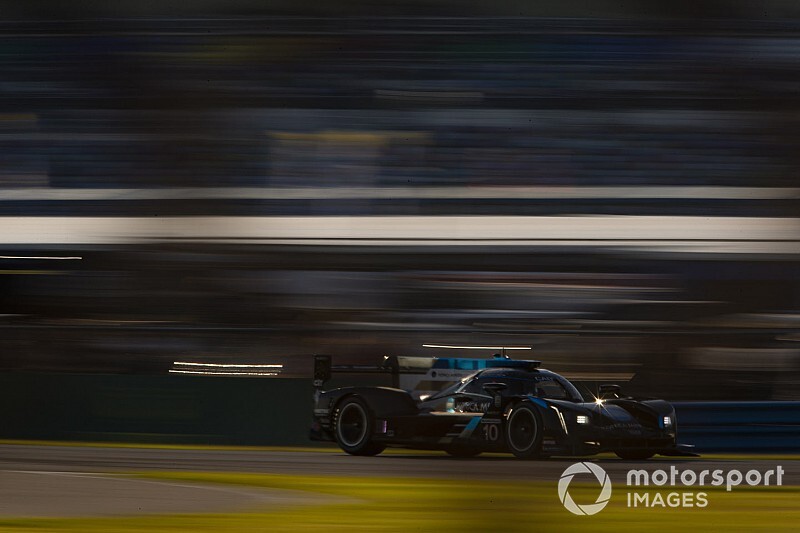 After Kobayashi's pass on Joao Barbosa's JDC-Miller MotorSports Cadillac DPi-V.R to take the lead, the Japanese driver had built a lead of more than 30 seconds when he pitted towards the end of the 15th hour to hand over the #10 WTR car to van der Zande.

The gap between van der Zande grew during the following hour, with the #5 JDC-Miller car - now driven by Sebastien Bourdais - slipping behind the #31 Action Express Racing Cadillac that was running strongly in the hands of Mike Conway.

However, the AXR car lost out when Conway handed off to Felipe Nasr, moving back behind not only the #5 machine but also the #77 Mazda RT24-P of Tristan Nunez.

Van der Zande pitted just before the top of the hour and returned to the track with a lead of 51s, with Nunez sitting 17s behind Bourdais in the fight for second and 12s clear of Nasr.

Jonathan Bomarito was a lap down in the #55 Mazda in fifth, with the best of the Acura Team Penske cars suffering with bottoming issues and running two laps down in sixth with reigning IMSA Prototype champion Dane Cameron at the wheel.

The battle in LMP2 continues to tighten as DragonSpeed recovers the deficit to the class-leading PR1/Mathiasen Motorsports Oreca.

Ben Hanley pitted the DragonSpeed car just shy of the 16-hour mark to hand over to Colin Braun, who resumed with a 29s deficit to Gabriel Aubry in the PR1/Mathiasen car.

In GT Le Mans, the lead changed hands twice as Porsche's lead car passed the BMW that has commanded the class for much of the race, only for BMW to retaliate.

Chaz Mostert in the #24 BMW M8 GTE and Mathieu Jaminet in the #912 Porsche 911 RSR-19 pitted together towards the end of the 15th hour, and shortly after Mostert relinquished the controls to Jesse Krohn, Jaminet was able to pass for the lead.

But the Frenchman couldn't get away, and when the two cars once more pitted together around an hour later, this time Krohn was able to take advantage of Jaminet giving up the #912 car to Laurens Vanthoor and wrest back the advantage with just over eight hours to go.

Nick Tandy had the second Porsche within 11s of the class lead, ahead of the sole remaining Corvette C8.R of Antonio Garcia and Alessandro Pier Guidi in the fading Risi Competizione Ferrari 488 GTE, which had dropped more than 30s off the fight for third.

Leading the GT Daytona division was the Paul Miller Racing Lamborghini Huracan GT3 Evo, thanks in part to an assured stint from Corey Lewis.

Recovering from the drive-through penalty picked up by Bryan Sellers, Lewis moved back into the class lead before handing over to Lambo factory driver Andrea Caldarelli, who had built an advantage of some 56s over the rest of the field with eight hours to go.

Dries Vanthoor had recovered to second in the WRT Audi R8 LMS, followed by Spencer Pumpelly in the GRT Magnus Lambo, Jeff Westphal in the Scuderia Corsa Ferrari 488 GT3 and Lawson Aschenbach in the Riley Motorsports Mercedes-AMG GT3.

Pfaff Motorsports' pole-sitting Porsche 911 GT3 R dropped out of the GTD fight as it was pushed behind the wall in the 16th hour.