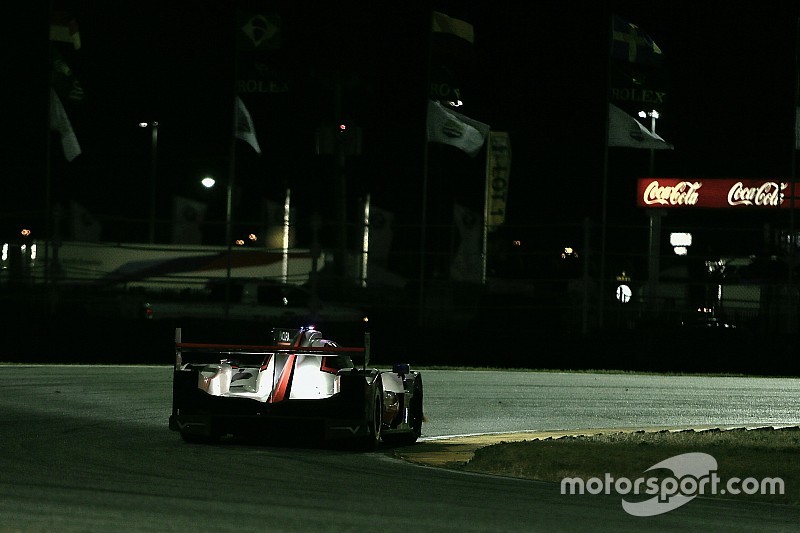 The Action Express Racing and Wayne Taylor Racing Cadillac DPi-V.Rs have had a small but decisive edge over the Acuras in the cold of the night, and following the latest restart Nasr was able to fend off the Acura Team Penske ARX-05 of Rossi to focus on Taylor. Three laps later, at the Bus Stop chicane, he slipped ahead and pulled away at a similar rate to that at which Taylor had dropped the Acuras in the previous stint.

Both Acuras had nose changes in the last 90 minutes; the one for the #6 in Juan Pablo Montoya’s hands was more expensive as it came under green-flag conditions, while Rossi’s was under the full course caution, caused by the beleaguered #55 Mazda RT24-P stopping out on course in Olivier Pla’s hands.

Dane Cameron, who has relieved Montoya of his duties, holds fourth currently but is losing time to Rossi who has now passed Taylor and is pushing Nasr hard.

The considerable delay for the remaining Mazda promoted the #85 JDC Miller Motorsports Cadillac of Rubens Barrichello into fifth, albeit still two laps down. Meanwhile, Loic Duval has moved up to sixth after the CORE autosport-run Nissan DPi’s earlier electrical troubles, but is running 5 laps down.

The #81 DragonSpeed Oreca now leads LMP2 in the hands of Ben Hanley and runs seventh overall, with his teammate Roberto Gonzalez gradually dropping away but still easily able to hold down eighth.

The wonderful GT Le Mans battle currently features a Porsche 911 RSR 1-2, Laurens Vanthoor narrowly ahead of Patrick Pilet, with Sebastien Bourdais three seconds down in the #66 Ford GT, desperately trying to hold off Augusto Farfus in the BMW M8 and James Calado in the Risi Competizione Ferrari 488.

Five-time IndyCar champion Scott Dixon is up to sixth in the #67 Ford and lapping faster than any of them, but he remains a lap down.

So too is the #4 Corvette which required nose repairs after striking something on the track.

Behind this battle, Jeff Westphal is running third in the Scuderia Corsa WeatherTech Ferrari 488 just half a second ahead of Corey Lewis in the Paul Miller Racing Lamborghini Huracan.

Nick Cassidy is driving the Lexus RC F of AIM Vasser Sullivan in fifth ahead of Andy Lally in the Magnus Racing Lamborghini.