DeltaWing prototype tops a practice session for the first time 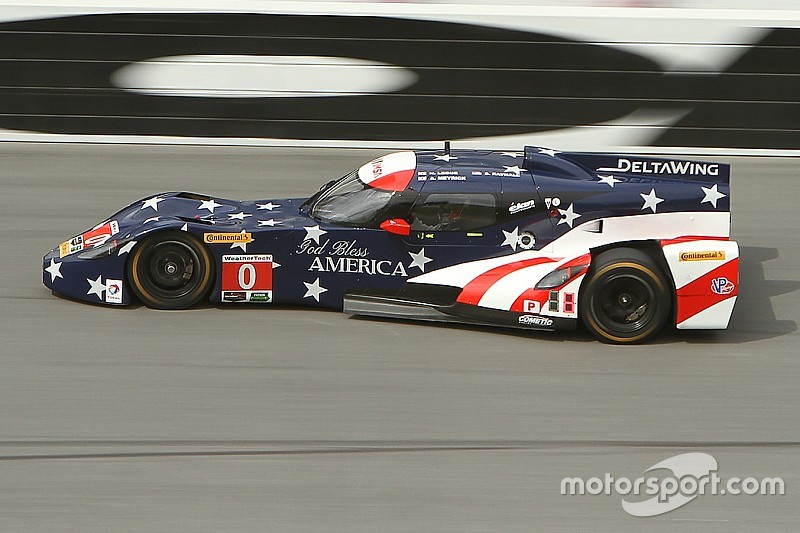 Daytona Beach, Fla.– Saturday was a day for emerging storylines at the Roar Before the Rolex 24 test sessions at Daytona International Speedway, starting with the surprising sprint to the top of speed charts by the revolutionary DeltaWing Prototype, driven by former IndyCar Series regular Katherine Legge.

The exotic-looking DeltaWing has been in competition since 2012, with limited success. But Saturday was a day for optimism after Legge led the first of three Rolex 24 At Daytona practice sessions on the 3.56-mile road course with a fast lap of 1 minute, 40.137 seconds (127.985 mph) in the No. 0 DeltaWing DWC13.

It's exciting to be back at Daytona and be fast,

It marked the first time a DeltaWing has topped a practice chart. In the process, it edged Friday’s fastest entry, the No. 60 Honda HPD Ligier JS P2, which ended the first session with a second-best 1:40.182 (127.927) lap.

“It's exciting to be back at Daytona and be fast,” said Legge, who is co-driving with Andrew Meyrick, Sean Rayhall and Andreas Wirth. “Being on pace and up with the leaders shows just how much we're improving. And the great news is that I still feel we have more to give."

The three-day Roar Before the Rolex 24, which wraps up today – sessions run from 9 a.m. until 3:40 p.m. – is the first action of the year for the IMSA WeatherTech SportsCar Championship, enabling preparation for the season-opening Rolex 24 on Jan. 30-31.

Scott Pruett was already in the storyline queue, before the first car hit the track this weekend. He’s a five-time Rolex 24 champion, an all-time record he shares with Hurley Haywood. In the quest for a new record, Pruett has changed teams for this year’s race, leaving Chip Ganassi Racing to join Action Express Racing; he’s co-driving a Corvette DP with reigning WeatherTech Championship Prototype class champions Christian Fittipaldi and Joao Barbosa, plus Filipe Albuquerque.

“The good Lord has blessed me with this incredible career,” Pruett said. “Winning this race as many times as I have … there are those tracks and those races that are truly magical. For me, one has been Indy (Indianapolis Motor Speedway) and most certainly and more so, Daytona [International Speedway]. I love coming here and being a part of [the Rolex 24].

“It’s exciting to be with Action Express and the whole group. It’s new, having been with my last team for 12 years. A championship-winning team is incredible to drive for … it’s going to be a lot of fun.”

The challenge is provided in partnership with Whelen Engineering in the USA and Anglo American Oil Company in the UK and Europe, enabling racers in selected Sunoco-fueled series to compete against each other, with the Rolex 24 ride at stake. The 2015 Challenge was open to competitors from Radical Enduro, Radical European Masters, British GT3 and Britcar Endurance.