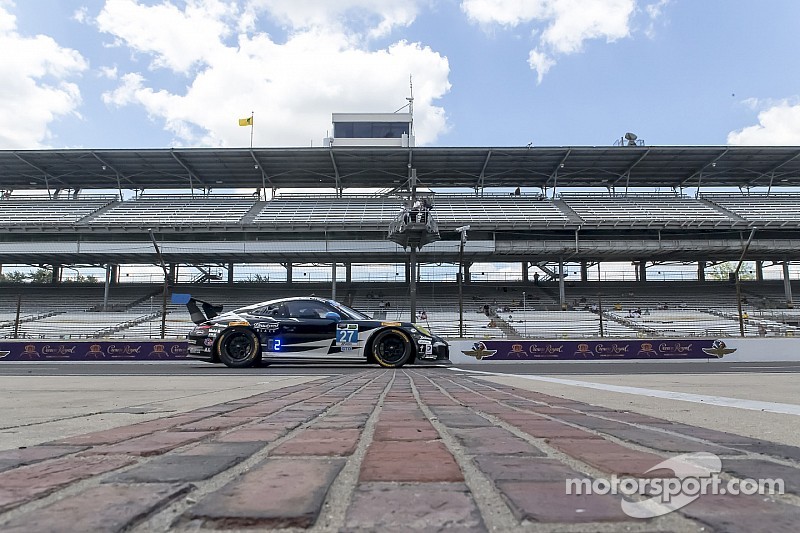 Team owner and driver Patrick Dempsey co-drove the No. 27 with Andrew Davis while Madison Snow and Jan Heylen shared the No. 58.

“I think we had a good finish,” said Dempsey, starting driver of the No. 27. “I think I drove well in the traffic, and we were up to fifth under an early yellow, which was great, especially since it is Indy. It’s good that it was a top 10, but you can see that some of the Porsches are really struggling.”

Both Dempsey Racing Porsches ran on the GT Daytona (GTD) lead lap throughout the race but track position was at a critical premium in the 2-3/4-hour timed sprint. Traffic was a major factor in the Brickyard Grand Prix, the first non-endurance race in the brief history of the IMSA TUDOR United SportsCar Championship in which all four series classes raced together.

Taking the green from the seventh row, Dempsey did a masterful job avoiding the numerous early contact incidents – that produced two caution periods in the race’s first 30 minutes and three in total in the first hour – and improved several spots and his lap times before handing off to Davis just past the one-hour mark.

The team’s focus on a long-run setup made it tough going for Davis to match the lead pace early in his shift, but as the race settled down after the final round of pits stops he had his laps of the day. The all-green run to the checkered flag allowed him to gain ground on the field and crack the top 10 for a ninth-place finish.

“The car held up the whole time,” said Davis. “We are still slowly making progress with our Porsche. We didn’t have a car to fight, but in the long run it was a good car to have. Everyone is working hard. This is always a difficult weekend because it’s all so close together.”

The No. 27 now has two top-10 finishes in the last three IMSA TUDOR Championship races, including a season-best fourth-place finish last month at the Sahlen’s Six Hours of The Glen

The No. 58 Porsche of Snow and Heylen was the team pacesetter in practice and qualifying, starting seventh on the grid and setting the fastest GTD time in final practice before qualifying. The team also joined Davis and the No. 27 in ranking fifth (58) and sixth (27), respectively, in Thursday morning’s opening practice.

A spate of bad luck in the race, however, culminating with an untimely yellow, left the No. 58 duo with the undeserving 11th place result. Starting driver Snow worked his way to the front in a strong opening stint and led the race before handing off to Heylen.

“We drove a good race,” said Snow. “We just didn’t have race pace to keep with the other cars. We could do fast laps but then we would fall off. It was hard to pass but that’s just the track. We had a yellow that really didn’t work for us. We didn’t gain what we could have or come out where we should have, but we still had a good race.”

Heylen went from battling for the team’s first podium result since finishing third at the season-opening Rolex 24 to just pushing for as many positions as he could after the ill-timed yellow.

“We’re here to win so I’m just disappointed,” Heylen said. “Disappointed for the team, disappointed for Madison and myself. We’ve had a good car many times and we just can’t get it on the podium. Everyone deserves it. It’s one thing if you don’t have the car to do it with but we do. I think there’s really only been one race this year where we didn’t have the podium pace.”

Marquez: “Lorenzo faster, but Rossi gets the job done”