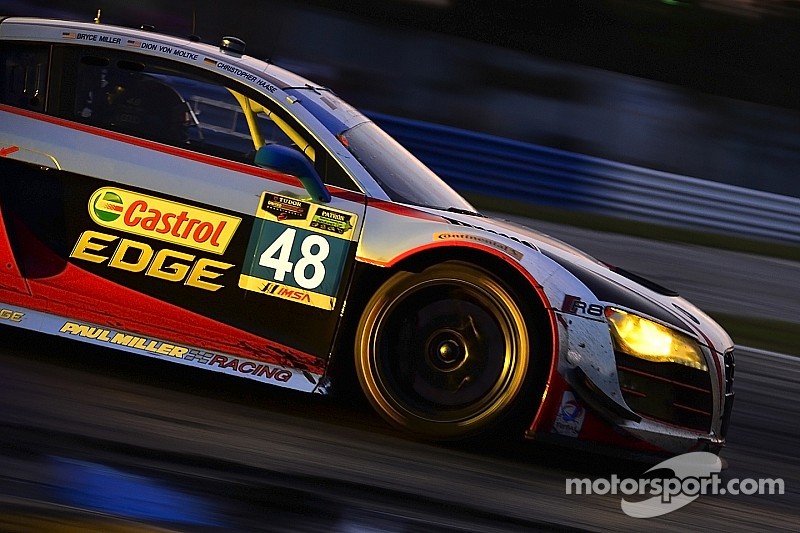 After a couple great finishes to start off 2015, Paul Miller Racing driver and Motorsport.com blogger Dion von Moltke talks about his top five at Sebring.

It’s been a while since I have written a blog for Motorsport.com, but coming off back to back top five finishes at the Rolex 24 Hours at Daytona and the 12 Hours of Sebring I thought what better time to get back to writing!

Since my last contribution, I have had one of the roughest off seasons of my life, which in the end worked out amazingly as I have found a new home with Paul Miller Racing. We really hit the ground running together and I can’t wait to see what the rest of this season holds, but let's start with the 12 Hours of Sebring.

As a driver, as soon as you drive across the bridge going across turn 17, and into the paddock you can’t help but get chills and excited as you see campers lined up all down the front straight and the rest of the infield. My first Sebring was in 2011 and all I heard about then was how crazy and cool Sebring “used” to be. Since then I have seen it grow year after year, and this year was simply incredible.

On the Wednesday night track walk (before the TUDOR Championship cars had even been on track) it was packed, fans were yelling at competitors walking the track, making it a little difficult to actually have a serious conversation with the team manager. It made our track walk far more entertaining than it normally is!

Talk of the weekend

The talk in the paddock throughout this race weekend was simple: HEAT. We all know Florida is hot, but 90’s… in March, is crazy. Our engineer at Paul Miller Racing, Dave Fullerton, was able to get a really good balance on our Audi R8 LMS. This allowed us as drivers to really focus on cockpit cooling with the team, as we knew this would be vital to driver performance during the race Sunday. The team put in a brand new extension onto our fan to get the point of where the air blows closer to the driver so we could actually feel it, which we couldn’t previously in those conditions. When the racecar gets extremely hot, to me this is the most important thing.

Bryce Miller did a great job to qualify our car in the top 10 in the highly competitive GTD class. In the race our rotation of drivers went Bryce, meyself and then Chris Haase. Bryce started the race and showed great pace, so I was really excited to get in the car next and see how our balance was. I got in the car an hour into the race after a yellow flag, which pushed us back to 13th place. In my stint, I was able to work up to 2nd place, which was one of the most fun stints I have ever had.

Sebring is an “endurance” race, but I can promise you we are all racing hard as we could the entire race. We went three-wide multiple times every stint through traffic and battling for position, and that’s what makes Sebring so exciting each year.

Throughout the race we were battling in the top five, but as the hours started to dwindle some of our competitors seemed to find an extra gear that we just could not match. The race ended with me doing a double stint, and then Chris finishing the race with a double stint. It was during these doubles we were really happy that we had worked so hard with the team to get the new fan system in the car and help the driver cooling.

Throughout the day, the track temps rose above 125 degrees, and it was a lot warmer than that in the car. In the closing hour of the race, Chris was running strong in 6th place and with less than three laps to go the leader had a mechanical failure which gifted us 5th place and another top five finish for Audi at the Sebring 12 Hours. In the end, 5th place is decent points and actual pace wise throughout the race about where we should have ended up, but we are not happy with that.

The great thing at Paul Miller Racing is everyone is driven to win; it is why we compete, it pushes us to get better every race.

We now have six weeks before our next race at Mazda Raceway Laguna Seca, where the team will be working hard. We have a dealership visit coming up at a brand new Audi dealership in Greensville, South Carolina April 21st. I will be attending that and spending a lot of time in the gym and on the simulator to try and keep fresh as possible with all my focus on the next race.

Dion von Moltke is a professional race car driver with Paul Miller Racing in the TUDOR United SportsCar Championship, and is a contributor to Motorsport.com.

TOTAL teamed up again with IMSA