The Honda-powered HPD ARX-03b of Ryan Dalziel and Scott Sharp challenged for a podium finish in Saturday’s Tequila Patron Sports Car Showcase at Long Beach, but the lack of a single full-course caution during the second half of the 100-minute timed event spoiled the strategy for the Extreme Speed Motorsports effort, forcing Dalziel to slow drastically during the final laps and dropping him to an unrepresentative sixth-place finish.

The third round of the 2014 TUDOR United SportsCar Championship, and first temporary street circuit event of 2014, saw the Dalziel/Sharp HPD – along with teammates Ed Brown and Johannes van Overbeek in a second HPD machine – seeking a second consecutive Long Beach victory, and a fifth overall win in the last six years of sports car competition for Honda. 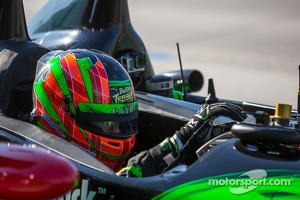 Starting eighth after a transmission issue in qualifying, Sharp quickly moved the #1 HPD up to fifth, then handed off to Dalziel at the team’s single scheduled pit stop, just prior to the halfway point of the race. Dalziel immediately improved to fourth overall and continued to gain ground on the leaders, until it became apparent the race would run caution-free. Dalziel was forced to reduce his pace, and slowed even further on the final lap, dropping him to a disappointing sixth-place result.

Extreme Speed’s second LMP2-style prototype, the #2 HPD ARX-03b Honda, was started from seventh by Brown and sustained minor body damage in early-race contact with a GTLM-class entrant. Dropping to 15th after the contact. He recovered several positions before handing the HPD over to van Overbeek at the mid-race pit stop. Van Overbeek finished his run without any major issues to finish seventh, just behind teammate Dalziel.

The inaugural TUDOR United SportsCar Championship resumes next month, moving up the California coast to Laguna Seca Raceway for the May 4 Continental Tire Monterey Grand Prix.

Allen Miller (Project Leader, Honda Performance Development) on today’s race: “Unfortunately, we didn’t quite have the pace we needed this weekend [to contend for the victory]. We struggled for grip in the race, and that led to a decision to attempt to stretch the fuel mileage with the #1 Extreme Speed Motorsports entry. But, without a yellow [caution flag], it then became necessary to lean out the mixture to ensure a finish, and Ryan [Dalziel] quickly went from gaining ground on the leaders, to losing positions in the final laps.”

Ryan Dalziel (#1 Extreme Speed Motorsports HPD ARX-02b Honda) finished 6th: “I think we got the most out of the cars, but it has been a difficult weekend. The team did a great job of maximizing what we had. Unfortunately, we were just a little bit behind the top three or four cars. We gambled a little bit on fuel strategy. We were hoping for a yellow right after we pitted as that would have put us in the lead [as the rest of the field would pit]. That’s what happened to us at [the 12 Hours of] Sebring [when the eventual race winner pitted just before a full-course caution], so we tried to use it to gain an advantage today. But it wasn’t our day. We threw the dice and it didn’t work out.”