Extreme Speed Motorsports (ESM) set a new team record at the 62nd Mobil 1 Twelve Hours of Sebring Fueled by Fresh from Florida as both of the Tequila Patrón-sponsored teams and drivers finished in the top-five at Sebring. 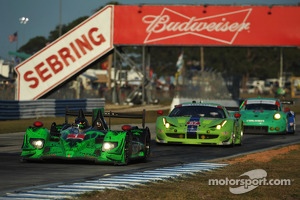 At the six hour mark of the event, Dalziel was leading the race. He led for the majority of the stint and turned the car over to Sharp for his second stint of the race.

Sharp battled the traffic following his driver change pit stop sequence and was shuffled back in the standings. As the afternoon turned to evening, Sharp turned the car over to Brabham.

Brabham charged to the front of the field to lead the race during his stint. As the cooler evening hours progressed, the No. 1 machine was improving with each lap turned. With less than two hours to go, the final driver change was made and Dalziel would complete the race.

Dalziel reclaimed the race lead at 8:49 p.m. and led for 30 minutes before the caution flag was shown for a prototype car that was off track. While under caution, Dalziel pitted and relinquished the race lead to Marino Franchitti in a Daytona Prototype. The caution lasted slightly longer than 30 minutes.

Once the race was back to green and with 18 minutes remaining on the race clock, Dalziel was running second. Despite running faster lap times than Franchitti, traffic prevented Dalziel from catching the first place car before the checkered flag.

The No. 2 car also battled traffic and had a rollercoaster ride up and down the leaderboard. Pagenaud took the overall race lead near the seven hours completed mark (5:30 p.m.). Similar to the No. 1 machine, as evening drew near, the No. 2 Tequila Patrón race car was showing better speed than the competitors. Pagenaud completed his stint and turned the car back to van Overbeek.

In his second stint, van Overbeek led for nearly 40 minutes, and then around 6:30 p.m., he tangled with a GTD car. That contact dropped van Overbeek from first to eighth. Van Overbeek pitted for the team to inspect the HPD and determined the only damage was to the side pod. A quick bit of repair and he was returned to the track.

Pagenaud returned to the No. 2 machine with approximately two and a half hours remaining. He continued to battle traffic and reached as high as third place. Pit stop sequences and traffic prevented Pagenaud from advancing further than fifth position.

This marks the second consecutive top-10 finish for the No. 2 team. In Daytona, Pagenaud, van Overbeek, Brown and Anthony Lazzaro finished in seventh place.

Next on the schedule for Extreme Speed Motorsports is the Tequila Patrón Sports Car Showcase at Long Beach scheduled for April 11-12.

Wayne Taylor Racing: Sebring proves to be a handful