The blue and white Audi finished 6th in class at Sebring.

Following a heartbreaking season-opener at Daytona in late January, #46 Fall-Line Audi R8 LMS crew rebuilt and came close to redemption at Sebring International Raceway for the 2014 Mobil 1 Twelve Hours of Sebring Fueled by Fresh From Florida. The trio of Charlie Putman, Charles Espenlaub, and Christopher Mies finished the race on the leap lap, just 17 seconds behind the leader in the GT Daytona (GTD) class in what was a crash-plagued race with 11 full-course cautions.

Mies qualified the #46 car in 20th after catching traffic on his flying lap. He started the race and drove a double stint to make it all the way to P1 in just over two hours. Espenlaub was second in the car and drove for one hour before pitting and handing over the reigns to Putman who drove three hours straight. Putman got hit by a DP car that sent him spinning but he was able to make an impressive save and kept the car from any major damage.

At the halfway mark the #46 was running P11 under full-course caution and Espenlaub was back in. After more lengthy yellows, there was green flag running and Espenlaub drove a notable run climbing all the way to 3rd. Mies got in to drive the closing laps and was running P4 with two hours to go when he was also the victim of another on-track incident that cut the left front tire and he had to pit under green. Although the pit stop was executed very efficiently the time lost driving with a flat meant the #46 lost a lap. The lap was gained back as the leaders pitted and the #46 was back in the lead pack for the last hour. An emergency stop for fuel under the next yellow as the pits were closed cost the opportunity to run for the win as they went to the back of the line. The green then flew with just 20 minutes to go. Mies drove an impressive final few laps at ten-tenths but just wasn't able to make the podium and settled for 6th.

Charlie Putman:"You have to be pretty spoiled not to be happy with a 6th place finish at the Sebring 12 Hour as the teams and drivers in this race are the "Who's Who" of sports car racing. We certainly had the potential for the win or a podium finish but it just didn't come to fruition as we had hoped. A small traffic incident causing Chris (Mies) to brush a concrete wall and flatten a tire, cost valuable track position that we could not recover that late in the race. Chris did a great job saving the car from what could have been a disastrous crash and bringing it home for a new tire. Nathan's (McBride, lead engineer) strategy was inspirational and cool-headed and actually kept us in the battle right up to the checkered flag. It was a hard fought 12 hours as the number of crashes and resulting caution periods demonstrated. We did manage to run in the top-5 for the largest part of the race and Charles (Espenlaub) actually led the field for the majority of his first stint. I was proud of the crew as they picked up a position for us on almost every pit stop. We may not have taken first, but I was extremely proud of the entire team." 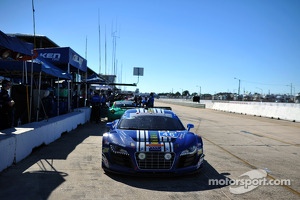 Christopher Mies: "I am quite happy with the result we achieved. We came all the way from P20 and finished P6. With a little bit more luck we could have finished on the podium and we were for sure one of the teams who could have won this race. But in the end you always need a little bit of luck.A huge thanks to Fall line Motorsports and my teammates Charles (Espenlaub) and Charlie (Putman) for their brilliant job.We worked very well together and improved the car each session. In the end the car was just phenomenal to drive during the race and I enjoyed every single lap. The team and my teammates did a great job without mistakes and I hope I can come back with them next year. Sebring was one of the toughest races I have ever done, and finishing just 17 seconds behind the class winner is more than awesome! I would love to join them at a later date and I wish them good luck for the rest of the races."

Michael Harvey, Fall-Line Motorsports Team Manager: "I am so proud of everyone at Fall-Line Motorsports and although a tinge frustrated with 6th place overall very happy. The guys on the both sides of the wall competed flawlessly and with 2 hours remaining we had a strong shot at the win. Unfortunately we got attacked by a DP and although not a killer blow, it was enough to dampen our day. It was great to rebound after the disappointment of Daytona and to run at the front in this historic event. A huge thanks to Audi Sport customer racing for all their support and encouragement, without Brad (Kettler) and his team the post Daytona rebuild would definitely have been much more difficult."

Al Carter was busy in Sebring