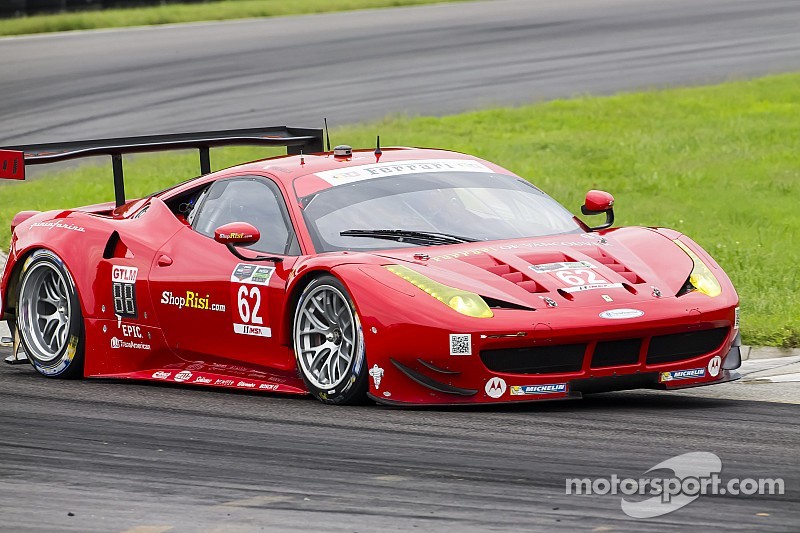 Ferrari continues to find new reasons to celebrate in its 60th anniversary celebration of racing in North America.

Two races after scoring its first pole in the TUDOR United SportsCar Championship GT Le Mans (GTLM) class at Indianapolis Motor Speedway, and one race after a breakthrough first win at Road America, Giancarlo Fisichella made a last-lap pass on Wolf Henzler to score a second consecutive victory in the No. 62 Risi Competizione Ferrari F458 Italia (in photo) Sunday in the Oak Tree Grand Prix at Virginia International Raceway.

A late caution set up a six-minute sprint to the checkered flag, with Fisichella immediately attacking the No. 17 Team Falken Tire Porsche 911 RSR of Henzler. The two went side-by-side multiple times throughout the final four laps with Fisichella making the race-winning pass on the final lap in Turn 11.

“I knew it was the last lap and I did all I could do,” said Fisichella, who was joined by co-driver Pierre Kaffer in the victory, just as he was two weeks ago at Road America. “I got close to Henzler and I was lucky because I even had a good exit. Once I took the lead, I was quicker than him in the straights.”

Henzler, who took over for co-driver  Bryan Sellers, was tasked with conserving enough fuel to get to the finish throughout his one hour, 10 minute stint, while also maintaining enough pace to stay ahead of the rest of the GTLM field. A caution for the stopped Porsche 911 RSR of Michael Christensen with 12 minutes remaining allowed Henzler to save enough fuel to finish the race, but also put Fisichella right on his rear bumper.

The next race for all four TUDOR Championship classes will be Circuit of The Americas in Austin, Texas on Saturday, Sept. 20. That race will feature FOX network television coverage on Sunday, Sept. 21.

Dane Cameron swept to the inside of Damien Faulkner with 45 minutes remaining and led the rest of the way to take the fourth GT Daytona (GTD) victory of the season for the No. 94 Turner Motorsport BMW Z4 started by Markus Palttala in the Oak Tree Grand Prix.

Cameron took the checkered flag 1.420 seconds ahead of Alessandro Balzan, giving the team its second consecutive victory while setting up a three-way tie atop the GTD point standings with only two races remaining.

“It’s a big gain for us to come in 12 points behind and leave tied,” Cameron said. “We’re in a good position now, but we’re not going to change our strategy. We’re not going to run conservatively and run for points or anything. We’ll do what we need to win this championship.

“The last thing we needed today was that late yellow. The last thing we wanted was to be bunched up with everybody else, but I was able to get a good run coming out of the first corner and I could exhale from there. It was a pretty stressful day. It’s never easy to win in this category.”

Palttala led prior to his pit stop during the first of three cautions. Madison Snow, driving the No. 58 Dempsey Racing Porsche 911 GT America started by early race leader Jan Heylen, and Faulkner, who joined Michael Lewis in the No. 81 GB Autosport Tully’s Coffee Porsche 911, stayed out under the second caution period shortly before the two hour mark to take turns in the lead. Following the restart, Cameron needed four minutes to execute what proved to be the winning pass.

Balzan finished second in the No. 63 Scuderia Corsa Ferrari 458 Italia started by Jeff Westphal, followed by Patrick Dempsey and Andrew Davis in the No. 27 Dempsey Racing Porsche 911 GT America.

Dempsey started from the back of the field after missing qualifying due to an accident in Saturday morning practice, and worked his way up to third prior to his pit stop. Davis rejoined the race in seventh, and quickly worked his way into podium contention.

“I felt today was really important to show how much it means to me and to be in a series with these guys that are up here,” Dempsey said. “After chasing a podium for so long this year, and being here to compete, is so much fun.

“It’s a tremendous honor and privilege. When you have these moments, you’re grateful to have this experience.”