January 26, 2014 (Daytona Beach, Fla.) – Ferrari today celebrated its first class win at the Rolex 24 at Daytona since 1998. After a late yellow flag on Sunday afternoon, Level 5 Motorsports no. 555 Ferrari 458 Italia narrowly claimed a victory in the GT-Daytona field. Alessandro Pier Guidi expertly piloted the car for the final stint in a thrilling battle that would claim Ferrari’s tenth victory at Daytona. 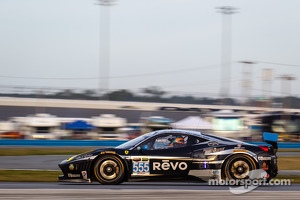 The car, which was driven by Pier Guidi, Townsend Bell, Jeff Segal, Scott Tucker and Bill Sweedler, led the competitive GT-D class throughout the night to put the car in a prime position to challenge for the victory. Strong stints during the night and morning hours set the stage for an exciting day of action for the team, which was one of a few cars remaining in contention in the race’s closing stages.

“This race has meant everything to me as an American growing up racing sports cars in America,” said Segal. “To compete here is a privilege, but to win this race with a team like Level 5 and the driver lineup that we have here, and for a manufacturer like Ferrari particularly celebrating their 60th year in North America, it’s incredible.”

Sixth place would go to the no. 556 Level 5 Motorsports Ferrari 458 Italia that was piloted by Mike LaMarra, Terry Borcheller, Milo Valverde, Scott Tucker and Guy Cosmo. Like the no. 72 SMP/ESM Racing Ferrari, Cosmo kept the car within mere laps of the leaders of the pack throughout the end of the race, holding on for a strong top-ten finish.

The no. 63 Scuderia Corsa Ferrari 458 Italia led much of the GT-D race through Saturday evening and during the overnight hours. However, Alessandro Balzan suffered contact with another GT-D class car that was several laps down, sending his Ferrari to the garage for repairs. After returning to the track, the car – driven by Balzan, Lorenzo Case, Toni Vilander and Jeff Westphal – finished in 11th place.

“Beginning the 60th anniversary of Ferrari North America with a win at the historic Rolex 24 at Daytona is simply incredible,” said Marco Mattiacci, President and CEO of Ferrari North America. “Congratulations to the drivers and crew of Level 5 Motorsports for their victory at Daytona. Hundreds of Ferrari guests enjoyed seeing the 458 Italias compete this weekend in the first race of the TUDOR Championship. The Ferrari 458 Italia is one of our most successful models on the street and it continues to prove itself time and time again with titles and awards on tracks all around the world.”

Risi Competizione driver Matteo Malucelli, who was involved in a massive incident in the race’s third hour, was released from Halifax Health on Sunday evening. The No. 62 Risi Competizione car was the only Ferrari to not finish the 24 hour race – a remarkable testament to the 458 Italia’s consistency and reliability under prolonged racing duress. The no. 57 Krohn Racing Ferrari 458 Italia finished the race in 6th position in the GT-LM class.

The next race in the TUDOR United SportsCar Championship will be the Mobil 1 12 Hours of Sebring, scheduled for the weekend of March 12-15 at Sebring International Raceway in Sebring, Florida.

Fans petition to save the Newcastle 500