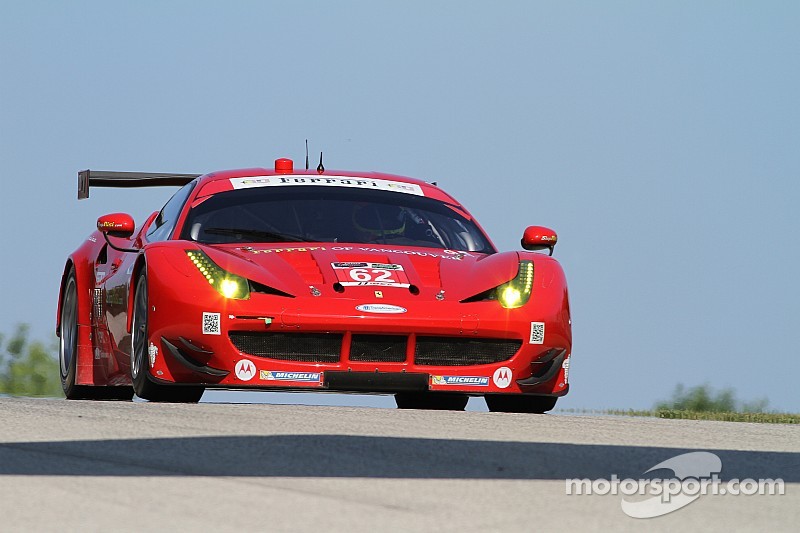 It was the first visit to Victory Lane in the TUDOR Championship for Fisichella and Kaffer after scoring podiums at Mazda Raceway Laguna Seca and Indianapolis. It certainly wasn’t easy, however, with Kaffer going head-to-head with the No. 56 BMW Team RLL BMW Z4 of Dirk Mueller throughout the final 20 minutes.

It’s great for the team and especially the 60th Anniversary of Ferrari,

On the first of two late-race restarts with 20 minutes remaining, Mueller briefly got alongside the No. 62 Ferrari before Kaffer was able to inch away. Mueller had one last shot on a final restart with 11 minutes remaining, but Kaffer was able to beat the BMW Z4 to the stripe by 1.588 seconds. Mueller and co-driver John Edwards settled for second, the fifth podium finish in eight GTLM races for BMW Team RLL this season.

“It’s great for the team and especially the 60th Anniversary of Ferrari,” said Fisichella, whose stellar season includes a win in GTE Pro at the 24 Hours of Le Mans. “I was fifth when we pitted, the guys did a fantastic job. We were able to come out in first. That was the key to the race. Pierre was able to keep the same position to the end of the race.”

With the lead out of site in the final few laps, Mueller went into defense mode in a tight battle with Jonathan Bomarito. The two raced side-by-side for several turns with Bomarito settling for third in the   No. 93 SRT Motorsports Dodge Viper SRT GTS-R started by Kuno Wittmer.

With the podium finish, Bomarito and Wittmer unofficially close to within eight points of the championship-leading No. 3 Corvette Racing Corvette C7.R shared by Antonio Garcia and Jan Magnussen in the GTLM standings.

The next race for the GTLM class will be the Oak Tree Grand Prix at Virginia International Raceway on Sunday, Aug. 24 at 4:05 p.m. ET (FOX Sports 1, live)

BMW Z4 gets third win of season with Cameron, Palttala

Determined to make up for a 15th-place finish at Indianapolis Motor Speedway, Palttala and Cameron took advantage of the situation, combining to win their third race of the season.

“We want to be on the pole because we are quickest, but this time we were a bit lucky,” said Palttala, who started the BMW Z4. “I got away first and pulled a one or two second gap. We are down on power with straight-line speed and it was always tight so it took a little bit of juggling, but it also took a little bit of everything.”

It’s been an up-and-down season for the Turner Motorsport duo. The team has a class-leading three victories, but a pair of finishes outside of the top-15 relegated the team to seventh in points heading into Road America.

“We thought we’d come in here and do some damage control,” said Cameron. “It might have looked easy because we were up front for most of the day, but we were under fire. We tried to maintain some sort of space and keep the Porsches behind us. It was unfortunate what happened to the Aston (Martin) this morning. We could have had some fun with them today.”

Leh Keen had a couple of opportunities on late-race restarts to get by Cameron, but the No. 22 WeatherTech Porsche 911 GT America started by Cooper MacNeil settled for second, 2.169 seconds back. Rounding out the top three was the No. 58 Discount Tire/Universal Industrial Services Porsche 911 GT America of Madison Snow and Jan Heylen.

The GTD class returns to the track for the Oak Tree Grand Prix at Virginia International Raceway in a GTLM/GTD race on Sunday, Aug. 24 at 4:05 p.m. ET