Ferrari ready for more historic chapters at 12 Hours of Sebring

Resilient Risi Competizione is back with new car after devastating Daytona incident.

Englewood Cliffs, N.J. - Ferrari’s 60th anniversary year in North America began in the best way possible with a victory at the Rolex 24 at Daytona in the GT-Daytona class. At this weekend’s Mobil 1 12 Hours of Sebring, the second round of the TUDOR United SportsCar Championship (USCC), Ferrari North America is aiming to continue the celebration as several Ferrari 458 Italia’s will be aiming for victory in both the GT-LeMans and GT-Daytona class.

Since the race’s first running in 1952, Ferraris have visited victory lane at Sebring a total of 33 times. The list of drivers reads like a who’s who of endurance racing legends, including racing icons Phil Hill, Juan Manuel Fangio, Dan Gurney, Jacky Ickx and Mario Andretti. This weekend, there will be six Ferraris looking to add to that tally.

Risi Competizione has scored three of those victories, but simply arriving at Sebring will also be a victory for Giuseppe Risi’s team. 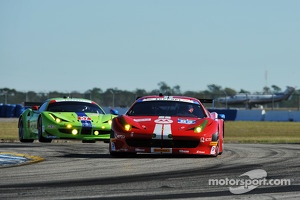 Forced to build an entirely new car after a massive incident during the third hour at the Rolex 24 at Daytona, the team has rebounded and returned to the track with a new no. 62 Risi Competizione Ferrari 458 Italia for drivers Matteo Malucelli, Giancarlo Fisichella and Gianmaria Bruni.

The GT-Daytona class will feature five Ferraris, led by the no. 63 Scuderia Corsa Ferrari 458 Italia of 2013 GRAND-AM GT champion Alessandro Balzan, Jeff Westphal, Lorenzo Case and newcomer Kyle Marcelli. The Scuderia Corsa Ferrari led the GT-D class throughout the first half of the race before an errant backmarker sent the Ferrari behind the wall for repairs.

Rolex 24 at Daytona GT-D winners Bill Sweedler and Townsend Bell will be with a new team, as they have moved to the no. 555 AIM Autosport Ferrari 458 Italia for the remainder of the season. For Sebring, the duo will be joined by Maurizio Mediani and Jeff Segal, who partnered with them to win the Rolex 24 at Daytona.

The Krohn Racing team, which scored a class victory at Sebring in 2011, will compete in the GT-LM class in the no. 57 Krohn Racing Ferrari 458 Italia with drivers Tracy Krohn, Nic Jonsson and Andrea Bertolini.

Busy week ahead for GMG at Sebring