DAYTONA BEACH, Fla. (Jan. 26, 2014) – Taking part in the legendary Rolex 24 at Daytona for the first time, CORE autosport was victorious in the Prototype Challenge category. The twice around the clock event at Daytona International Speedway opened the 2014 TUDOR United SportsCar Championship. 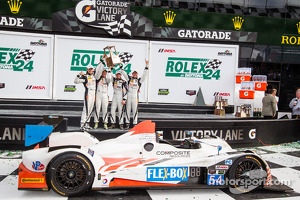 Though the team started from the PC pole, CORE’s journey to the top step of the Rolex 24 podium got off to a rocky start. On the opening lap, Jon Bennett was spun off course by a GTLM car. He recovered quickly, but went from leading the PC field, to ninth.

Lead engineer Tom Brown used pit strategy to help the No. 54 ORECA FLM09 regain a lost lap with Colin Braun in the car and take over the lead after only five hours of racing. From that point forward, the team never dropped out of the top three in class.

As other teams fell victim to mechanical problems, on-track accidents and pit lane penalties, Bennett, Braun, James Gue and Mark Wilkins charged on through 24 hours of racing without further incident.

The final hour and 10 minutes were the most anxious, as Braun found himself in a battle with former teammate Tom Kimber-Smith, driving the No. 25 ORECA FLM09 for 8Star Motorsports. The pair exchanged the lead several times and with 30 minutes remaining it became a question of who would pit for fuel first. Braun dove into pit lane from the lead. The No. 25 opted to pit a lap later, but returned to the course behind Braun.

A full-course yellow with 20 minutes remaining eroded some of the margin Braun had built to Kimber-Smith, but after a strong restart the No. 54 held on to win by a lap over the No. 25. The victory was a fitting welcome for new sponsor Flex-Box, which joined the team for the opening round of the TUDOR Championship. Flex-Box is a leading supplier of specialty shipping containers.

It was the first Rolex 24 win for all four drivers and came on a day when Porsche North America won its first Rolex 24 at Daytona in the GTLM category. CORE autosport is the competition partner for Porsche on its GTLM TUDOR Championship program.

Jon Bennett - Driver: No. 54 ORECA FLM09: “A lot of things occurred today. It was a fantastic result for our race team and our company. This is a great result for my teammates in PC and my teammates driving the Porsche. Personally, for me it was quite an accomplishment. It was probably a few steps above what I thought was possible, so I think you should never sell yourself short and dream big.

One of the biggest challenges is to come here and not get caught up in what this is. This is the unification of two series, it’s the Rolex 24, it’s twice the distance we’ve ever gone and it’s twice the distance the car has ever gone. You’ve got to put all that aside and just focus on what we do every event and that’s to follow our process and do each step of the weekend as perfectly as you can and let the results take care of themselves. It doesn’t always work out in our favor, but it’s a formula that works for us. You just have to focus on each individual step.”

Colin Braun - Driver: No. 54 ORECA FLM09: “It’s great to win it obviously that’s what we’ve all tried to accomplish. This is my 10th time competing here, so to win it is really special. I’ve tried, and I know how hard it is to win, and how many crazy things can happen and you can get stripped of it. I’m really proud of these guys; they did an awesome job.

“The biggest thing was our preparation in the off-season. We really came here with a great plan and just executed our plan. We didn’t do anything crazy and just stuck to what we were trying to do. We were able to execute and win the race.

“For me the race went pretty straightforward. CORE autosport built a great racecar. We didn’t really have any mechanical problems or anything. We just put gas in it, changed drivers and left the pits every time. The guys did a great job on pit road and were able to just do routine service and keep going. That’s why I think we were able to win the race.”

James Gue Driver: No. 54 ORECA FLM09: “This is huge. For endurance racing this is like the super bowl of sports car races. So to get a win here is by far the biggest win of my career. This goes right to the top of the list. I don’t think it’s sunk in completely yet. It’s an amazing feeling.

“This is one of the best, if not the best, team I’ve ever worked with. A month ago I wasn’t even a consideration, but I was able to integrate into the team and everyone’s been welcoming and made it a seamless transition. The guys here are top notch and it shows in the preparation and the way they call the race. It was absolutely a perfect fit.

“The key to success was to not make mistakes. Obviously the most challenging part was the traffic - dealing with that throughout the race. It was very tempting to want to be slightly aggressive and make moves, which could put you in a compromising spot. We also ended up with no penalties. I think we had one minor contact on a little bit of a stack up when there was an accident in front of us. Jon got pushed around a little bit at the start. But aside from that, in this series and in a 24-hour race, it just shows how prepared the team is and how on top-of-the game they are.”

Mark Wilkins - Driver: No. 54 ORECA FLM09: “Words can’t describe this feeling. This was my 11th start and I’ve had three podiums leading up to the win here. I thought it was just a dream to win a race here, for it to actually happen is hard to describe.

“With these long races the key entirely is to stay out of trouble. There’s lots of opportunities to get tied up with other class cars. With lots of opportunities to drop a wheel or touch a car, it just limits your ability to get to the end because the cars need to be perfectly intact to win. That’s what experience sort of taught all of us, and we were able to execute that today.

“I really thank my dad first for the opportunity to race and the opportunity to get the experience to be competitive to come and win something like this. I also need to thank Jon and Colin for believing I could get the job done. James, Colin, Jon all did an awesome job today. For CORE today is a fantastic result, especially with Porsche winning in partnership with CORE. This couldn’t be a better day and I’m certainly going to enjoy it. It feels amazing.”