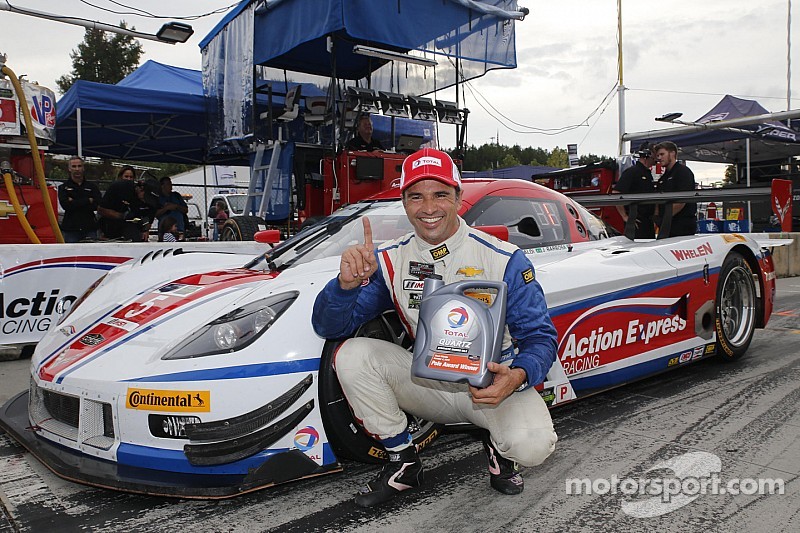 A strange and very short Prototype qualifying session – trimmed by two red flags, the second for a major crash by Tristan Nunez in one of the Mazda SpeedSource Prototypes, which spun and was hit by the number 9 Action Express car driven by Brian Frisselle – ended up with Christian Fittipaldi, in the sister Action Express number 5 Chevrolet Corvette DP, on the pole for tomorrow’s Petit Le Mans.

Fittipaldi’s lap of 1 minute, 14.508 seconds was his best of the slim seven laps he completed. Second was the number 10 Corvette of Wayne Taylor Racing with Ricky Taylor driving, followed by the number 90 Corvette of Spirit of Daytona-VisitFlorida.com, driven by Richard Westbrook. Scott Pruett was fourth in the Ganassi Ford EcoBoost Riley. Katharine Legge, in the DeltaWing, was a surprising fifth.

Fittipaldi said he knew that after he saw the second crash, the session would be shortened, with only a few laps remaining. “So I knew I had to get it done.”

This is step one for the team’s TUDOR SportsCar Championship plans – tomorrow, step two is that they “just have to get the car to start” to win the team championship, and step three is for Fittipaldi and Barbosa to get at least 45 minutes in the car each, and they get the drivers’ championship. “After that, we’ll just concentrate on the race. We’re definitely looking at the big picture.”

The first red flag was for the OAK Racing Ligier-Honda, which lost a clutch on the first lap out and never got a time. That car was the fastest in night practice with Gustavo Yacaman driving, and should be a factor in the race.

Jack Hawksworth continues to fly in the number 08 Prototype Challenge car, laying down a lap of 1:16.210 to give the RSR Racing team the class pole. Second was Bruno Junqueira in the RSR sister car. Junquiera has had three poles, but this is Hawksworth’s first. The car feels great, he said, “And I’m eager to see what we’ve got for the race.”

In GT Le Mans, there have been 11 different pole winners in 11 races, with this one being Nick Tandy in the Porsche North America Porsche 911 RSR at 1:18.350. Tandy said the strategy, which obviously paid off, was to get a few flying laps in early, as the team has had problems with rear tire grip this week. Second was the number 62 Risi Ferrari 458 Italia of Giancarlo Fisichella, followed by Bryan Sellers in the Falken Tire Porsche 911 RSR.

The factory SRT Vipers were fourth and eighth in class, and the factory Corvettes were sixth and ninth.

Fifty cars took time, but the Mazda of Nunez and the Action Express Corvette of Frisselle ranked 49th and 50th as they never got a clean lap before they crashed. After a damp morning, the track was completely dry for qualifying, but several drivers say it wasn’t as good as it was yesterday.

The 10-hour Petit Le Mans takes the green flag at 11:15 a.m. ET Saturday. It will be streamed live in IMSA.com, with Fox Sports 2 picking up coverage at 3 p.m. ET. The radio broadcast can be heard on IMSA.com, MRN.com and Sirius NASCAR Radio.