DAYTONA BEACH, Fla. (Jan. 3, 2014) - Christian Fittipaldi braved cooler than normal temperatures Friday at Daytona International Speedway, running the fastest lap in the opening day of the Roar Before the Rolex 24, a three-day test in preparation for the opening race of the 2014 TUDOR United SportsCar Championship.

The 52nd Rolex 24 At Daytona will be held on Jan. 25-26, opening a new era in North American sports car racing with the first unified sanction since 1997. The TUDOR Championship is the result of a merger of the GRAND-AM Rolex Series and the American Le Mans Series presented by Tequila Patrón.

“It was very interesting today to see different cars running together at different speeds, from four different classes,” said Fittipaldi, winner of the 2004 Rolex 24. “All in all, it was a very good day. We managed to put into practice everything we learned since our last test here. The car felt very strong, but we still have a long way to go before the race.”

Among the Friday newsmakers at the Roar was Chip Ganassi Racing with Felix Sabates, which announced its lineups for the Rolex 24, which the team has won five times. Five-time Rolex 24 winner Scott Pruett will be joined by regular co-driver Memo Rojas, NASCAR Sprint Cup Series regular Jamie McMurray and 2013 Indy Lights champion Sage Karam in the No. 01 Telcel/Target Ford EcoBoost/Riley. IndyCar champion Scott Dixon and 2013 Indy 500 winner Tony Kanaan will co-drive the No. 02 Target/Telcel entry, joined by NASCAR driver Kyle Larson and ALMS veteran Marino Franchitti. 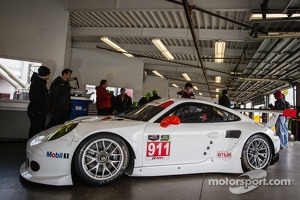 “It was a very good day, and it’s nice to be on top,” said Tandy, who won the GT class in the 2013 season-opening Petit Le Mans at Road Atlanta in a Porsche.

Testing for both series continues on Saturday beginning at 9 a.m. ET, and includes an evening session from 6:30-8 p.m.