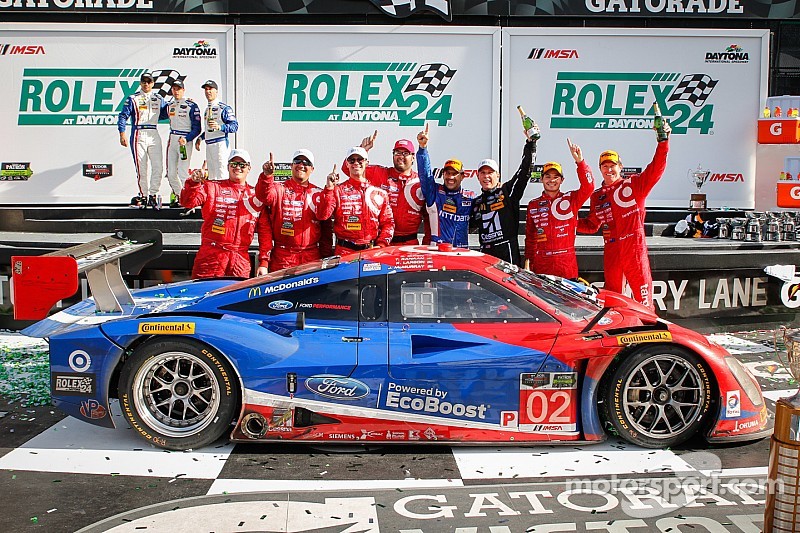 Largely carried by Dixon, who took the first and last stints in the 02 Target/Ford EcoBoost Riley, the team battled through lead change after lead change in the close-fought premier Prototype class. The efficiency of the EcoBoost powertrains led to a fuel stop strategy that helped clinch the victory in the closing minutes of the race.

“The last two days were a lot of fun in the car,” Dixon said. “Everybody pulled their weight. Everybody did what they needed to do. That’s what gets you through this 24 Hours. Everybody kept the car in one piece. You have to be there in the end. You have to try to look out for the car so you have the speed in the end to try to compete for the win…I can’t emphasize how big of a team effort it is. It’s not one person who wins this race, it’s everybody involved. This weekend, everybody on the 02 team did their best job and that’s obviously enough to get a victory.”

• With this win, Ford EcoBoost technology has won the two most important endurance races in North America – the Rolex 24 at Daytona and the 12 Hours of Sebring (2014).

• Ford is ranked sixth on the all-time manufacturer’s victory list for the IMSA TUDOR United SportsCar Championship for the Modern Era (173 wins).

“It was a great day for Ford and a great day for Ganassi,” said Raj Nair, Ford group vice president, Global Product Development and Chief Technical Officer. “We had a great car and great drivers. And, of course, we had really great power, reliability and fuel economy out of the EcoBoost. It’s just a great testament to the entire team. I couldn’t be prouder of them.”

Nair accepted the Manufacturers Trophy on behalf of Ford.

Ford EcoBoost technology is available in every new Ford car, utility and light-duty pickup in North America beginning this year. And it will continue to race on the track in 2015, competing for a championship title with Chip Ganassi Racing with Felix Sabates with the 01 Ford EcoBoost Riley prototype.

The 02 Target/Ford EcoBoost Riley team showed impressive skill behind the wheel and behind the wall. On lap 201, Tony Kanaan was forced to the garage to repair a broken splitter. The Target/Riley crew put him back on the track only one lap down.

The 2015 TUDOR United SportsCar Championship season continues March 18-21 with the 12 Hours of Sebring.