Ecoboost is ready for the tough twenty-four

In a great example of technology transfer, Ford Racing will debut its 3.5-liter EcoBoost in the TUDOR United SportsCar Series this weekend. On the eve of Ford Motor Company’s twin-turbo V-6 making its endurance racing start at the Rolex 24 at Daytona, Ford Racing’s Jamie Allison answered five questions about preparations for the ultimate American endurance race.

1) The 3.5-liter EcoBoost makes its debut at the Rolex 24 at Daytona with Chip Ganassi Racing with Felix Sebates and Michael Shank Racing with Curb/Agajanian. How much of this twin-turbocharged V-6 engine is production based?

“Seventy-percent of the 3.5-liter EcoBoost engine our teams will compete with are the same production components that serve every day in our customer’s cars and trucks. The engine block, cylinder heads and gaskets, and valvetrain drive are all stock… at double the horsepower!

2) The Ford Roush Yates powertrains sit in three cars on two teams, each with podium experience at Daytona. Have the teams been sharing data on development? 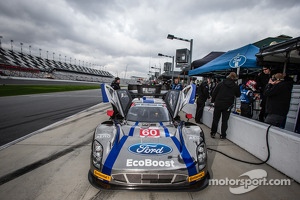 “At Ford Racing, we firmly believe in the ‘OneFord’ approach. We already have a regular forum where Shank, Ganassi, Roush Yates Engines and the Ford Racing team discuss development of all aspects of readiness, including aero, engine, chassis and overall race preparation. For example, during the Roar test, the entire OneFord team convened for a nightly post-practice session for shared learnings. With our combined mission, which is founded on racing our new 3.5-liter EcoBoost in the three Ford DPs, it requires everyone to be pulling in the same direction.”

3) What are the expectations for the EcoBoost engine platform this year?

“When we started this program two years ago with Roush Yates and Michael Shank, we knew it had the potential to become the spotlight program for technology transfer at Ford Motor Company. Adapting a new engine to racing is continuous and iterative development with extensive engineering analysis and durability testing, both on dyno and on track. For example, we have already put over 11,000 simulated race miles on the engine at our Ford Racing 17G dyno in Dearborn -- that is the equivalent of four Rolex 24 events. At Ford Racing, we have a sharp focus on using our race programs to improve the products consumers drive on the street, and vice-versa. Those ties are stronger than ever and we are working hand-in-hand with the entire Ford Product Development area, Roush Yates Engines, and our race teams to integrate the 3.5-liter EcoBoost and ultimately contend for a championship.”

4) Speaking of a championship, Ford Racing has some of the most talented endurance drivers in the world at the wheel with Chip Ganassi Racing with Felix Sebates and Michael Shank Racing with Curb/Agajanian. Does that put added pressure on Ford?

“No matter what the challenge or race, there’s always pressure to perform. Ford has a very rich history of winning in all forms of motorsports, and especially in endurance sports car racing. The Rolex 24 certainly brings its own set of expectations and challenges, and we are blessed with championship-caliber drivers and teams that now will field three EcoBoost-powered Prototypes. We know one thing – this twin-turbo engine is powerful, and the cars are fast. We wish all of our teams a great Rolex 24.”

5) We’ve heard about the challenges these teams faced during the Roar Before the 24 test. What’s the story?

"With any development program, there will be learnings taken from on track that don't show up in dyno testing. At the Roar, that was the first full-on opportunity to assess our EcoBoost in true racing conditions. The stresses, the forces, the heat that is generated on track, can't always be simulated in a dyno cell, and there were some engine/chassis interface issues we saw at the Roar that we have addressed…that's why we test. The thing we are proud of right now is that our engineering team in Dearborn, the Roush Yates people in Charlotte, and the Ganassi and Shank teams are all working together as one team to field our Ford EcoBoost engine in its racing debut… at the most demanding endurance race of the season. That is the spirit of racing at its best."

How F1 would have dealt with no cars on the grid

How F1 would have dealt with no cars on the grid