Ford Performance and Chip Ganassi Racing have unveiled special liveries for their two Ford GTs in the 2019 IMSA WeatherTech SportsCar season-opener at Daytona. 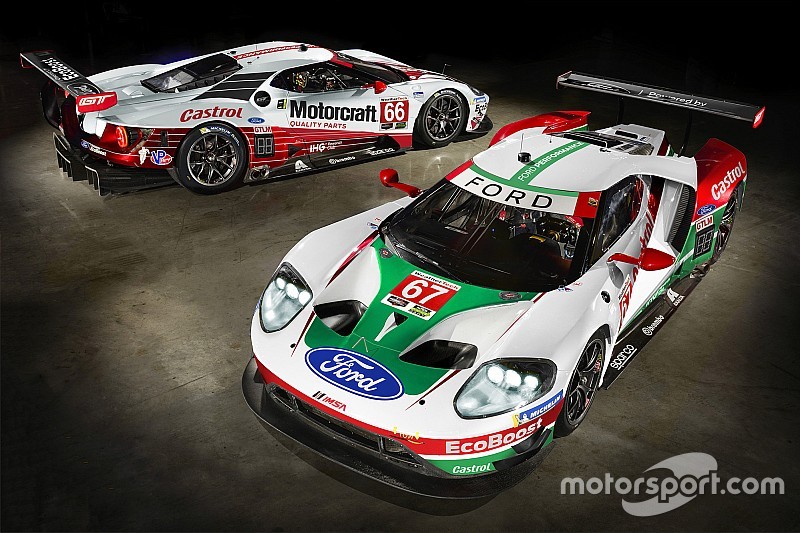 With IMSA starting its 50th season, several teams have elected to go with retro colorschemes for the series' marquee event.

The #66 Ganassi Ford honors the Roush Motorcraft Ford Mustang that won the GTO class at Daytona in 1985, in the hands of Wally Dallenbach Jr., John Jones and Doc Bundy. The #67 celebrates the most famous colors of current sponsor Castrol.

“We’re excited to show off our Ford GTs in a new way, and at the same time join IMSA in celebrating its 50th anniversary,” said Mark Rushbrook, global director, Ford Performance Motorsports.

The Ford GTs, which have won the last two editions of the Rolex 24, will revert to their traditional red, white and blue liveries following the race.

“I’m really excited and proud that Ford is doing something to celebrate the 50th anniversary of IMSA,” said Richard Westbrook who shares the #67 with Scott Dixon and Ryan Briscoe. “Ford and Castrol had a lot of successful history in those years, so for the two to come together and do something as eye-catching as these new liveries, I’m going to be really proud driving that car.

“I’ve seen enough footage of cars in that livery going around Daytona before the bus stop chicane was put in, which was a very iconic period of IMSA racing, so to be in an iconic car in that livery trying to defend our title will be something really special.”

Joey Hand, who partners with Dirk Muller and Sebastien Bourdais in car #66, commented: “It’s always cool to have something new,” Hand said. “Just having the cars in all white at the test, they looked great. I think it’ll be fun to have a throwback Motorcraft theme on the car, with those colors, I think people are really going to love it.”