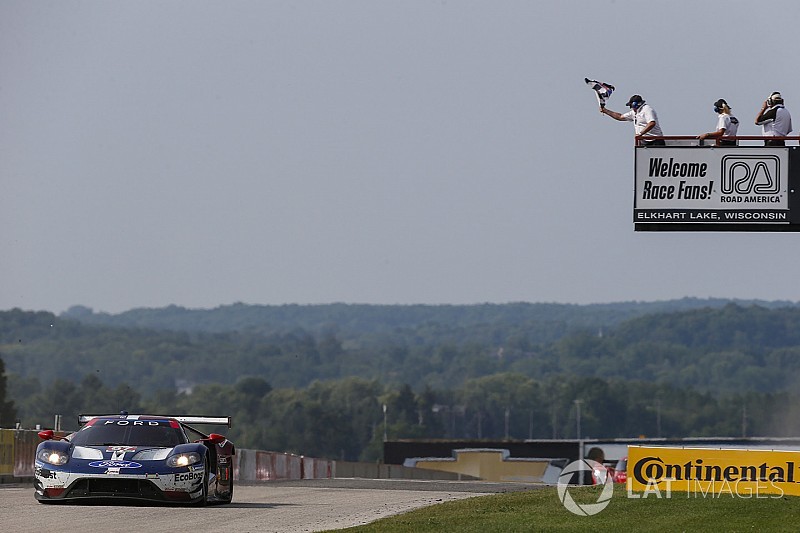 Ford’s latest victory in the IMSA WeatherTech Sportscar Championship’s GTLM class was hailed as “incredible” by Richard Westbrook – who took the lead of the championship along with co-driver Ryan Briscoe at Road America on Sunday.

Westbrook prevailed as BMW's late challenge misfired, and he scored the Chip Ganassi-run team’s fourth class victory on the bounce.

BMW’s Connor di Phillippi jumped Westbrook in the final round of pitstops, despite them both being on the same fuel strategy. The RLL-run BMW team later revealed that its refuelling rig told them that di Phillippi’s tank was full, when it was not – but that led to Westbrook charging to catch the under-fuelled M8 in the closing stages, which ran out of gas with two laps remaining.

“The last laps were mental!” exclaimed Westbrook. “I tried to keep as much pressure as I could on the BMW.

“I guess they short-filled by too much. I was so surprised he came out in front of me in the pits – I thought we had it done. He jumped me, but we were all on the same fuel [strategy], he beat me out by like three or four seconds, which was really weird.

“He was driving really well, the BMW was fast, then they told me over the radio that he had a fuel pressure issue. In the end we got our reward.

“It’s just an incredible run we’re having right now,” said Westbrook of the fourth consecutive win for the team. “The wins aren’t coming easy by any stretch of the imagination, we’re having to work for them. We didn’t have anything left today. After the first stint, we thought we’d be good on tires on the end of the stint, but the others were, too.

“It’s a track that really suits our car. It’s just a great win by the whole program. It’s a hell of a ride right now. I’m just enjoying every moment of it. And it’s getting to be ‘go time’ in the championship.”

Westbrook and Briscoe take over the lead in the drivers’ standings after the sister #66 car lost points at Road America due to a broken right-rear toe link.

“Obviously, really bad luck for the 66 guys, but it’s been a great four wins in a row,” said Briscoe. “But it’s one car wins, and the other one is not scoring the points it needs, and we’ve kind of been going back and forth. But the fact we’ve always been able to compete for wins is fantastic.”