The Chip Ganassi Racing Cadillac led the Rolex 24 at Daytona with nine hours to go, taking advantage of a caution period to take the lead away from the Wayne Taylor Racing Acura. 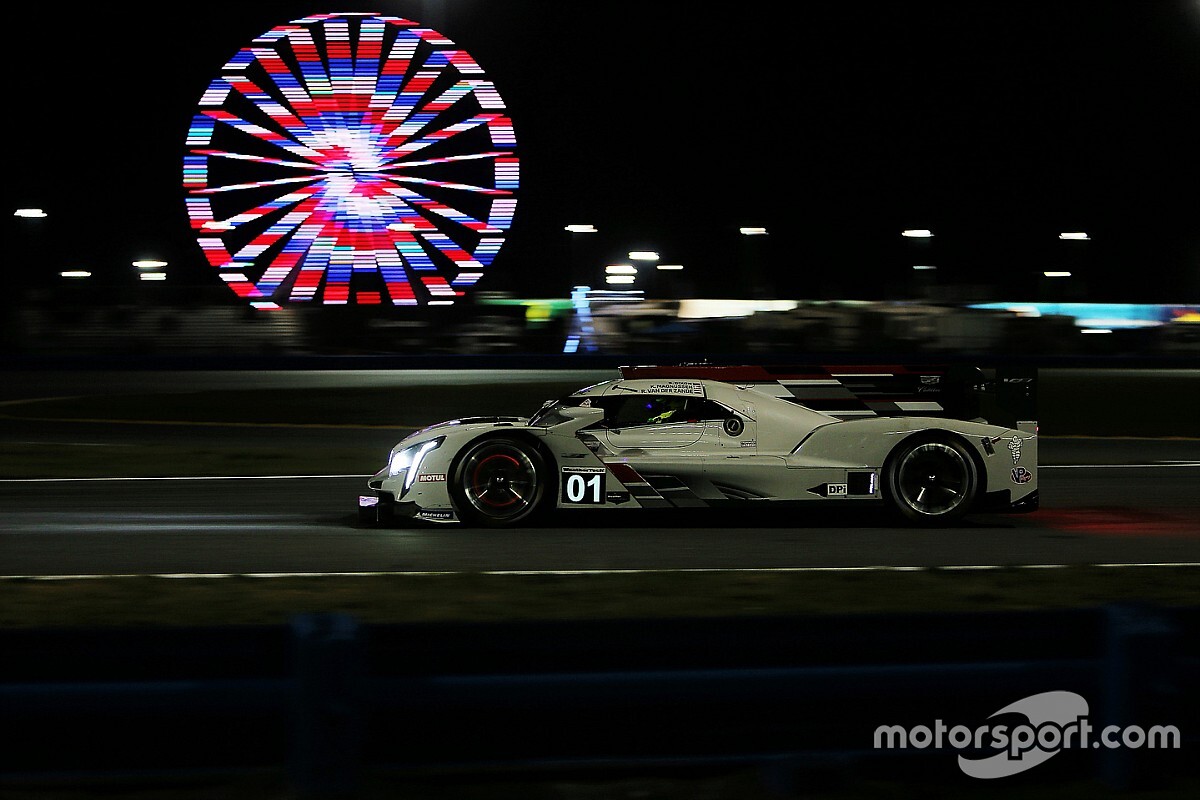 The order was shaken up by the seventh full-course caution of the race at the start of the 14th hour, caused by Mikkel Jensen spinning the PR1/Mathiasen Motorsports Oreca LMP2 after contact with an LMP3 car at Turn 3.

It prompted the #10 Acura ARX-05 of Taylor (who had taken over from Filipe Albuquerque at the start of the previous hour) to come in and take a brake change, dropping the car down the order and promoting the #48 Action Express Cadillac of Mike Rockenfeller into the lead.

But the WTR Acura was soon clawing its way back up the order, and by the start of the 15th hour it was Mike Conway in the #31 AXR Cadillac heading up Scott Dixon in the Ganassi car and Taylor, with Rockenfeller having dropped back as his stint wore on.

Dixon and Taylor both passed Conway's Whelen Engineering-sponsored car, which was appearing to struggle with lapping traffic, and when Dixon handed over to Renger van der Zande at his next stop, Taylor was promoted back into the top spot.

Another caution was triggered when Kevin Estre spun the WeatherTech Racing Porsche and pulled debris on to the track, which prompted the top five DPis to all pit.

Van der Zande, who had been passed by Kamui Kobayashi in the #48 Cadillac shortly before the pitstops, was back into the lead after the stops, with AJ Allmendinger jumping to second in the Meyer Shank Racing Acura by virtue of taking fuel only.

Conway was third in the #48 car, followed by Kobayashi and the WTR Acura, now with Helio Castroneves at the helm, just before action resumed following the caution. The Mazda continued to circulate two laps down in sixth with Oliver Jarvis driving.

In LMP2, an unknown problem that sent the Cetilar Dallara behind the wall in Hour 15 gave the Tower Motorsport by Starworks Oreca - currently with Gabriel Aubry at the wheel - an advantage of a lap over the field.

Paul-Loup Chatin was second in the Era Motorsport Oreca, locked in battle with Devlin DeFrancesco in the sole remaining DragonSpeed Oreca following the caution.

The #75 Riley Motorsports Ligier continues to lead in LMP3 by five laps with Spencer Pigot at the wheel, with the recovering Sean Creech Motorsport Ligier now the nearest competitor following an issue for the Muehlner Motorsports Duqueine.

BMW took the lead of the GT Le Mans class thanks to the 15th hour caution, which allowed the #25 car driven by Connor de Phillippi to get ahead of both of the Corvettes.

Nicky Catsburg had briefly got the #3 Corvette ahead of the sister #4 car early in the 15th hour, with the caution helping to negate what had been an advantage of some five seconds for Alexander Sims, but the Dutch driver's spell in the lead proved short-lived.

Once Sims was back ahead, Catsburg continued to stick closely to the tail of the Englishman, with the two Corvettes running in tandem until the eighth caution.

De Phillippi had been running only five seconds off the lead at the time, but was up to second at the 15-hour mark and shortly after that passed Antonio Garcia, now in the #3 Corvette.

Tommy Milner ran third in the #4 Corvette, ahead of the Risi Competizione Ferrari of James Calado, while the second BMW of Marco Wittmann got back on the lead lap after the caution.

The AF Corse Ferrari 488 GT3 that had led the class prior to the caution in the hands of Nicklas Nielsen was third, with Matteo Cressoni taking over from Nielsen.

Paul Miller Racing's delayed Lamborghini Huracan GT3 got back on to the lead lap thanks to the yellow and ran fourth with Corey Lewis on board, ahead of Jan Heylen in the Wright Motorsports Porsche 911 GT3 R and Zacharie Robichon in the Pfaff Motorsports Porsche.