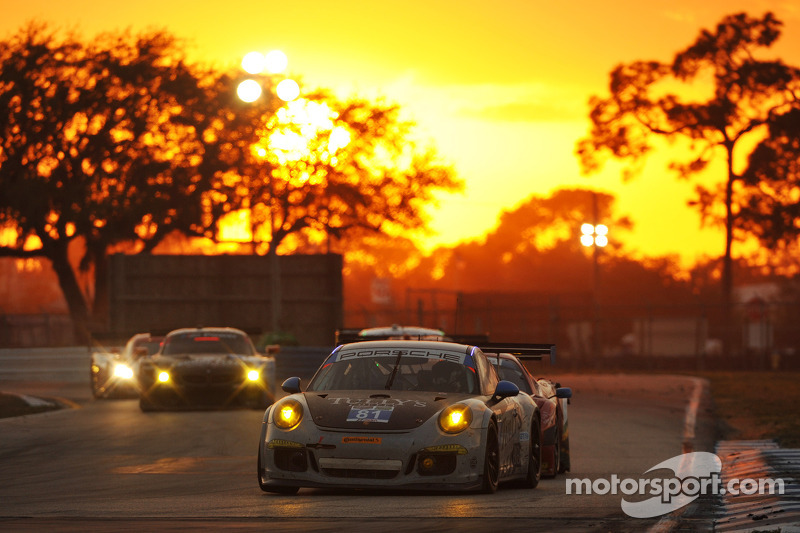 GB Autosport once again rose to the occasion in Round 2 of the North American Endurance Cup presented by Tequila Patron on Saturday.

Sebring, Fla. - After fighting to the finish in a challenging first endurance outing at Daytona in January, GB Autosport once again rose to the occasion in Round 2 of the North American Endurance Cup presented by Tequila Patron on Saturday as the team completed the Mobil 1 Twelve Hours of Sebring Fueled by Fresh From Florida with a 10th place finish. 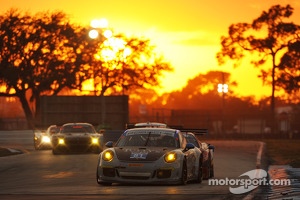 After a small mechanical issue in qualifying prevented the team from setting a time, the No. 81 Tully’s Porsche 911 GTD started from the back of the 64-car field. But the hardworking crew persevered to take the Tully’s machine all the way to the checkered flag for a top-10 finish.

Faulkner took the first turn behind the wheel of the Porsche GT America in the Mobil 1 Twelve Hours of Sebring and rocketed up the order, despite the first of what turned out to be multiple full-course cautions just 18 minutes into the race. By the time he handed the controls over to his co-driver Avenatti at the 42-minute mark he had made his way up to 12th position.

Avenatti’s stint suffered when contact from another car forced him off track in Turn 10. Fortunately, he remained calm and was able to quickly get the car back on track and return to racing and challenging for positions without having to make an unscheduled pit stop. That effort was rewarded as he moved up to run fourth in GTD before turning the Tully’s car back over to Faulkner.

Faulkner again showed his depth of race experience in the 911 and jumped up the roster in short order, consistently laying down lap times on par with and faster than the leaders of the GTD class. Just three hours into the famous 12-hour endurance event, Faulkner had the No. 81 just outside of podium position in fourth place.

Just before the four-hour mark, a quick pit stop put Faieta behind the wheel. After cycling back out into 11th place, the race went yellow again not 20-minutes later, not allowing Faieta much time to gain positions back. After spending the majority of his first stint under yellow, Faieta turned the car back over to Avenatti.

As the field went back to green-flag racing just before the five-hour mark, Avenatti was on the restart, which took him off the track and into the tires in Turn-17. After a brief stall getting the car back into traffic again, Avenatti expertly navigated the Tully’s machine back on track to make up for lost time and ultimately turned the car back over to Faulkner in 14th position.

Faulkner quickly regained two positions after jumping into the car, but had to make an unscheduled stop after a left-rear puncture in Turn 1 forced him to limp the car back to the pits for a tire change. The crew made quick work removing the mangled tired and Faulkner was back out on track setting the fastest class lap time of lap 105. Unfortunately Faulkner wasn’t able to capitalize on his run as the infamous Sebring International Raceway bit back with another flat tire in Turn 1 again.

Again, the crew quickly mended the issue and sent the No. 81 back out to race with Faieta behind the wheel. Cycling back out into 14th position, Faieta set to work attacking the cars ahead of him one by one. However the famously rough track combined with the accumulating debris on track and multiple yellows proved to be an immense challenge on already fading tires, although he did manage to make up two spots and turn the car back over to Faulkner for his final stint in 12th place.

During his final stint, Faulkner attacked the track with a vengeance, quickly running lap times consistent with the class leaders. But after the multiple flat tires and unscheduled stops put the Tully’s machine down multiple laps a hoped for podium-finish escaped the team with just two hours remaining. However, Faulkner and the entire GB crew refused to give up and continued to challenge for position, ultimately gaining a lap back and slotting into 10th place. Despite running scorching lap times in the two minutes and five second range in the final half-hour of the race, Faulkner was unable to catch ninth place and settled happily with a 10th place result.

“I’m ready for a nap right now,” laughed Team Manager Cole Scrogham after the race. “It has been crazy since we got here, some very long days. But it has been a great effort from the crew and I am very pleased with our result, especially after what happened in Daytona. We have all of the pieces here on this team and we are on the verge of jelling into something special. But for now we are pretty satisfied with a top-10 result because it is moving forward and going up. It seems like in all of these endurance races we do especially well up until between the four and six hour mark, so it would be good to get to something that maybe matches that a little better. So now we are definitely looking forward to Laguna.”

Ultimately, the GB crew again showed today in the second race of the IMSA TUDOR United SportsCar Championship that they are not only fast, but also strong and persistent, finishing a full 14 spots ahead of their starting position in spite of multiple obstacles.

Bob Faieta: “I definitely can’t complain about the finish. This is awesome, the guys did a great job. I have to say it wasn’t so much the driving today, it was really the crew doing a great job on the car. As for my last stint, it was tough. The car had a big understeer. It was really good until about halfway through my stint and I was struggling with the car. But I caught a yellow and was able to stay out on the track and get my hours in.”

Michael Avenatti: “We had some challenges but we kept coming back and made it to the finish. After how hard Daytona was, this is good for the crew to have another finish to build on. I take my hat off to Cole, Mario and the entire crew for the guts and perseverance they showed this weekend.“

Damien Faulkner: “I think the whole GB Autosport team should be really proud of themselves. It is a 12 hour race, and it’s a mammoth task. 12hours around here in many respects is tougher than 24-hours around Daytona. So to bring the car home in the top-10 after getting two punctures, especially at the place on track we got them (both in Turn 1) is just great. To come back from that and even run in the top-four is great. The pace was good. I think the boys can be proud of themselves, everyone from Michael, he had a couple of good stints, to Bobby (Faieta) as well. I think we can give ourselves a pat on the back but we aren’t going to get complacent. It isn’t about that, it is about recognizing what we have achieved and building on that.”