Daytona Beach, Fla. (17 January 2014) -- GB Autosport is ready to make a big impression next weekend as the IMSA TUDOR United SportsCar Championship stages its first-ever race with the 52nd running of the Rolex 24 At Daytona.

GB Autosport drivers Damien Faulkner, Patrick Huisman, and Bob Faieta will share the driving duties in the No. 81 Tully’s Porsche 911 GT America as the team targets a victory in the GTD (“GT Daytona”) Class.

GB Autosport’s strong driver line-up, as well as members of the entire team, will look to make the most of the common core of extensive Porsche experience in the twice-around-the-clock challenge as the 2014 Rolex 24 event marks the opening chapter of IMSA’s new era. 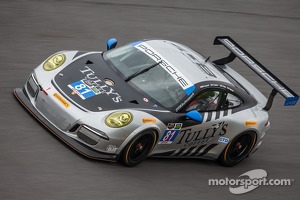 With nearly 30 entries in the class, many have anticipated GTD to be one of the most competitive categories in the IMSA structure. The Roar Test days earlier this month underscored those expectations as the timing sheets often saw the top-20 cars within one second of the fastest time of the weekend, with GB Autosport consistently in the mix.

“Since my sports car days began, the competition of this season really ranks up there,” said Faulkner, who has a multi-year commitment with the team. “The competition is unbelievable, with the number of cars and the level of strong teams. So it is definitely going to be a monster challenge for everyone-- but one we as a team are looking forward to immensely.”

The Roar test days were productive for the team, as the top-level preparation by the GB Autosport squad allowed the drivers to take advantage of every session on offer as the car performed faultlessly through the three-day event.

The Porsche 911 GT America, a new racecar built by Porsche Motorsport exclusively for this year’s new series and new GT Daytona class, is also based on the seventh generation of the Porsche 911 street car, and represents an enhanced version of the highly-successful Porsche 911 GT3 Cup.

“With a new class and a new championship with new rules and a new car, there are a lot of unknowns as we get ready for the 24, but I think the level of excitement is probably higher for this race than any other I’ve ever been a part of,” said team manager Cole Scrogham.

“This (GB Autosport) is a great group and even though many of us have worked with each other before, the Roar was our first time out as a team officially and it went really well. We learned a lot about working with this new Porsche GT America, and the drivers are impressed with how the car performed, right out of the box. We are looking forward to getting the chance to bring Porsche new success here at Daytona.”

With a pit-lane busting entry list from the four different (P, LMPC, GTLM, and GTD) classes set to race on the 3.56-mile circuit, the traffic will be a 24 hour challenge for the drivers.

The race will also rely on the training that the teams have put in through the months of preparation for the race. The challenge for the drivers is one that relies on patience, endurance, and mental acuity through the long stints. Experienced Porsche pilot Faieta also acknowledged the pure physicality of the 24 hour event and is sure the team will be capable of a strong finish in the endurance event.

With a strong driver line-up, a well-prepared team and a potent Porsche entry, GB Autosport is hoping to make history as the next era in sportscar racing is launched.