Damien Faulkner, Bob Faieta, and Michael Avenatti will again team up to share driving duties behind the wheel of the Tully’s machine in the challenging 12-hour race.

After taking multiple hits in the team's IMSA TUDOR United SportsCar Championship debut in the Rolex 24 At Daytona in January, GB Autosport is ready to come back strong with the No. 81 Porsche GT America powered by Tully’s Coffee in the Mobil 1 Twelve Hours of Sebring Fueled by Fresh From Florida this Saturday. 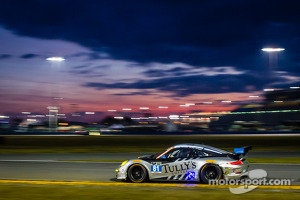 Targeting a strong start to the 2014 season with a solid finish in the Rolex 24 At Daytona, the team instead found itself at the wrong end of some tough circumstances in the opening round of IMSA competition on multiple occasions. Traffic problems arising from the high car count in the blue ribbon event saw the silver and black Tully’s entry forced behind the wall multiple times after taking hard hits from some fellow GT competitors.

While the on-track actions were frustrating for the team, the group rallied to finish the race despite the setbacks. While each of these setbacks necessitated hard work for the GB Autosport crew, the team rose to the challenge, proving their mettle by finishing the race on a positive note.

The Mobil 1 Twelve Hours of Sebring Fueled by Fresh From Florida marks the first combined event at this track for the newly formed IMSA series and the second round of the Tequila Patron North American Endurance Cup. The historical 3.74 mile track is a challenging yet exciting one for drivers. While the track is new to the team and series as a whole, both Bob Faieta and Damien Faulkner bring a wealth of knowledge and experience to the tricky track, including Faulkner’s victory in the Twelve Hours of Sebring in the American Le Mans series in 2011.

“The team made a lot of progress in Daytona and we learned a lot, very quickly,” said Damien Faulkner. “All the ingredients are here, they are in place. It is just a matter of it all coming together in harmony. There are some great people here. Sebring is probably going to be one of the toughest of the year's races, so the practice will be invaluable. The first objective for the GB Autosport team is to take the Tully's Coffee car to the finish in such a tough event.”

During the brief February break in action, the GB Autosport team made the most of the time to work on the car and not only have the Tully’s-liveried machine looking brand-new, but also to continue to get familiar with the new Porsche GT America machine.

“This is another very tough track, and with this car count, we expect it to be a very tough race as well,” said team manager Cole Scrogham, who has a lot of experience on the pit box at the fabled Sebring circuit. “We sure took a few hits on the chin at Daytona. But the team never lost focus on getting us to the finish and did the job well. Thats the same goal this week, and hopefully we can just have a clean run to the finish on Saturday.”

“Obviously we are hoping for a podium finish and I think we have a strong chance,” said Faieta. “We have Mario (Prezel, engineer) working on the car and we have the right crew in place and we have the right car, it’s just a matter of all of the pieces coming together. I’ve run this race quite a few times and I know how it can be. It can be a very rough race. You just have to stay out of trouble. You have to be aware of everything that is going on around you here. The track is tight in some spots and wide open in others so there are some places where you can actually relax and take a breather, and then there are other places on the track where you really have to be aware of what the cars are doing. And it’s Sebring, so it’s bumpy. It really is one of those places where anything can happen.”

Drivers Damien Faulkner, Bob Faieta, and Michael Avenatti will again team up to share driving duties behind the wheel of the Tully’s machine in the challenging 12-hour race. The busy weekend will see the Tully’s machine out on track for their first practice Thursday morning and a quick 15-minute qualifying session on Friday prior to the drop of the green flag at 10:15 AM (ET) on Saturday.

BMW Team RLL gets all done for Sebring