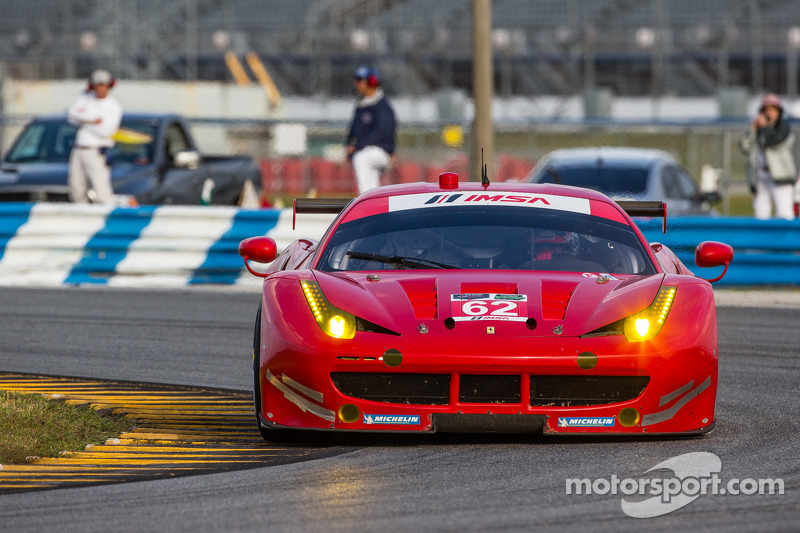 A newly re-built car, new lights and new resolve and determination to get back to what Risi Competizione does best: succeeding in endurance racing.

Houston-based Risi Competizione is all about ‘new’ for next weekend’s second round of the TUDOR United Sportscar Championship, the Twelve Hours of Sebring on Saturday, March 15.

A newly re-built car, a new driving suit (for Malucelli), new lights and new resolve and determination to get back to what Risi Competizione does best: succeeding in endurance racing.

Following the horrific accident which involved the No.62 Ferrari 458 Italia of Matteo Malucelli, from which the Italian driver impressively bounced back in a relatively short time, Risi’s car has been completely rebuilt and will be shaken down this weekend at Sebring. 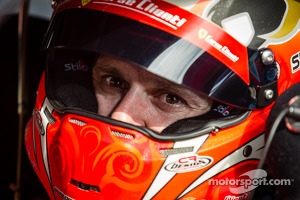 The stricken Ferrari was released from NASCAR’s investigation unit in South Carolina four days after the Rolex 24 at Daytona, and the team stripped it down to assess the extent of the damage. Approximately 70% of the car has been replaced or renewed and the wait for parts to arrive from Italy meant that the Risi Ferrari was not able to be present at the official Sebring test in February. Instead, Malucelli – who will sporting a new race suit as his previous one had to be cut away from him in hospital at Daytona – drove with Risi’s technical racing partner, Krohn Racing.

Bruni is a former winner at Sebring with Risi Competizione in 2010 and has claimed GT pole position at the Florida track for the last three years. The Roman, together with Malucelli, drove to 2nd place in GT in last year’s edition of North America’s oldest endurance race, and all three Italians are looking to improve on that result this year.

Aside from the IMSA Balance of Performance change which affects the fuel capacity of the Ferrari GTLM entries, the No.62 will be carrying new auxiliary headlights to help the drivers better negotiate the third of the event which is run in darkness. Widely acknowledged as one of the most punishing of tracks for both man and machine due to its bumpy surface, everything possible is done to assist the driver – particularly in the closing hours of the once-round-the-clock event.

The team has an impressive record at Sebring with three class wins and a 2nd place in the last six appearances. It is a record that every single one of Risi’s team members has the resolve and determination to maintain and prolong…even in the face of the toughest opposition yet.

Sebring is well known for being a very bumpy and difficult track to set up a car for. What is the secret to a fast lap? “I can confirm Sebring track is very bumpy and you have to make sure you have a very comfortable seat for all of you in the car!! I don't have a real secret for a fast lap but for sure you need to have a really good rear of the car and good braking stability. I hope this year I will be able to do the same as last year [capture GT pole position]...”

We will be using some new auxiliary lights for night running. What advantage will these give us? “You have to take any advantage you can to be successful at Sebring and we will have many hours of darkness so good headlights are very important. Last year we were struggling with the visibility so Risi has got these new lights which I am sure will be a step ahead.”

We are all very happy to see you recovered from the accident at Daytona. Tell us how you felt when you first went out on track at the Sebring test? Do you have any neck pain [whiplash] or are you back to 100%? “I felt good at Sebring although it was a little strange after the crash, but not bad. My neck is quite good and about 90% I would say. My back and everything else is completely fine…actually, not everything else. I broke a tooth in the accident which still needs to be fixed and I hate going to the dentist!!”

Risi was very close to the GT win last year. What do you think the team has to do this year to climb to the top step of the podium? “This year there are some new cars, like the Porsche 911 and Corvette C7R, but I think we need to do what we were on track to do before the accident in Daytona. We have a good car, team and drivers and we will do our best to do better than last year if possible. It’s really important to start to make some points for the championship.”

It’s fair to say you haven’t yet conquered Sebring in your two previous appearances. What is it about this track that makes it so difficult? “First of all, I like it as a track and have enjoyed driving there but it’s very demanding physically and mentally. There are lots of bumps and different surface changes so it’s not easy to manage the behaviour of the car and the bumps are not good for the body or

Despite our short time in the Daytona race, how do you think we compare to the competition in the GTLM class? “I think at the moment, considering the Daytona race and the test at Sebring, it looks like the Porsche is really strong but so is the new Corvette, the Viper and BMWs have always been good on this challenging circuit. It’s a very tough race but our car is good, we have a good team/car/tire package and, of course, driver line-up so I’m looking forward to it.

With a smaller fuel capacity than others, we will have to make sure our pit stops are spot on. Will you make any changes to how you do driver changes? One thing is for sure: we will do a LOT of practice for driver changes, and maybe look at making small modifications to the belts or connections or whatever it takes to make the changes as quick as possible. Like always the race can be won or lost in the pits.”